Growth of eurozone manufacturing cooled slightly in July after a record-breaking expansion during the second quarter. Having beaten prior records for a fourth straight month in a row during June to reach 63.4, the IHS Markit's eurozone manufacturing PMI, fell back to a four-month low of 62.8 in July. However, that was still higher than anything seen prior to April in the survey's 24-year history. 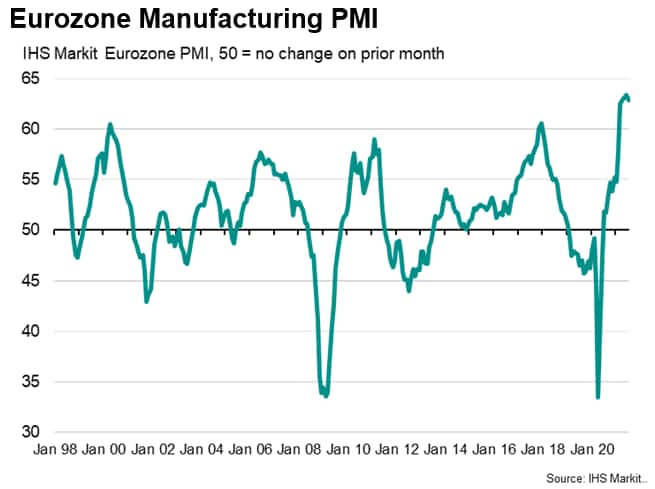 Some moderation from such elevated heights should therefore not itself be a major concern. But a growing worry is that the July survey brought further signs that manufacturers and their suppliers are struggling to raise production capacity fast enough to meet demand.

Although growth of demand has come off the boil slightly as the initial boost from the reopening of the economy fades, the July survey showed inflows of new orders outstripping production to an unprecedented extent in the survey's 24-year history.

July consequently saw another near-record jump in backlogs of uncompleted orders, and that's despite firms taking on staff at an unprecedented rate in the survey's history during the month. Many firms clearly want to produce more goods but are simply unable to due to constraints. An analysis of reasons for production falling by firms reporting lower output across the eurozone during July show that some 47% attributed the decline to shortages of components and other inputs. A further 3% reported that output fell due to insufficient staff numbers. This suggests that half of all cases of falling output were linked to supply side constraints. Note that a further 4% reported that output had fallen as a result of sales being hit by customers baulking at higher prices. 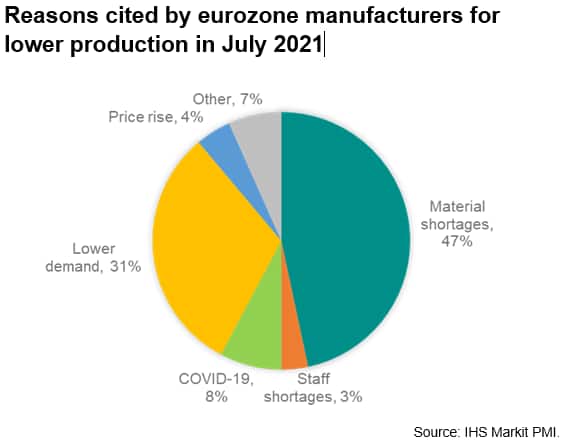 Input shortages in fact worsened at a near record rate again in July according to the survey's suppliers' delivery times index - a key barometer of inflationary pressures, which remains indicative of a strong sellers' market.

Sub-50 readings of the suppliers' delivery times index mean it's taking longer for suppliers to provide goods to factories, on average. This tends to result in higher prices, as manufacturers are willing to pay more to ensure sufficient supplies of key inputs.

The index is therefore inverted in the following chart, when it is plotted again the eurozone manufacturing PMI input price index, to show the strong correlation between supply conditions and price trends. 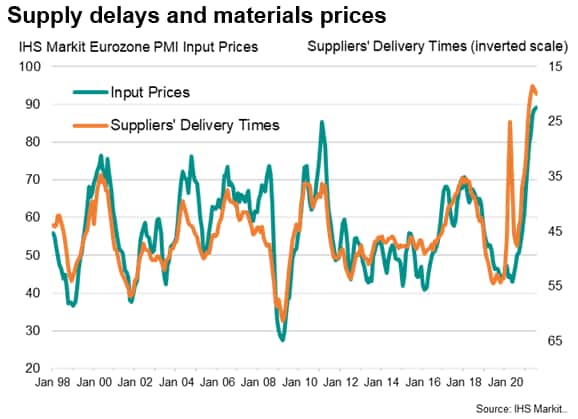 Back at the start of July, we looked in more detail at the survey's capacity indicators and the degree to which the recent spike in manufacturing prices looked transitory, but as yet price pressures show no sign of relenting. July saw yet another record increase in both input costs and prices charged for goods.

Mounting concerns about how the Delta variant poses a further threat to supply chains and staff availability have meanwhile helped push future growth expectations to the lowest so far this year.

Until supply chain security concerns can be alleviated, it is likely that prices could remain high for many inputs as firms seek to safeguard against future supply problems limiting production. After all, one thing that the pandemic has reminded us of is that the cost of having to shut an entire production line down due to a lack of one key component will have a strong bearing on what a manufacturer is prepared to pay for that component.