The euro area's manufacturing sector remained deep in decline at the start of the second quarter. Although the headline PMI rose for the first time in nine months, up from 47.5 to 47.9, the April reading was the second-lowest seen over the past six years, signalling a deterioration of overall business conditions for a third successive month. 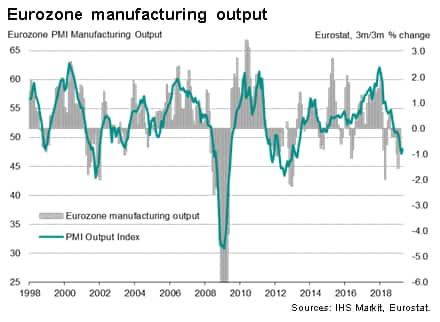 Highlighting the depth of the downturn, the survey's output index is indicative of the official (Eurostat) gauge of factory production falling at a quarterly rate of approximately 1%, setting the scene for the goods-producing sector to act as a major drag on the economy in the second quarter.

The weakness was again led by a particularly marked drop in export orders (including intra-regional trade), which have now fallen for seven successive months. Overall inflows of new orders likewise deteriorated for a seventh straight month.

The downturn remained the fiercest in Germany, with Italy and Austria also in decline and France stagnating. Spain's expansion remained only modest. 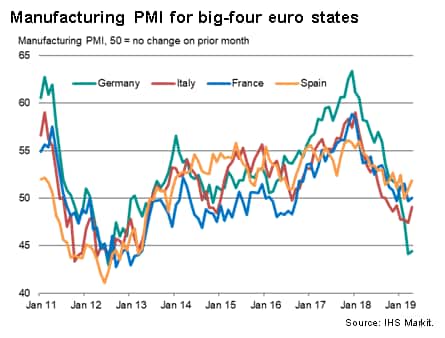 Tentative signs of bottoming out

Some encouragement can be gained from the headline PMIs having risen in all four largest euro member states in April. Forward-looking indicators such the gap between output and new order inflows and the orders-to-inventory ratio have also all come off their lows, hinting at a tentative bottoming out of the downturn. 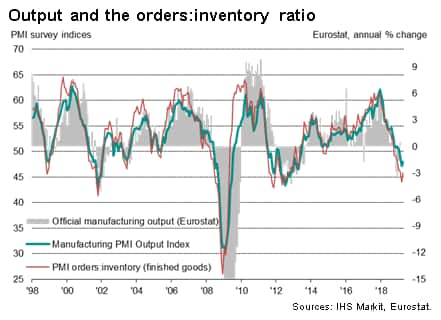 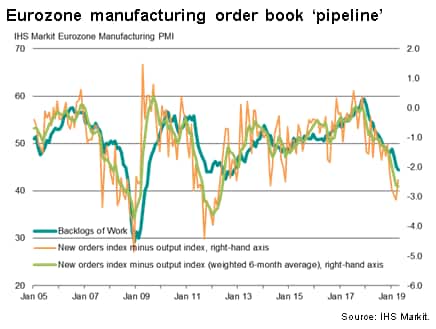 However, it remains too early to call a definite turning point, especially as future sentiment remains around its lowest level since 2012, hinting that the manufacturing downturn will persist in coming months.

The steepest fall in backlogs of work since 2012 meanwhile suggests firms will increasingly look for cost-cutting opportunities and exercise increased caution with respect to hiring. 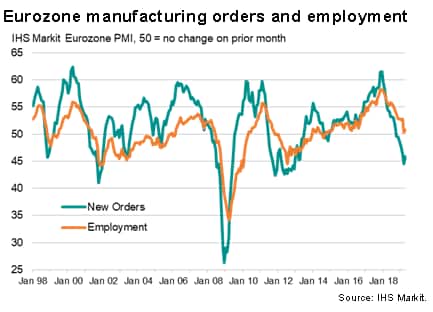 The data add to worries that the manufacturing sector has failed to rebound with any conviction from one-off factors that dampened activity late last year, suffering in the face of headwinds such as slower global demand growth and subdued economic sentiment.

While the official (Eurostat) data appear to be on course to register growth of manufacturing output in the first quarter, the PMI suggests this bounce largely reflects pay-back from a steeper downturn than signalled by the PMI in the fourth quarter: the official data saw output fall 1.0% in the three months to December while the PMI signalled a 0.6% rise.

Such disparities between the PMI and official data are invariably the result of large changes in production in specific sectors (in this case, primarily autos), which are not fully captured by the PMI methodology, but which tend to reverse out in future months. The advantage of the PMI is that the survey provides an accurate guide to the broader underlying growth trend, looking through the noise of the volatile official data.

As such, any recovery signalled by the official data in the first quarter looks set to be only temporary, giving way to renewed weakness in the second quarter.

The April survey also saw some interesting price developments. Although average input price inflation ticked up for the first time in six months, likely driven by higher oil prices, the rate of inflation remained the second-lowest since September 2016. 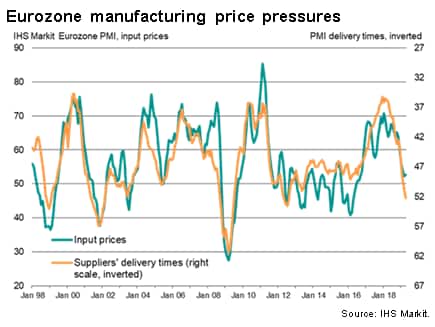 Furthermore, an easing of supply chain delays points to the development of a buyers' market for inputs, created as a result of waning demand for supplies - the amount of inputs bought by manufacturers fell at the joint-steepest rate for six years. Such a market suggests suppliers will increasingly seek to compete on price to stimulate sales. Price cutting was also increasingly evident in charges levied by manufacturers themselves, which rose at the slowest rate since late-2016.