Eurozone leads as US and UK see slower growth, Japan and Australia contract

Flash PMI surveys showed mixed trends in July, with COVID-19 once again playing a key role in divergences, ranging from growth accelerating to the fastest for over two decades in the Eurozone to economic contraction in Australia and Japan. Across the board, however, a common theme was the issue of supply constraints limiting capacity and driving prices higher, as well as the business outlook darkening amid growing concerns over the Delta variant.

For the first time since the pandemic began, the fastest expansion of business activity was seen in the Eurozone, where growth hit a 21-year high as the economy continued to reopen and vaccine progress buoyed confidence. Service sector growth accelerated to a 15-year high, driving the improvement. Although manufacturing also reported strong growth, it's expansion was again constrained by near-record supply delays, as measured by the survey's suppliers' delivery times index.

Constraints were even more evident in the UK, where problems of longer lead times for raw materials and components were exacerbated by shortages of staff, often linked to the rising tide of COVID-19 infections and Brexit. Measured across both manufacturing and services, UK growth fell to the slowest since March as both sectors were increasingly affected by the fresh Covid wave.

Although slowing, the UK nevertheless continued to record strong growth as Covid-related restrictions were eased during the month despite the rising infection numbers, with the full removal of containment measures on 19th July.

In contrast, Australia tightened up its lockdown measures to fight the rise of the Delta variant, resulting in a steep downturn of business activity in Australia. Services were especially hard hit.

Similarly, Japan remained in contraction as virus containment measures continued to be applied while the country fought it's fourth wave of infections.

Growth meanwhile continued to cool from its recent peak in the US, though in both manufacturing and services the rate of expansion remained impressively strong despite raw material and labour shortages. 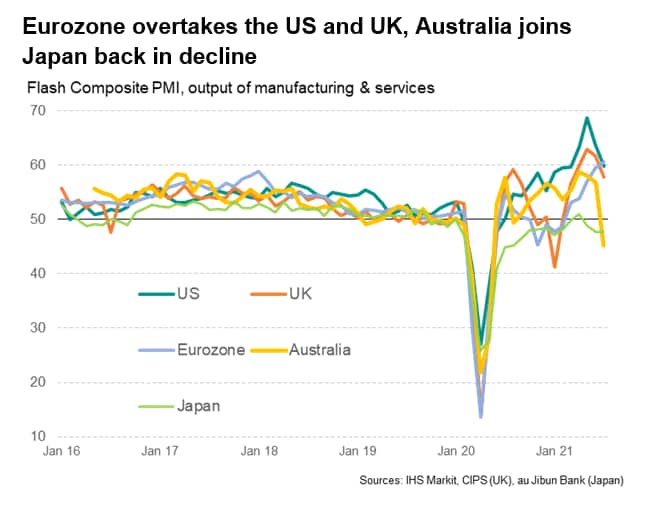 With the UK economy facing especially marked supply constraints as Brexit issues added to pandemic related supply problems, it was perhaps little surprise to see the UK also reporting the steepest jump in input prices when measured across both manufacturing and services (the latter gauge including wages and salaries). Japanese manufacturing input prices meanwhile showed the largest jump since 2008. Prices also rose sharply in the US and Eurozone, often linked to constraints causing supply to lag demand, though in both cases the rates of inflation moderated slightly. 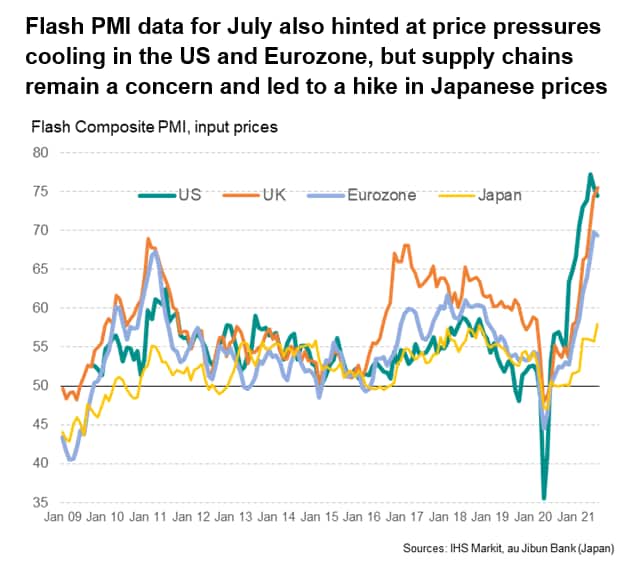 A common theme across all surveys, however, was a cooling of business confidence about the year ahead. Some pull-back in optimism is of course only to be expected after elevated levels of confidence surrounding the vaccine roll-outs, but the July surveys saw an increase in companies reporting growing concerns over the spread of the Delta variant. 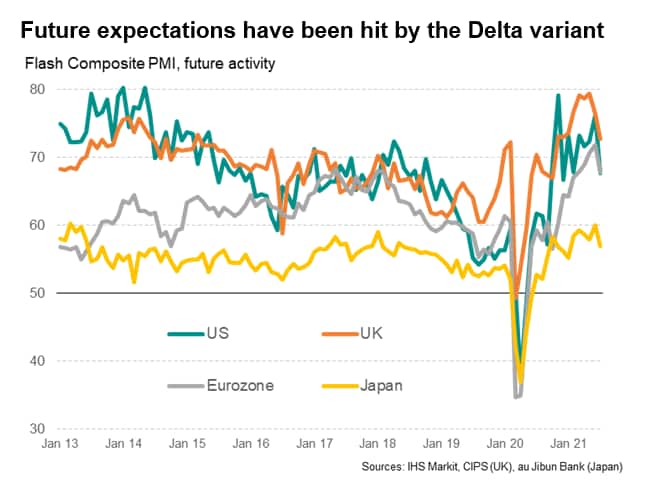 One concern is that this drop in confidence could feed through to reduced spending, investment and hiring, adding to the possibility that growth could slow further in coming months.

Another concern is that the rising wave of Delta-variant infections will hit supply chains in the Asia Pacific region in particular, as hinted at by the Australian flash PMI data, which could mean capacity is constrained for longer than might otherwise have been expected. Under such a scenario, price pressures could prove more problematic for longer. (See "Delta variant spread poses key risks to global economic recovery" | IHS Markit).

Final PMI data for worldwide manufacturing (due on 2nd August) will therefore provide important clues as to the health of the global supply chain.