Eurozone leads as US and UK growth wanes, Japan and Australia contract

Flash PMI surveys showed the eurozone enjoying the strongest expansion of the major developed economies in August. The eurozone has also avoided the lockdown measures associated with rising COVID-19 cases which dampened growth in the US and led to deepening downturns in Japan and Australia. The eurozone is also benefitting from fewer supply and labour market constraints than the UK and US, where growth slowed sharply due to these shortages, with prices rising commensurately higher as a result.

The eurozone enjoyed the fastest growth of the world's major economies for a second month running in August, according to the flash PMIs, with growth slowing sharply in both the US and UK while Australia and Japan slipped into deeper downturns. 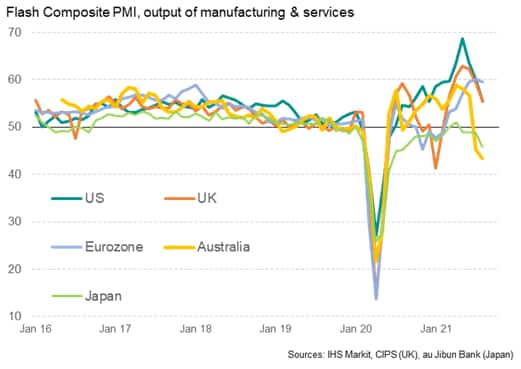 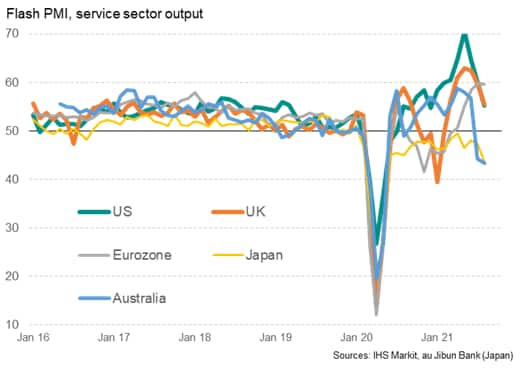 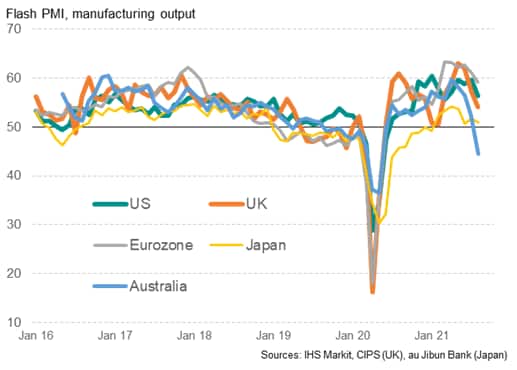 The eurozone is showing particular resilience to the Delta wave of COVID-19 so far, with growth slowing only slightly in August compared to July's 15-year high. In fact, the average readings for the third quarter so far puts the bloc on course for its strongest expansion for 21 years. Service sector growth held close to 15-year highs as lockdown measures were eased to the lowest since the pandemic began, helping offset some of the slowing in manufacturing, where eurozone producers reported ongoing supply constraints to have been a principal cause of weakened performance. The overall pace of manufacturing expansion nevertheless remained one of the strongest recorded over the past two decades.

In contrast, growth slowed sharply in the UK where - although lockdown measures were also reduced to pandemic-lows - shortages of materials and labour were cited as key factors dampening growth in both manufacturing and services. The overall rate of expansion consequently slowed markedly for a third month running to the lowest since the recovery from the latest lockdown began in March.

Growth likewise cooled for a third successive month in the US, dropping to the lowest seen since December due to a combination of materials and labour constraints plus rising virus infections due to the increased spread of the Delta variant. The service sector was hardest hit by the surge in COVID cases, though manufacturing production remained severely constrained and lost momentum with producers once again unable to meet strong demand.

Even worse was seen in Japan, where output fell at the sharpest rate since August of last year, dropping for a fourth successive month as the country grappled with a rise in COVID-19 cases. Only marginal factory output growth was accompanied by a steep drop in service sector activity.

Business activity across Australia declined for a second month running in August, with manufacturing and services posting the largest monthly declines since May of last year. Survey respondents signalled that the increase in COVID-19 cases, underpinned by the Delta variant, and the corresponding lockdowns across various Australian states in August continued to dampen demand and output.

The underperformance of both Japan and Australia can be easily explained by both countries having vaccination rates far lower than seen in the US, eurozone and UK, and also having higher COVID-19 containment measures, the latter reflecting tightened restrictions to curb the Delta variant spread. While covid containment measures in the eurozone and UK fell to the lowest since the pandemic began in August, and only a modest tightening was seen in the US relative to July's low, lockdown measures have been tightened in both Australia and Japan in recent months to the highest for over a year. 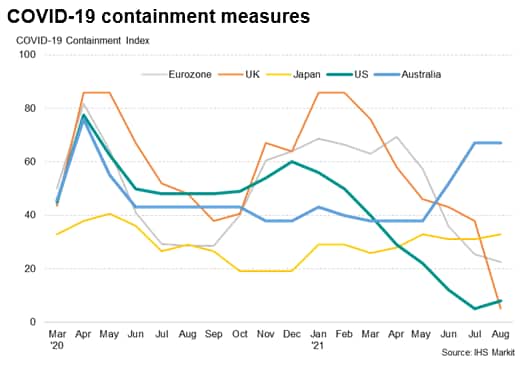 The eurozone's outperformance can meanwhile be at least partially linked to its job market: whereas employment growth slowed to a 13-month low in the US as firms reported difficulties finding staff, jobs growth boomed in the eurozone, matching July's 21-year high.

Similarly, although record employment growth was seen in the UK, buoyed by the country's furlough scheme continuing to be unwound, this failed to meet firms' demand for labour. The number of companies reporting that output had fallen due to staff or materials shortages has risen far above anything ever seen previously in more than 20 years of UK PMI survey history. Far fewer labour market shortages were recorded in the eurozone. 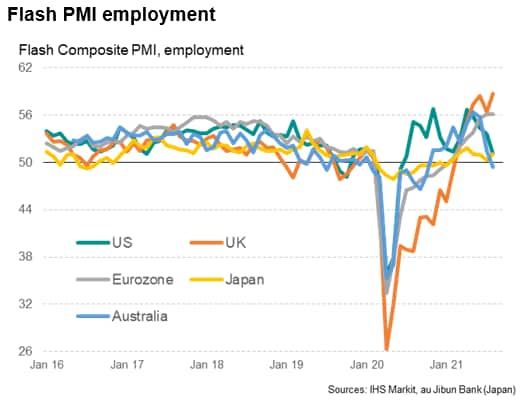 Variances in materials supply constraints also played a role in driving growth divergences: while bottlenecks grew at a reduced (though still marked) rate for a second month in the eurozone, supply delays worsened to near-record and record highs in the UK and the US in August, respectively. 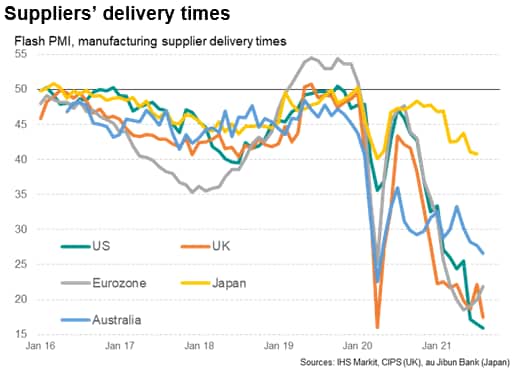 The causes of these growth divergences also had a bearing on inflation trends. With the US and UK seeing growth constrained by materials and labour shortages to greater degrees than the eurozone, Japan or Australia, input cost pressures also rose to greater extents as a result of demand running ahead of supply. 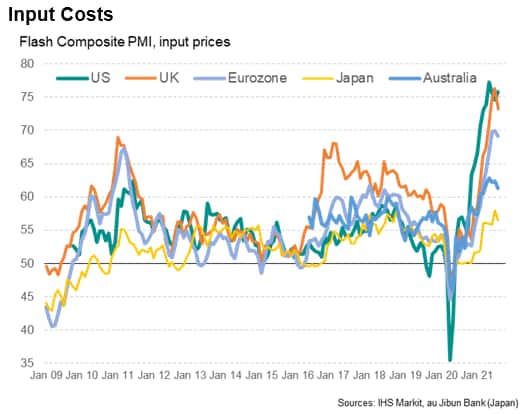