Households' savings reached an unprecedented level in 2020. The eurozone savings ratio increased from an average of 12.8% in 2019 to a peak of 24.6% during the second quarter of 2020. To put this figure in context, the savings rate averaged 12.8% between 2000 and 2019, while its previous peak had been 14.2% during the third quarter of 2009 (see Chart 1). A key factor behind the sharp increase in savings has been the success of fiscal policy in protecting households' incomes. Eurozone households' gross disposable income held up substantially better than in previous recessions despite the exceptionally large decline in activity (see chart 2). 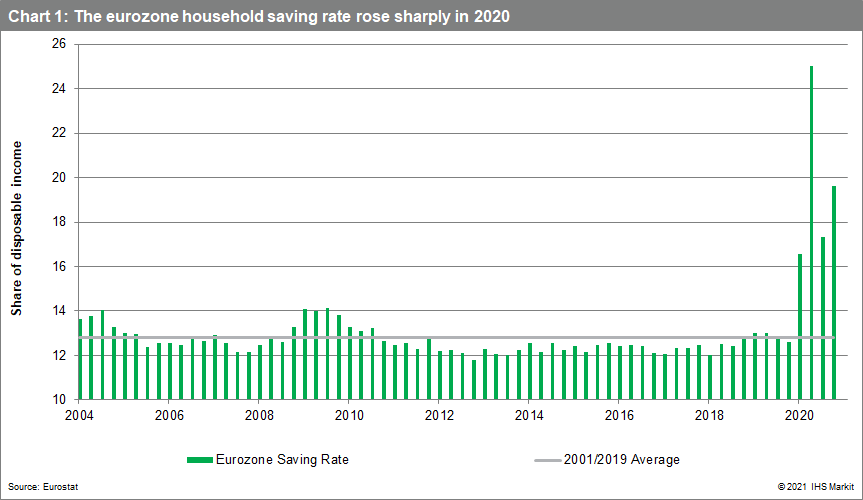 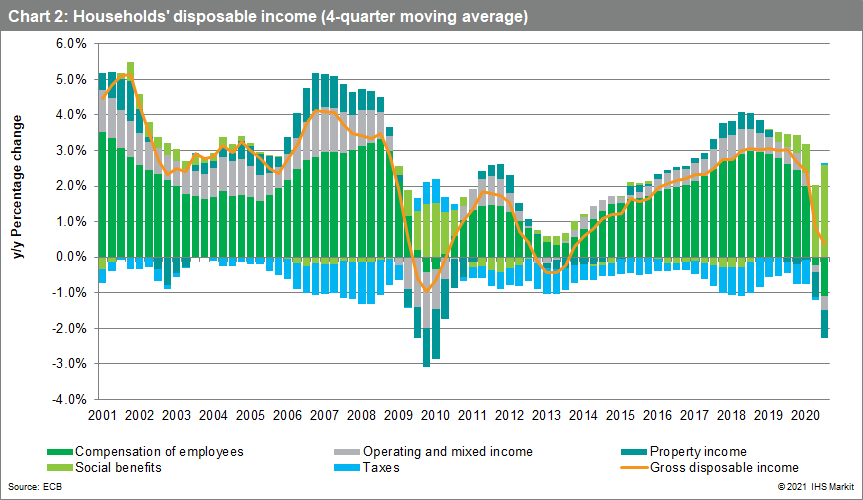 Will the large cushion of savings result in a consumer-led recovery?

While consumer demand struggled across the eurozone in 2020, the substantial increase in savings opens the door to a rapid and large recovery once restrictions are unwound. The impact may be strong given that a large majority of the excess savings were 'forced' (i.e., resulting from the impossibility to purchase certain goods or services during periods of lockdown).

Our estimates suggest that they accounted for around 85% of the total increase in households' savings in 2020. In nominal terms, this would equate to EUR432 billion, or 3.8% of the eurozone's GDP in 2020. In principle, this is good news: by their nature, 'forced' savings should be more ready to be spent once the restrictions are lifted. On this respect, vaccination programmes will have a key role to play.

While the initial slow progress on vaccination rollouts is likely to delay the rebound in consumption, vaccination programmes will still play a key role in driving the recovery in consumer spending (see chart 3). First, by allowing a more permanent opening of the economy once pressure on healthcare systems eases and a sufficiently large proportion of the adult population is vaccinated. This should lead to a substantial decline in 'forced' savings. Second, vaccines are likely to boost confidence in the recovery. Successful vaccine rollouts would substantially lower the probability of measures having to be tightened markedly, at least in the foreseeable future. This should also lead to a decline in precautionary savings, assuming that labour market conditions do not deteriorate markedly. 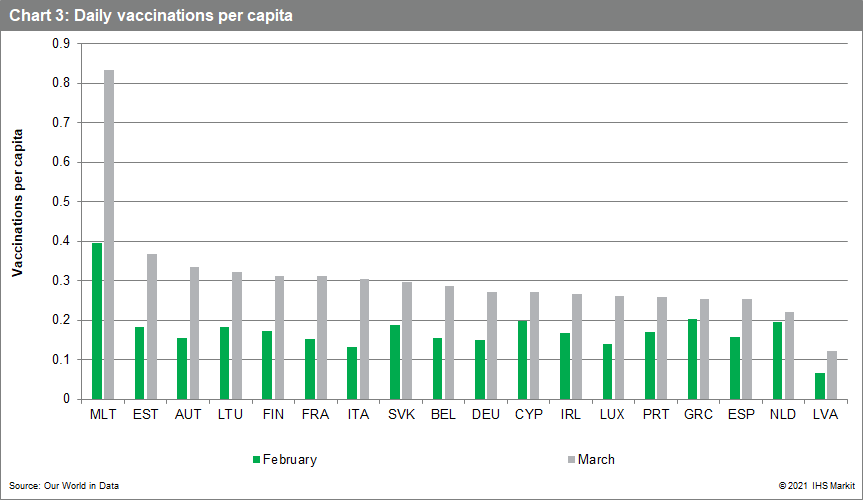 The labour market and households' expectations of its future dynamics are among the most important determinants of household spending. The fallout from the COVID-19 virus shock presents an unusual situation as the unemployment rate increased by much less than would be historically consistent with an economic shock of this magnitude. This has been partly the result of large declines in labour participation rates as potential job seekers did not actively look for a job during periods when a large share of the economy is closed because of lockdowns. Moreover, governments put in place measures to mitigate the impact of the pandemic on the labour market, with the most important ones being the furlough schemes introduced in several countries.

On a positive note, the latest survey evidence suggests that despite the deterioration of economic conditions at the start of 2021, firms' hiring intentions are resilient (see Chart 4). However, there are several reasons to be cautious. While the extensive government support measures have sustained employment levels, most of them are only temporary and set to be gradually withdrawn once restrictions are eased. This is likely to lead to an increase in the labour force as job seekers re-enter the labour market, which, in turn, will put upward pressure on the unemployment rate. The asymmetric impact of the pandemic on labour markets, which particularly affected lower-income households (who have a higher propensity to consume), is also likely to keep savings relatively elevated. 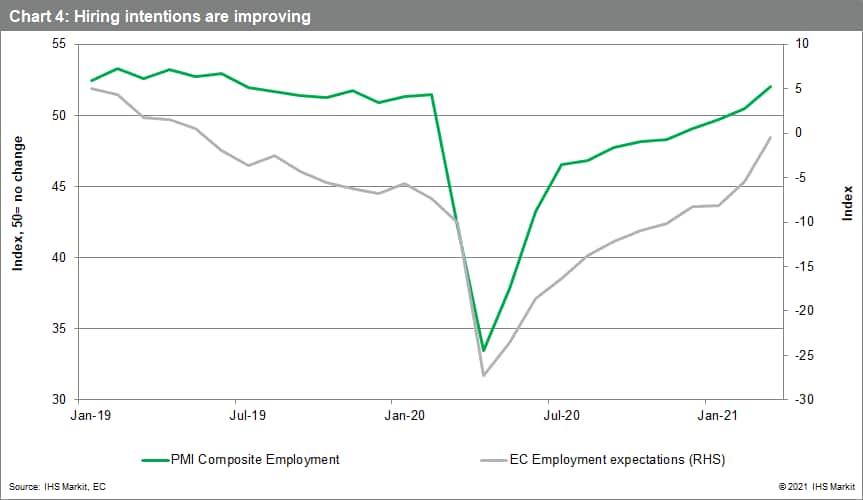 Studies also suggest that recoveries from recessions where the fall in spending was concentrated in services, such as the current (see chart 5), tend to be softer compared with recessions with a larger decline in consumption of goods. While consumption in services is likely to grow sharply once restrictions are eased, the rebound is unlikely to make up for the losses fully. 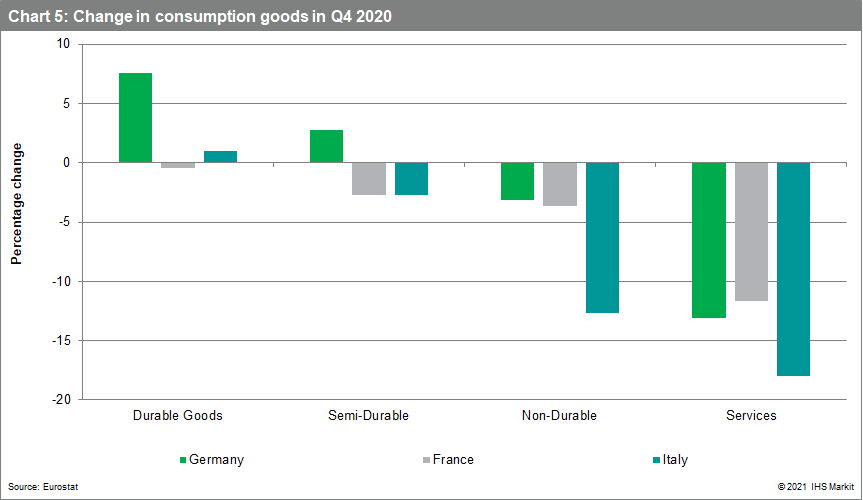 Bottom line: Savings rates likely to decline substantially during the second half of 2021 but remain above their pre-pandemic level for a prolonged period of time

We expect a consumer-led growth spurt to materialise in 2021, although the quarterly peak is likely to be smaller than during the third quarter of 2020 when consumption rose by 14.0% quarter on quarter (q/q). Our current baseline projections assume that this recovery is likely to start late in the second quarter of 2021 as COVID-19 restrictions are gradually eased.