Eurozone business activity growth slowed for a second successive month in January as the spread of the Omicron variant took an increasing toll on the region's economy. Although an alleviation of supply chain delays provided a welcome boost to manufacturing production, renewed COVID-19 restrictions led to a marked slowing in service sector growth.

While average prices charged for goods and services rose a rate unsurpassed in the series so far, an easing of producer input cost inflation hinted at a cooling of upward raw material price pressures. 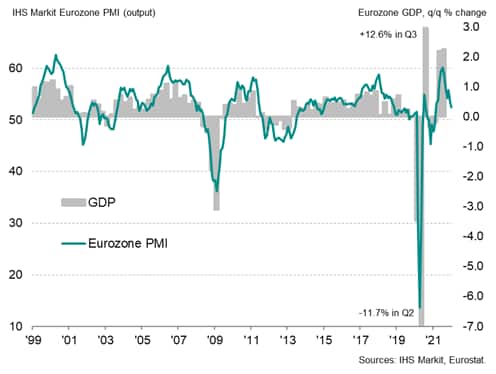 The headline IHS Markit Eurozone Composite PMI® dropped two points from 55.4 in November to 53.4 in December, according to the 'flash' reading*, indicating an easing in the rate of output growth to the lowest since March. The decline takes the average reading for the fourth quarter to 54.3, substantially lower than the 58.4 average seen in the third quarter. As such the PMI data point to a marked weakening of economic growth in the closing quarter of 2021, albeit with the rate of growth remaining above the survey's pre-pandemic long-run average of 53.0.

The headline IHS Markit Eurozone Composite PMI® dropped for a second month running at the start of 2022, down from 53.3 in December to 52.4 in January, according to the 'flash' estimate*. The latest reading indicates the slowest rate of output growth since the recovery from lockdowns in early 2021 began last March.

However, the slowdown masked wide variations in performance by sector. Service sector output growth slowed sharply for a second month running, dropping to its lowest since last April, amid soaring COVID-19 infection rates. The rapid spread of the Omicron variant led to the reimposition of many measures to contain the virus in recent weeks, notably in Germany, France, Italy and Spain, which adversely affected consumer- and hospitality-oriented businesses in particular. According to IHS Markit's COVID-19 Containment Index, restrictions in January have risen to their tightest since May of last year across the eurozone. Companies also often reported that staff absenteeism due to illness or the need to self-isolate also inhibited activity.

Tourism and recreation activity consequently fell at a rate not seen since last February, with transportation and media work also in decline. However, many other business service providers and financial services firms continued to report solid growth, being less affected by the Omicron wave than consumer-facing industries.

Manufacturing growth meanwhile accelerated to the fastest since last August. Although staffing issues curbed output in some factories, supply constraints eased, helping boost production in many firms. Average supplier delivery delays lengthened to the least extent since January of last year, with fewer items reported in short supply and shipping delays showing signs of easing. Growth was recorded in all major manufacturing sectors, including a second consecutive month of rising production in the auto sector. 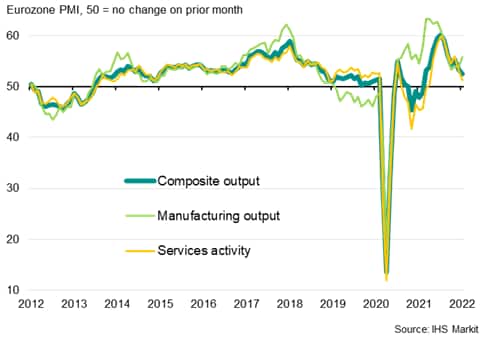 By country, business activity rebounded in Germany after a slide into mild contraction in December, registering the strongest expansion since September thanks to a surge in factory production and a return to growth for the service sector. In contrast, growth in France hit the lowest since April, reflecting a near-stalled factory sector and a sharply weaker service sector performance. Meanwhile, growth ground almost to a halt across the rest of the region as a whole amid a renewed contraction of services activity. 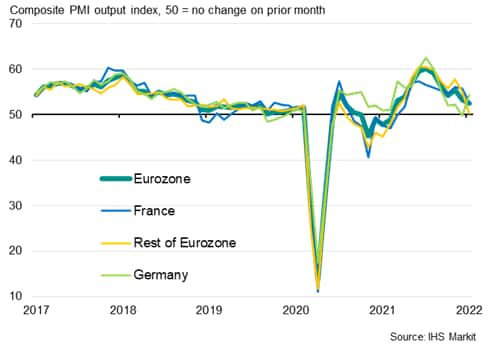 Average selling prices measured across both manufacturing and services meanwhile picked up to grow at a rate matching the survey all-time high recorded in November. A new record was seen in the service sector as costs were driven higher by energy and wage costs. Prices charged for goods leaving the factory gate also rose at an increased rate, just shy of November's survey high, though an easing in manufacturers' input price inflation to the lowest since last April was also reported, linked in part to the alleviating supply crunch. 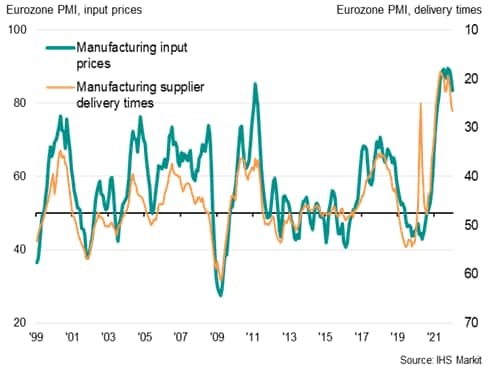 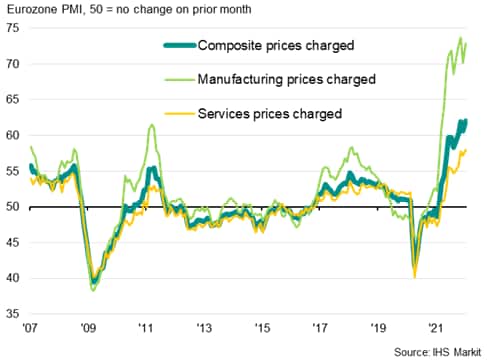 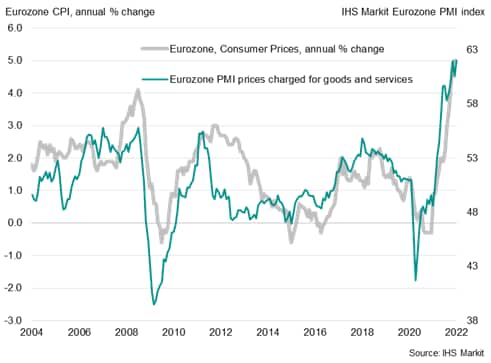