Next week sees the release of flash Eurozone PMI data on the same day that the European Central Bank's Governing Council meets to decide on monetary policy. The policy meeting and data will be eyed for insights into whether the recent deterioration in performance of the eurozone economy has persisted at the start of 2019, and whether the central bank may adjust its policy stance and guidance.

The ECB ratcheted up its hawkish rhetoric in 2018 after the economic data showed a surprisingly strong start to the year, only to see the numbers deteriorate as the year proceeded. The worsening economic trends failed to prevent the ECB going ahead with a planned ending of its quantitative easing programme in December, but with the latest PMI survey data indicating the slowest rate of eurozone business growth for over four years alongside a marked easing in price pressures, policymakers are at least starting to acknowledge increased downside risks to the economy.

The headline IHS Markit Eurozone Composite PMI® fell from 52.7 in November to 51.3 in December, its lowest since November 2014. The output index is consistent with a quarterly GDP growth rate of just 0.1% in December alone.

A PMI-based 'price pressures' gauge, an inflation indicator based on input costs and supplier delivery times (the latter being indicative of capacity utilization), meanwhile fell from 60.5 to 57.9, its lowest since October 2016.

These two indicators have in the past been very useful guides to ECB policy changes (see charts). Any move above 57 for the PMI composite output index usually represents hawkish territory, while readings below 51 are more consistent with additional stimulus. 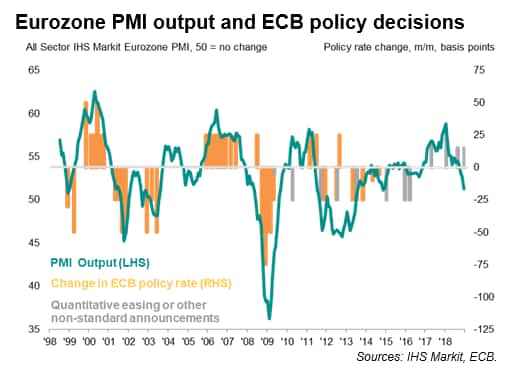 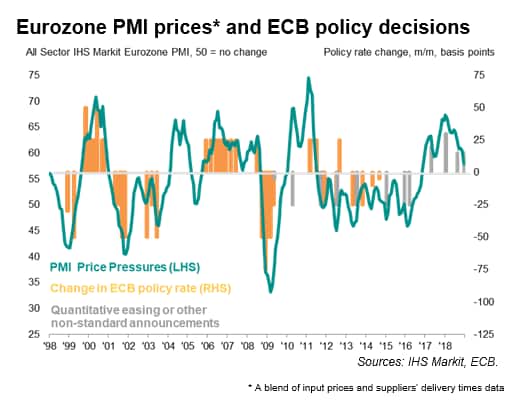 However, the rate prescription also depends heavily on price trends. In that respect, an elevated price pressure index above 60 is indicative of the ECB mulling rate hikes while a drop below 50 is dovish.

At the moment, both output and price indicators have moved firmly out of hawkish territory at 51.3 and 57.9 respectively, though are not yet fully consistent with the ECB loosening policy.

A more comprehensive statistical analysis of the relationship between PMI price and output data against historical ECB decisions confirms that the survey data have moved into territory more aligned with policy stimulus rather than tighter policy, though again the signals are not compelling.

Given the deteriorating data flow, ECB head Mario Draghi has at least now acknowledged that the balance of risks to growth has moved to the downside. "It's a slowdown, which is not heading towards a recession, but it could be longer than expected", Draghi remarked in a speech on 15th January.

The central bank also recently downgraded growth projections for both 2018 and 2019, albeit still expecting to see a 1.7% expansion in 2019 after 1.9% growth in 2018. Such a view may soon seem optimistic unless the data pull higher at the start of 2019. IHS Markit is currently forecasting GDP growth of just 1.4% in 2019. In that respect, January's PMI data will therefore provide the first piece of the puzzle in the picture for the economy in 2019. 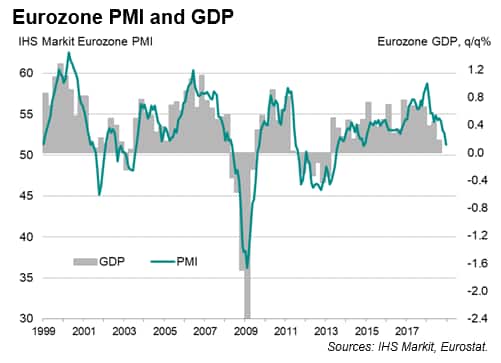