Eurozone business activity growth slowed sharply to a six-month low in October amid increasing supply bottlenecks and ongoing COVID-19 concerns, dropping most markedly in manufacturing though also cooling in services. Survey-record price increases were meanwhile reported as firms sought to pass an unprecedented rise in costs on to customers.

While job creation accelerated to the joint-highest in 21 years as firms boosted capacity to meet demand, optimism about the outlook was hit by supply concerns linked to the pandemic in manufacturing in particular.

The headline IHS Markit Eurozone Composite PMI® fell for a third successive month in October, according to the 'flash' reading*, dropping from 56.2 in September to 54.3. The decline indicates a further cooling of the rate of expansion from July's 15-year high.

Although the October expansion was the weakest since April, the latest reading remains above the survey's pre-pandemic long run average of 53.0 to signal above-trend growth of approximately 0.5% q/q. 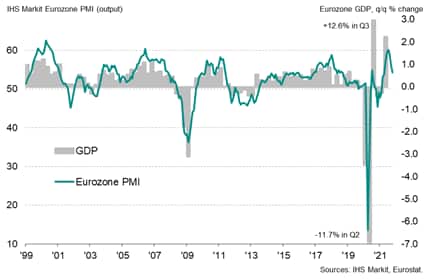 Growth slowed especially sharply in Germany, down to the lowest since February, and slipped to the weakest since April in France. The rest of the region as a whole also recorded the slowest expansion since April. 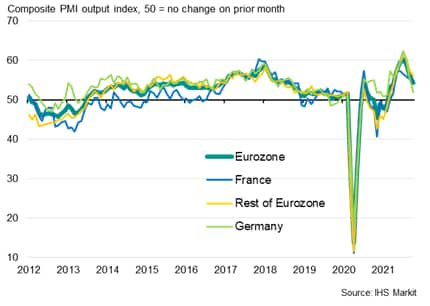 By sector, services outperformed manufacturing output for a second month running, the factory sector having now reported a slowdown in growth for a fourth straight month to register the weakest increase in production seen over the past 16 months.

Similarly, while growth of new orders edged higher in services, a slower rate of demand growth was seen in manufacturing. Measured overall, the resulting rise in new orders recorded during October was the slowest since April. 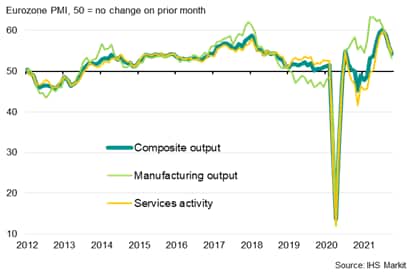 Weakened factory output growth - led by a renewed decline in France and near-stalling of production in Germany - was commonly attributed to supply constraints. Suppliers' delivery times lengthened to an extent exceeded over more than two decades of survey history only by that seen back in May, as supply shortages and transportation problems continued to worsen.

The autos and parts sector reported the worst performance, with output falling sharply again in October and at an increased rate.

While the service sector saw more robust growth than manufacturing, its rate of expansion cooled for a third month running to reach the lowest since April. Markedly weaker services growth in Germany contrasted with a slight uptick in France, though the rest of the region also saw a moderating expansion.

While some of the slowdown in services reflected a waning of the summer rebound from the fall in activity seen at the start of the year, especially weak service sector performances were recorded for travel, tourism and recreation, reflecting concerns regarding COVID-19. Conversely, strong growth was seen for healthcare, as well as media, banking and non-banking financial services.

Backlogs of work meanwhile continued to rise at an elevated pace. Although the rate of increase moderated to the lowest since April, the survey once again signalled that capacity was stretched both in manufacturing and services, with the former once again reporting an especially marked increase in uncompleted work.

Hiring was stepped up as firms sought to clear backlogs, resulting in a jobs gain that matched July's two-decade high. Jobs growth accelerated in both Germany and France, and notably was one of the fastest in 21 years in the rest of the region.

By sector, jobs growth edged up in both manufacturing and services, the former running below recent peaks as material shortages obviated the need for extra workers in some cases, though the latter saw the largest gain since 2007.

Shortages were meanwhile once again seen as the key driver of higher prices for many goods and services in October, leading to a survey record increase in firms' input costs. An unprecedented input cost increase was recorded in manufacturing while service sector costs rose at the sharpest rate since September 2000. 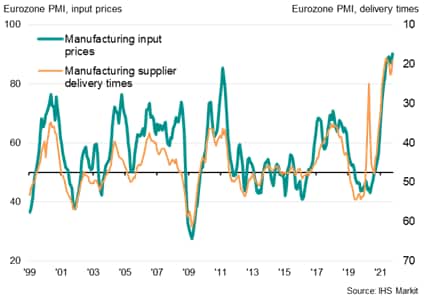 Selling price inflation likewise accelerated as firms passed higher costs on to customers, reaching the fastest in almost two decades of comparable survey history both in manufacturing and services. 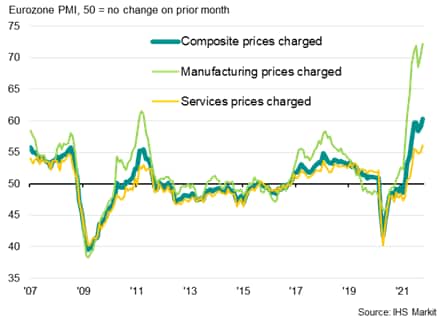 Looking ahead, future sentiment moderated for a fourth consecutive month to the lowest since February. Although the outlook brightened slightly in services, optimism in manufacturing hit the lowest for a year, largely due to concerns over the lingering impact of the pandemic on supply chains and prices.

The ongoing pandemic means supply chain delays remain a major concern, constraining production and driving prices ever higher, both in manufacturing and in the services sector, which will inevitably feed through to higher consumer prices in the coming months. 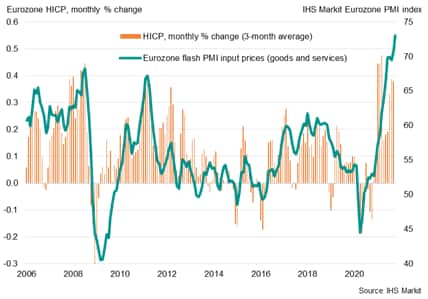 While the overall rate of economic growth remains above the long-run average for now, risks seem tilted to the downside for the near-term as the pandemic continues to disrupt economies and push prices higher. After strong second and third quarter expansions, GDP growth is looking much weaker by comparison in the fourth quarter.

Thus, with the ECB having decided to slow the pace of its asset purchases under the pandemic emergency purchase programme (PEPP), the latest PMI data suggest that there is a clear risk that this 'taper' or 'recalibration' may once again prove an ill-timed policy move from the central bank. While admittedly only a minor adjustment to the policy stance, the tweak is a reminder of how the ECB arguably tends to place too much emphasis on price data and insufficient attention on output, with the latter likely to be the main factor determining longer term inflationary trends. 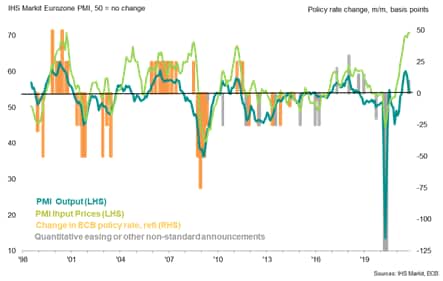 * The flash estimate is typically based on approximately 85% of the final number of replies received each month, covering all countries included in the final PMI readings. However, only national data for France and Germany are published.