Just one day after the European Central Bank announced an end to its quantitative easing programme, the latest flash PMI survey data indicated the slowest rate of Eurozone business growth for over four years, highlighting increased downside risks the economy.

The headline IHS Markit Eurozone Composite PMI® fell from 52.7 in November to 51.3 in December, its lowest since November 2014, according to the flash reading (which is based on approximately 85% of usual monthly replies).

The survey indicated only very modest output growth, in turn, reflecting a near-stalling of growth in new work. This reduced inflow of new business meant firms often resort to eating into backorders to support current activity, causing backlogs of work to fall for the first time in almost three years. Output and jobs growth could therefore weaken further in coming months unless demand revives quickly. Hiring has in fact already come under pressure as the weakening order book situation often prompted greater caution in taking on new staff in December. The latest monthly job gain was the smallest for two years.

Comparisons with official data suggest that GDP growth in the fourth quarter as a whole is indicated at close to 0.3%, but the surveys point to quarterly GDP growth momentum slipping closer to 0.1% in December alone. 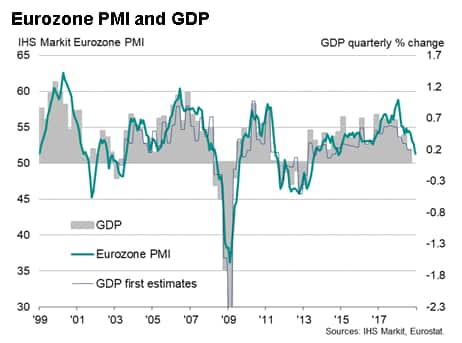 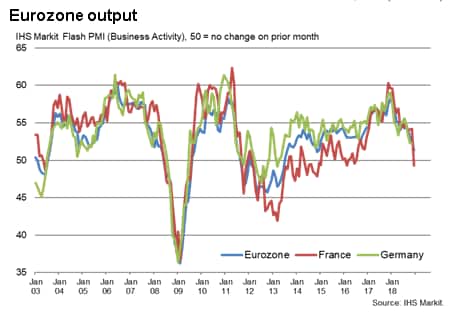 While some of the slowdown reflected disruptions to business and travel arising from the 'yellow vest' protests in France - where business activity fell for the first time in two-and-a-half years - the weaker picture reflects growing evidence that the underlying rate of economic growth has slowed across the euro area as a whole.

In Germany, output grew at the slowest rate for four years, while elsewhere the rate of output growth deteriorated to the weakest for just over five years.

The survey's anecdotal evidence reveals that companies are worried about the global economic and political climate, with trade wars and Brexit adding to increased political tensions within the euro area. The surveys also point to further signs that the struggling autos sector continued to act as a drag on growth. 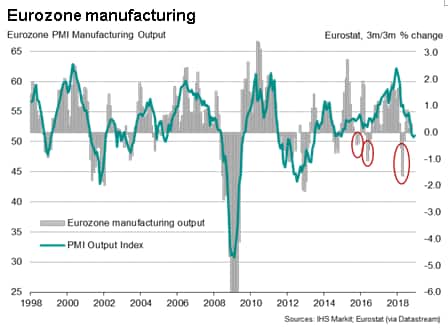 As such, the survey data suggest that the official production data could slip into decline as move into 2019. Unlike the last three downturns signalled by Eurostat, the current downturn could prove more protracted (see chart).

Growth meanwhile slowed sharply in the service sector to the weakest since November 2014, albeit remaining slightly above that of manufacturing. Service sector new business and future expectations also slipped to four-year lows. 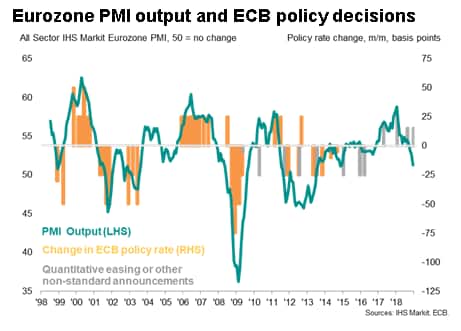 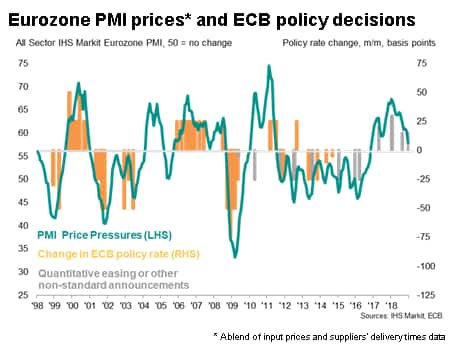 The survey also brought signs that reduced oil prices are feeding through to lower inflation. Cost pressures remained elevated overall, but eased to the weakest since September 2017. Cost growth was alleviated by lower oil and other commodity prices, as well as fewer supply constraints relative to demand in much of the region (the incidence of supply chain delays was the lowest for two years), France being a notable exception.

Output price inflation also cooled to the lowest since September of last year, though remained far stronger in Germany than in France or the rest of the region as a whole.

The disappointing survey data came just one day after the ECB announced it would halt its asset purchases, currently running at €15 billion per month, in December. The economic slowdown has clearly come at a difficult time for the bank, which earlier in the year had clearly laid out its strategy of reining-in its stimulus.

ECB head Mario Draghi has at least now acknowledged that the balance of risks to growth has moved to the downside, and downgraded growth projections for both 2018 and 2019, albeit still expecting to see a 1.7% expansion in 2019 after 1.9% growth in 2018. Such a view may soon seem optimistic unless the data pull higher at the start of 2019. IHS Markit is currently forecasting GDP growth of just 1.4% in 2019.