Eurozone factories report slower progress in climb out of lockdowns

The Eurozone's manufacturing upturn is showing signs of losing momentum after the initial rebound from COVID-19 lockdowns, with rising infection rates posing a further threat to recovery prospects in coming months. With factory output still almost 8% lower than its pre-pandemic peak, a full recovery of output still looks some way off for the region as a whole.

Climb out of lockdown slows

Eurozone manufacturing output rose 4.7% m/m in July, according to the latest official statistics from Eurostat, building on prior expansions seen in both May and June. The recent gains have pushed output in the latest three months 0.9% higher than the prior three months, representing the first increase on this measure since April 2019. The July level of production was also some 16.1% above the average seen in the second quarter, underscoring the likelihood of the third quarter registering a strong rebound from the 17% collapse in production which took place during the second quarter. 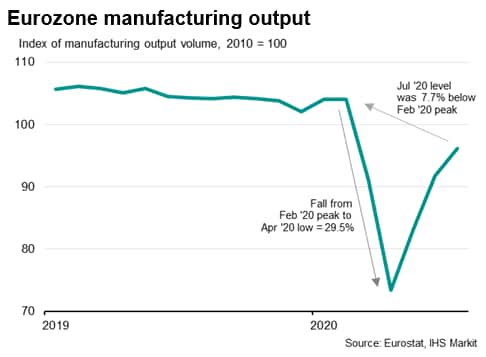 However, despite the recent gains, production remains some 7.7% below the pre-pandemic peak seen in February, and 7.9% below the level of a year ago. Moreover, the 4.7% gain seen in July was far weaker than the 13.4% and 10.3% gains seen in May and June respectively.

Insights into whether the recovery is losing momentum can be gleaned from the PMI data, which hint that the recovery remained robust into August but has lost strength from the initial rebound.

The main gauge we use for tracking Eurostat manufacturing output is the output index from the IHS Markit Eurozone PMI survey. Since its inception in 1998, this survey gauge has exhibited a correlation of 79% against the three-month-on-three-month rate of change in the official data with a lead on one month. With the PMI also published more than six weeks faster than comparable official data, the PMI therefore acts as a leading indicator with signals being sent more than two months in advance. 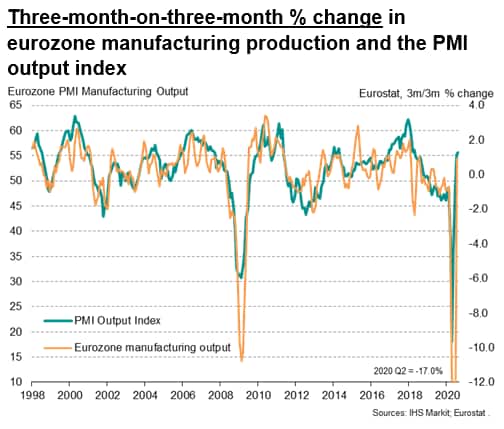 Historical comparisons indicate that, at 55.7 in August, the latest PMI output index is broadly indicative of output rising at a quarterly rate of 1.0%, which is only modestly higher than the 0.9% gain (correctly) indicated in advance for July. Note that the index gained merely 0.4 index points in August, signalling only a very marginal acceleration in growth.

The PMI has sent a more useful advance indication of production trends than surveys based on sentiment, such as those conducted by the European Commission. This is most likely because the PMI collects data on actualchanges in business metrics such as output, orders, prices and employment rather than subjective opinion on whether, for example, business conditions have become more or less favourable, or if firms have become more or less optimistic, or if order books are satisfactory or not. Such subjective measures may be influenced by news flow and often carry an inherent lag. Hard data such as inflows of new orders will, for example, change sooner than sentiment based on whether a company feels its order book situation is satisfactory.

The European Commission's manufacturing sentiment index, for example, exhibits its highest correlation of 68% against the official gauge of manufacturing output (measured on a three-month-on-three month basis) with a lag of one month, which is far lower than the PMI's 79% correlation that is achieved with a one-month lead. 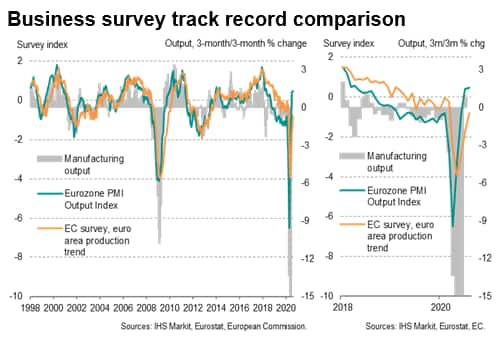 With the initial rebound from the height of the pandemic having now taken place, further gains in production in coming months are likely to be modest and to a large extent dependent on the path of the pandemic. Renewed rise in infection numbers in several eurozone countries during August meant lockdown measures were barely changed on average compared to July, according to IHS Markit's COVID-19 Containment Index. This gauge, based on a basket of lockdown measures such as non-essential business closures, transport and mobility restrictions etc, eased just one point in August. A further seven-point decline is anticipated for September, based on government-published guidelines for the further opening up of the region's economies, but - as our chart comparing the PMI output index with COVID-19 containment measures implies - any reversal of the lockdown easing will risk dampening the manufacturing recovery. 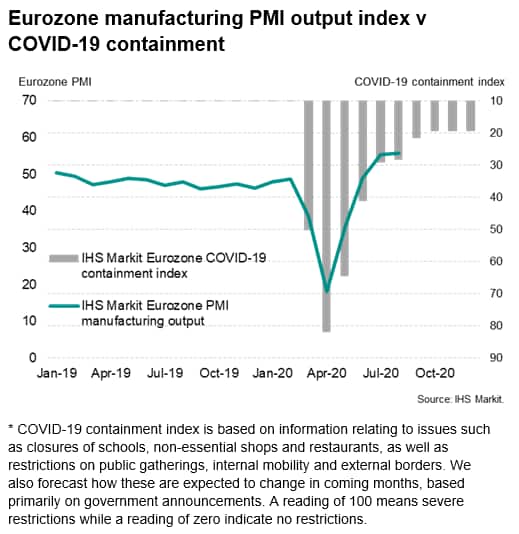 Further concerns about the sustainability of the recovery are raised by some of the PMI's sub-indices. Although new order inflows continued to rise in August, the rate of increase slowed. Inventories and employment also continued to fall as companies remained heavily focused on cost cutting.

Whether the upturn loses momentum in September will be indicated by the flash PMI data, published on 23rd September.