Demand for goods and services is surging at the sharpest rate for nearly 15 years across the eurozone, according to flash PMI data form IHS Markit, as the region continues to reopen from covid-related restrictions. However, companies are struggling to meet demand to a degree not seen for 23 years. While this bodes well for the recovery to gain momentum in coming months, this imbalance of supply and demand is also driving prices higher at a rate not seen since at least 2002.

The headline IHS Markit Eurozone Composite PMI® rose from 53.8 in April to 56.9 in May, according to the preliminary 'flash' reading, the survey's new orders index rose even more sharply to 58.4. You have to go back to June 2006 until you find faster growth of new orders.

The data therefore point to a sharp acceleration of GDP growth in the eurozone during the second quarter. 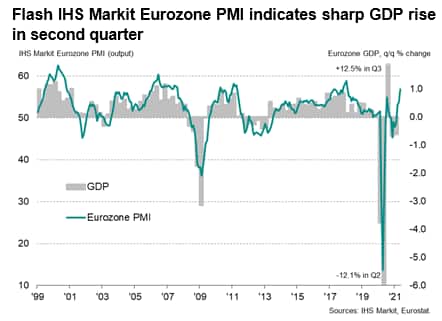 The improvements come as virus containment measures have been eased in May to the lowest since last October, according to IHS Markit's calculations, which has facilitated an especially marked improvement in service sector business activity. Having eked out a marginal increase in April for the first time in eight months, the region's service sector expanded in May at a rate not seen since June 2018.

It was manufacturing that continued to lead the recovery, however, with factories reporting yet another near-record expansion of production. 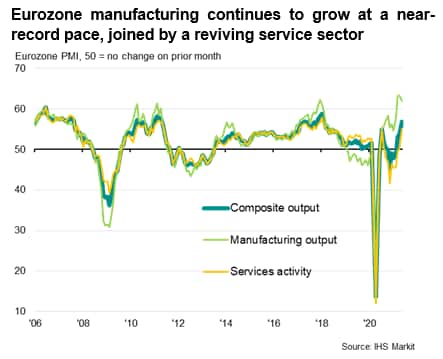 It's worth noting that growth would have been even stronger had it not been for record supply chain delays and difficulties restarting businesses quickly enough to meet demand, especially in terms of re-hiring.

The May survey data indicate that the overall shortfall of business output relative to demand is running at the highest in the survey's 23-year history. Backlogs of uncompleted orders consequently rose to a degree not surpassed since that series began in November 2002.

Meanwhile, although the rate of job creation remained the second-highest in just under two years, it waned slightly due to instances of difficulties in filling job vacancies. 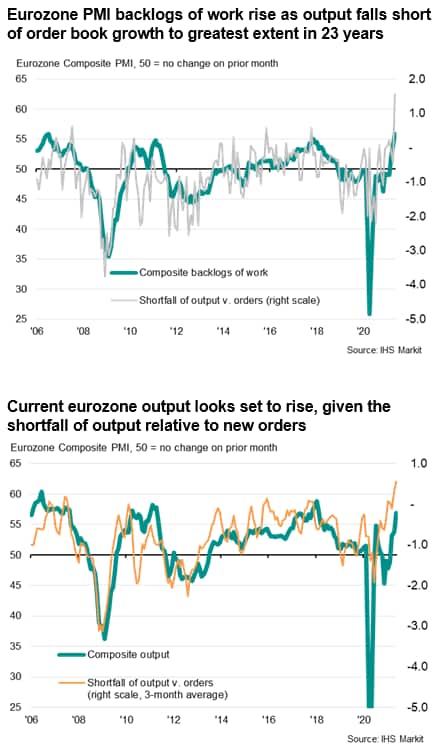 While the shortfall of production relative to new orders points to faster output growth across the manufacturing and service sectors in coming months, this imbalance of supply and demand has put further upward pressure on prices.

Average input prices rose in May at the sharpest rate since March 2011, led by the largest rise in factory input costs recorded since survey data were first available 24 years ago. Service sector costs also grew at an increased rate, registering the sharpest rise since November 2018.

Average prices charged for goods and services meanwhile rose at the fastest pace since comparable data were first available in 2002, fueled by a survey-record increase in factory gate prices. Prices charged for services rose modestly by comparison, through showed the biggest increase for just over two years.

How long these inflationary pressures persist will depend on how quickly supply comes back into line with demand, but for now the imbalance is deteriorating, hinting strongly that consumer price inflation has further to rise. 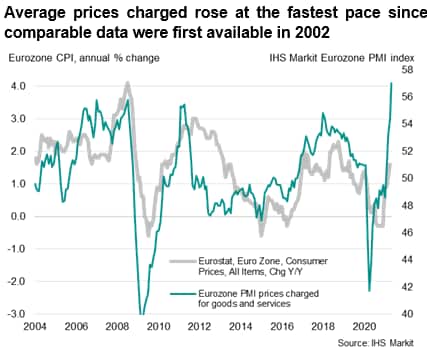