The eurozone's economic recovery ground almost to a halt in September, as a renewed fall in service sector activity countered faster manufacturing growth.

The IHS Markit Composite PMI output index, a GDP-weighted average of the manufacturing and service sector survey gauges, fell from 51.9 in August to 50.4, signalling only a mild increase in business activity.

While the survey continues to indicate that the economy rebounded strongly over the third quarter as a whole, thanks to a strong surge at the start of the quarter (after business activity contracted sharply during the height of the Covid-19 pandemic in the second quarter), the rebound lost almost all of its momentum as the third quarter progressed. As such, the survey indicates an increased risk of the economy sliding back into contraction in the fourth quarter. 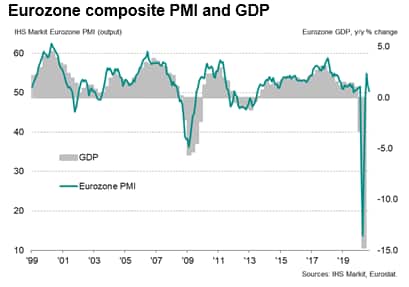 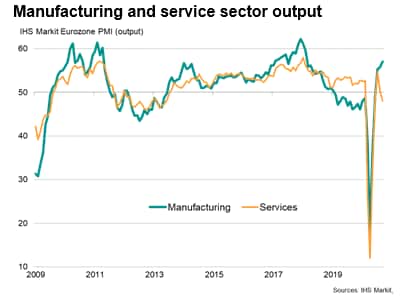 A downturn in service sector activity during September was widely blamed on a second wave of virus infection rates in many countries, with social distancing restrictions curbing recreation, leisure, travel and tourism activities in particular.

Furthermore, due to the relatively large size of service sectors compared to manufacturing, the weakening of the former exerted a marked toll on overall business activity. Output in France, Spain and Ireland consequently contracted in September, and remained broadly stagnant in Italy. Of the four largest eurozone member states, only Germany saw a robust overall expansion of activity, with growth the second-quickest for two years, behind only that seen in July, thanks to a strong surge in manufacturing production. 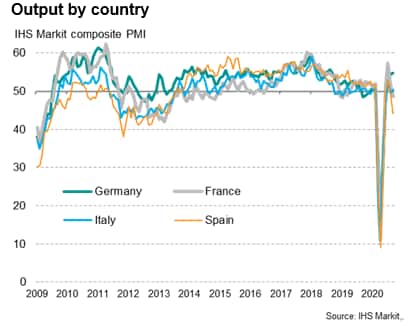 Survey respondents commonly cited Covid-19 as a key cause of worsening service sector growth. Virus containment measures remained particularly strict in both Spain and Italy during September, and were also tightened in France and Germany, according to the IHS Markit Covid-19 Containment Indices. These gauges track a basket of virus-related restrictions in each country to provide an internationally comparable dataset to compare how economies are likely to be affected by Covid-19. The gauges are also forecast to the end of 2020 based on government disclosures on their planned restriction in coming months.

According to current roadmaps for opening up economies, virus related restrictions are set to remain at current levels on average for the rest of the year, which will inevitably subdue business activity at many consumer-facing service providers. Any further escalation of virus infection numbers will of course likely also result in tighter restrictions, curbing growth further. 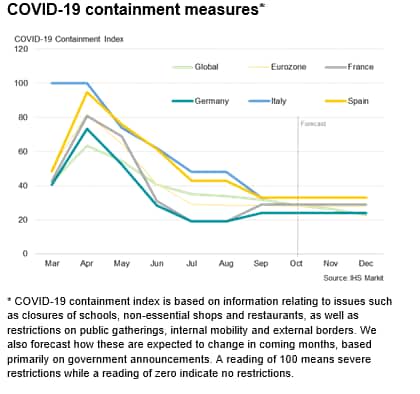 Much will depend on whether second waves of virus infections can be controlled, and whether social distancing restrictions can therefore be loosened to allow service sector activity to pick up again.

Governments will also need to be vigilant in providing timely support to sustain recoveries, alongside increasingly accommodative monetary policy. In terms of the latter, inflationary pressures remained low in September, keeping the door open for loose policy. Average prices charged for goods and services fell for a seventh straight month in September, according to the PMI survey, with the rate of deflation gathering pace again after easing in the prior four months. Expectations have risen for more asset purchases to be sanctioned by the ECB's governing council by the end of the year, and any further deterioration of the PMI numbers as we head into the fourth quarter will add further weight to calls for more stimulus. 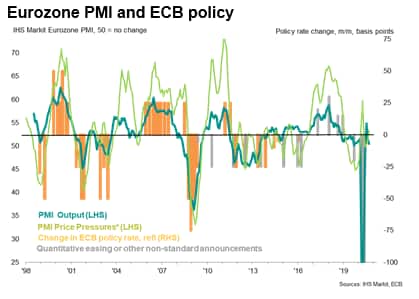