Service sector companies across the eurozone saw growth of business activity grind almost to a halt in August, fueling worries that the post-lockdown rebound has started to fade amid ongoing social distancing restrictions linked to COVID-19.

The services PMI business activity index - which is the sector's equivalent of the output index for manufacturing industry - fell to just 50.5 in August, only slightly above the 50.0 no change level. 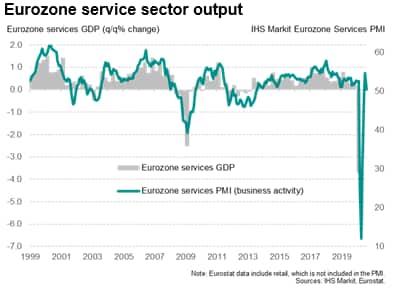 The near-stalling needs to be viewed in the context of the strong expansion seen in July, where the business activity index had surged to a near two-year high of 54.7 as economies opened up further from severe lockdowns designed to contain the COVID-19 virus. However, the latest reading still sends a disappointing signal that the rebound has lost almost all momentum.

The larger size of the services economy means the subdued picture offsets the more upbeat survey of manufacturers in August, suggesting that the overall pace of economic growth has waned midway through the third quarter. The composite PMI, which weights together the output indices from manufacturing and services, fell from 54.9 in July to 51.9 in August, despite the manufacturing output gauge edging up from 55.3 to 55.6. 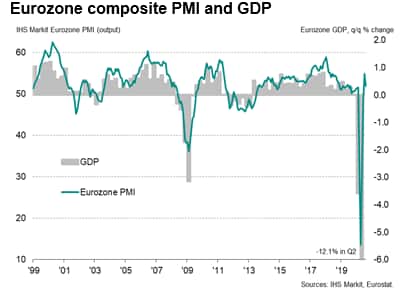 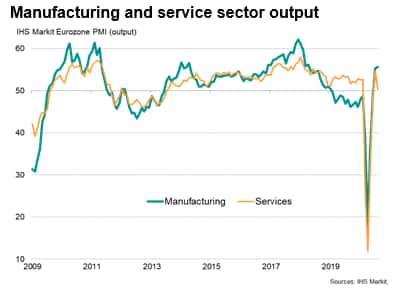 Performance weakened across all major single currency member states in August, both in terms of service sector and overall performance. Germany recorded the strongest services sector expansion in August, followed by France, though in both cases rates of expansion slowed markedly compared to July. Both Italy and Spain meanwhile reported renewed downturns of service sector activity after only relatively modest growth in prior months.

Where a reduction in activity was recorded, this was often linked to worries of resurgent COVID-19 infection rates, notably among consumer-facing companies and especially in Spain and Italy, where virus containment measures remained particularly strict. 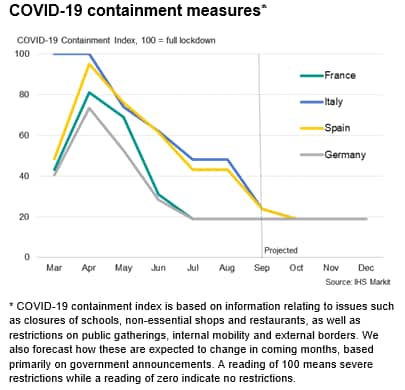 In contrast, manufacturing output rose in all four largest euro economies during August as factories continued to rebuild production capacity, led by the strongest surges in German and Italian production for 30 months. Although growth of factory production weakened in France and Spain, the overall rise in eurozone manufacturing production was the largest since April 2018. 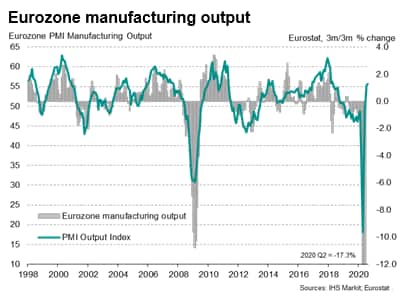 Measured across both manufacturing and services, Germany led the expansion by a substantial margin, followed by France, with Italy and Spain back in contraction territory. 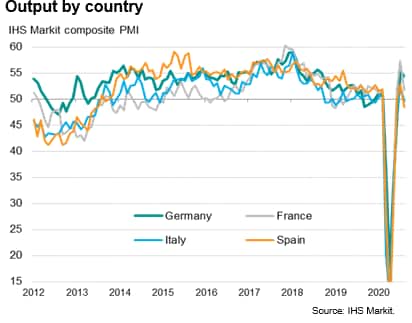 Although the relative strength of the PMI data in July and August mean the autumn is likely to still see the economy rebound strongly from the collapse witnessed in the spring, the August survey highlights how policymakers will need to remain focused firmly on sustaining the recovery as we head further into the year.

Further weakness could be on the cards in coming months. Inflows of new orders received by manufacturers rose at reduced rates in August, whilst new business at services firms fell slightly, and there are indications that firms are bracing for a renewed weakening demand in the near-term. In particular, an overriding theme of the August survey is one of firms taking a cautious approach to costs and spending, notably in respect to investment and hiring. Producers of investment goods such as plant and machinery reported especially weak order book growth, and overall? job losses remained more prevalent than at any time since the region's debt crisis in 2013, despite widespread government initiatives for companies to retain workers, amid continued worries about the strength of future demand and uncertainty over the course of the pandemic. 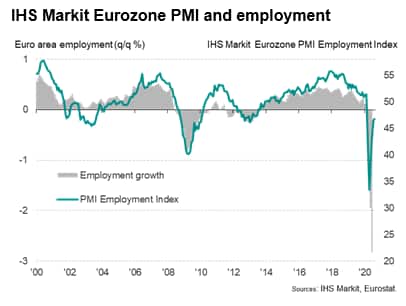 Job losses remained especially severe in the manufacturing sector where the rate of job cutting eased from the recent pandemic-related highs but remained quicker than at any time since 2009.

A far more modest rate of employment decline was seen in the service sector, though even here the scale of job losses remained higher than at any time seen over the seven years prior to the pandemic.

Key determinants of whether the recovery can be sustained, or whether we will see the economy "bounce and fade", will be the future path of the virus and the policy response.

Based on current government notifications, the degree of economic containment to prevent the spread of COVID-19 should ease further in September and then more moderately so in October. The IHS Markit COVID-19 Containment index for the region - for which a reading of 100 indicates severe restrictions while a reading of zero indicates no restrictions - has fallen from a peak of 82 in April to 28 in August. Providing there are no further infection waves, the index is projected to fall to 21 in September and 19 in October, where it will remain for the rest of the year as certain social distancing initiatives will remain in place. This further easing of restrictions in the coming two months should help further revive economic activity, but the degree to which the lockdowns are being eased has moderated compared to earlier months in the opening up of the economies, meaning the stimulus will be less marked. Furthermore, there is a clear danger that containment measures could be reintroduced if infection rates and deaths rise again. 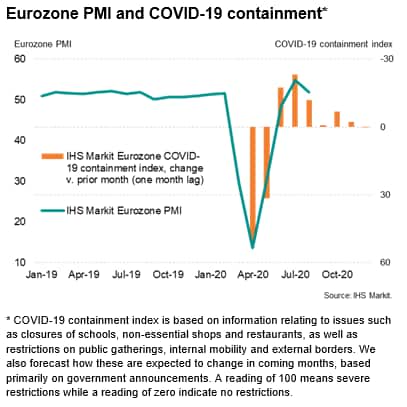 Fiscal policy is therefore expected to continue to play a key role in sustaining recoveries alongside accommodative monetary policy. In terms of the latter, inflationary pressures remain low, keeping the door open for loose policy. Average prices charged for goods and services fell for a sixth straight month in August, according to the PMI numbers. Input cost inflation also remained historically low, albeit edging higher. These price pressure gauges will need to be watched closely in coming months, as the future path of inflation remains somewhat uncertain. 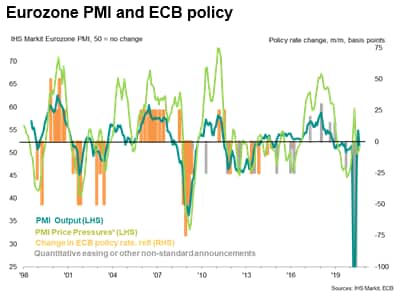 In summary, the third quarter should see GDP rebound sharply from the second quarter, but there are signs that the services sector has been hit by weakened demand from consumers in particular, and that manufacturing is being supported by a wave of pent up demand which could fade. Capacity across both sectors is hence being scaled back amid worries about the outlook. The next few months data will be all-important in assessing the sustainability of the upturn.