The Eurozone economic downturn deepened in September, with business activity contracting for a third consecutive month, according to preliminary survey data. Forward-looking indicators, such as new order inflows, backlogs of work and future output expectations, point to the decline gathering further momentum in coming months. At the same time, inflationary pressures picked up, fueled by rising energy costs.

The data therefore suggest that the challenge facing policymakers of taming inflation while avoiding a hard landing for the economy is becoming increasingly difficult. 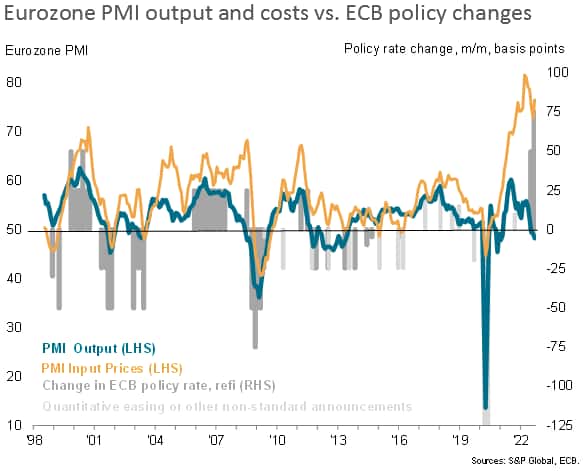 The S&P Global Eurozone PMI® fell from 48.9 in August to 48.2 in September, according to the preliminary 'flash' reading based on approximately 85% of usual survey responses. The reading was in line with economists' expectations.

The PMI has now registered below the neutral 50.0 level for three successive months, thereby signalling a continual economic decline throughout the third quarter, with the rate of contraction gathering pace in September to reach the fastest since January 2021. Excluding the pandemic shocks, the latest reading was the lowest since May 2013.

These early PMI readings indicate an economic contraction of 0.1% over the third quarter as a whole, with the rate of decline having accelerated through the three months to September to reach a comparable quarterly rate of -0.2%, setting the scene for a weak start to the fourth quarter. 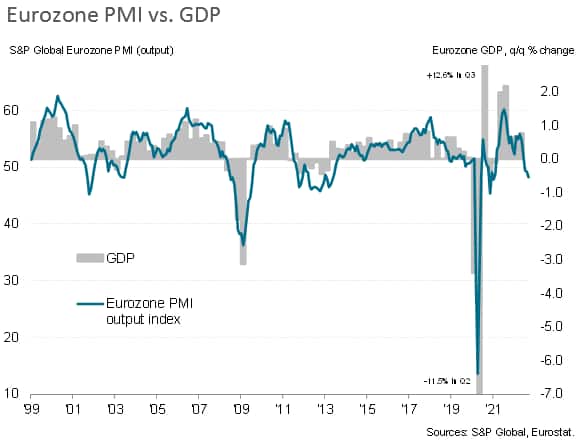 Manufacturing led the downturn, with factory output falling for a fourth straight month. Moreover, the rate of decline quickened slightly to the fastest since May 2020. At 48.5, the headline manufacturing PMI was slightly below expectations of a decline to 48.7.

Service sector output also fell, down for a second consecutive month, contracting at a rate not seen since February 2021. The sector's headline business activity index, at 48.9, was only slightly below consensus expectations of 49.0. The service sector decline was notable in being the sharpest since 2013 excluding the falls seen as a result of pandemic containment measures, led by steepening losses for travel, tourism, recreation, real estate and insurance. 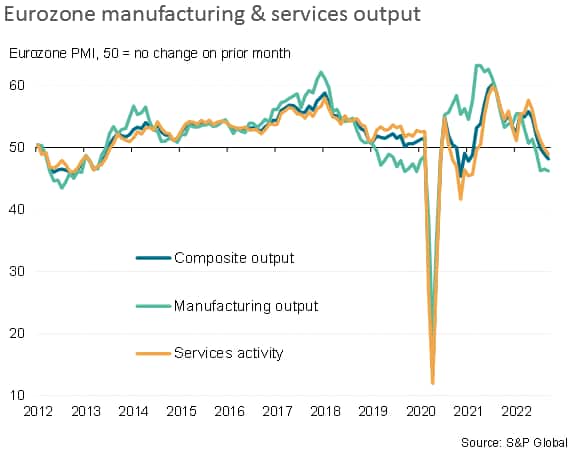 Germany is facing the toughest conditions, with the economy deteriorating at a rate not seen outside of the pandemic since the global financial crisis. Germany's composite PMI sank to 45.9, its lowest since May 2020 and, excluding the pandemic, its weakest since June 2009. 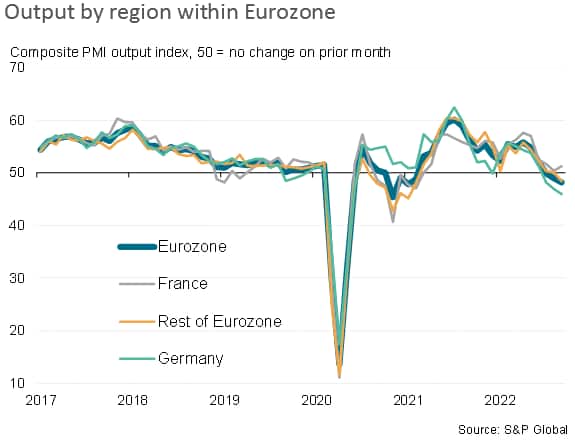 Besides the initial COVID-19 lockdown in early-2020, Germany's service sector decline was also the severest since June 2009. Manufacturing output continued to fall across Germany, albeit with the rate of decline moderating thanks in part to reduced supply chain constraints.

Output rose only modestly in France, the composite PMI registering 51.2 to beat expectations. Although the increase exceeded the near-stalling seen in August, the survey has indicated a marked slowing in French growth during the third quarter compared to the second quarter. An acceleration of service sector growth helped offset a deepening manufacturing downturn. French factories reported a drop in output which, barring the initial collapse during closures at the start of the pandemic, was the largest since March 2013.

Elsewhere across the region, output fell for the first time since February 2021, as a third successive monthly drop in manufacturing production was accompanied by the first fall in service sector activity since January.

New orders for goods and services meanwhile fell sharply for a third straight month, the rate of loss accelerating to a pace not seen since April 2013 barring periods of pandemic restrictions. Manufacturing orders fell especially severely, but service sector new business inflows also fell at an increased rate, in both cases declining faster than output to hint at a further acceleration of output losses in October.

Similarly, backlogs of uncompleted orders fell at a steepening rate, down for a third month in a row. An accelerated decline in manufacturing was joined by a renewed fall in services. Such declines point to excess capacity relative to demand growth. 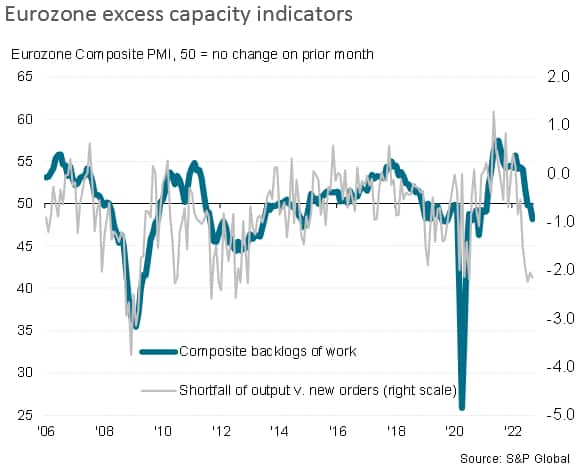 While employment growth was unchanged during the month, August's gain had been the lowest for 17 months. The recent cooling in the job market reflects increased caution in respect to hiring amid rising costs and growing economic uncertainty. 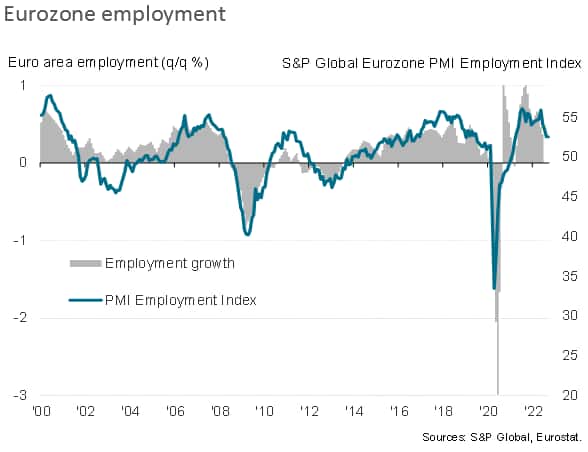 Although factory output was again constricted in many cases by component shortages, with some evidence of energy market developments also limiting production capabilities, supplier delivery times lengthened to the smallest extent since October 2020 amid reports of fewer component shortages and improved logistics and shipping in some sectors.

While easing raw material supply constraints helped alleviate some inflationary pressures, rising energy prices were widely blamed on a renewed acceleration of input cost inflation across both manufacturing and services. The overall increase in costs was the steepest since June. 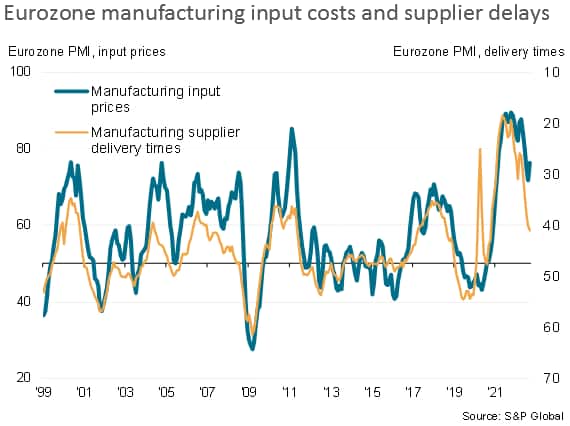 Higher cost pressures meant that, after four months of cooling, the rate of increase of prices charged for goods and services also accelerated to the sharpest since June as firms sought to protect margins.

Looking ahead, business expectations for the coming year slumped sharply lower, dropping to the weakest since May 2020 and, excluding the pandemic, the lowest since November 2012. 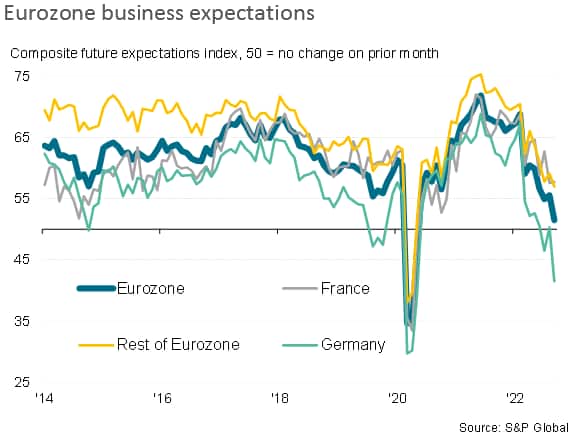 By far the steepest collapse in confidence was evident in Germany. In contrast, a slight improvement in future sentiment was recorded in France and a comparatively resilient mood was seen in the rest of the region as a whole, albeit in both cases down sharply from earlier in the year

The gloomy outlook principally reflected concerns over soaring energy prices and the detrimental impact of rising inflation on firms' costs and customer demand. Higher interest rates, the Ukraine war, and ongoing supply chain shortages were also widely cited, as was a further shift towards destocking in manufacturing, both among producers and their customers. Note that the survey's manufacturing new orders to inventory ratio, a key gauge of future production and an important bellwether of upcoming GDP data, has fallen to depths rarely seen before to hint strongly at worse to come in the months ahead. 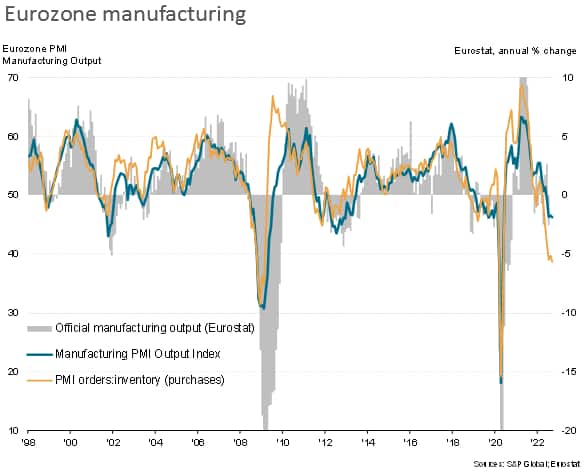