Eurozone consumer staving off recession but watch the oil price

The resilience of consumer spending in 2019 allowed the eurozone expansion to continue into a seventh year, despite the persistent drag from weakness in global trade and exports. Private consumption expanded by 0.5% q/q in Q3 2019, the fastest rate of increase for eight quarters. For Q4, the picture is incomplete at this point but the recent retail sales data for November delivered a positive surprise (Chart 1). Unchanged sales volumes in December would yield a q/q rise for Q4 2019 of 0.5% q/q, matching Q3's rate of increase, though down a little versus the average 0.7% q/q increase in H1.

The final eurozone services PMI for December also brought a little festive cheer, with the consumer demand-sensitive data revised upwards from the prior "flash" estimate. At 52.8, the headline business activity index is still comfortably in expansion territory, while the future activity index rose above 60 for the first time in five months.

Household real compensation growth fared pretty well during 2019, rising by around 2% overall (incorporating estimates for Q4 data yet to be released). In our baseline for 2020, we forecast a moderation to around 1½%, reflecting:

The latter assumption, however, is predicated on an average oil price in 2020 of around EUR57 per barrel. The recent upward pressure, if sustained, would be consistent with a rather higher rate of inflation (see below) which is very unlikely to be offset by a commensurate pick-up in compensation growth given the economic climate, implying a significant headwind to growth at a time of high vulnerability for the eurozone economy.

Eurozone inflation almost doubled in the most recent two months, from a low of 0.7% in October up to 1.3% based on December's "flash" estimate. The central bank's interpretation of the data will depend on what is driving the acceleration and with this in mind, differentiating between November and December's inflation developments is important. 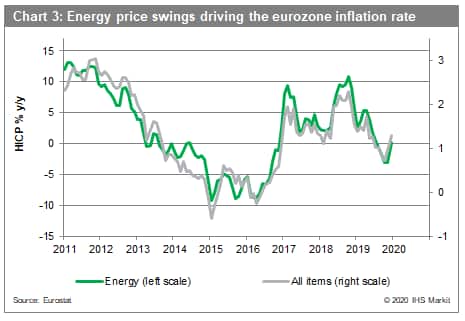 In both months, inflation accelerated by 0.3 percentage points but the factors driving the pick-up were very different. In November, higher services inflation was the primary reason. Methodological changes to the treatment of package holiday prices in Germany contributed to the pick-up, complicating an assessment of the data.

In December, however, the rise in inflation was due to energy prices. The y/y rate of energy inflation jumped back into positive territory (albeit only just), boosting inflation by 0.3 percentage points. The rise in oil prices during December was compounded by unfavourable base effects, with energy prices (worth almost 10% of the HICP) having fallen by over 3% m/m in December 2018.

At the time of writing, it looks like the energy-led pick up may continue in January, albeit marginally. Base effects will lean up, though to a lesser extent than in December, with energy prices having fallen by 0.9% m/m in January 2019. If crude oil prices in euro terms edge up to around EUR 60bn and remain broadly at that level through the remainder of January, the eurozone inflation rate would likely rise by another 0.1 percentage point in January, other things equal.

But what if it goes further, should US-Iran tensions intensify, disrupting oil supplies? By way of example, if crude prices were to average EUR70 per barrel this year - an increase of around 20% from current levels - the inflation rate would be half a percentage point above our current baseline forecast (even assuming no indirect effects beyond the direct impact on energy prices). With inflation near 2% in such a scenario, this would likely cut 2020's rate of real compensation growth in the eurozone by half relative to 2019, to around 1%.

Such a scenario would probably be enough to tip the eurozone into (mild) recession. The jump in headline inflation from October to December, and the prospect of another rise in January, will not concern the ECB from a price stability perspective. The acceleration comes from a very low level, inflation remains well below the ECB's "below but close to 2%" objective and the probability of second round effects on wages is low. The real worry would be the limited policy ammunition available should the economy head south.