Eurozone business growth at two-year high as flash PMI rises to 54.8 in July

Companies across the euro area reported an encouraging start to the third quarter, with output growing at the fastest rate for just over two years in July as lockdowns continued to ease and economies reopened. Demand also showed signs of reviving, helping curb the pace of job losses.

The data add to signs that the economy should see a strong rebound after the unprecedented collapse in the second quarter.

However, while the survey's output measures hint at an initial v-shaped recovery, other indicators such as backlogs of work and employment warn of downside risks to the outlook.

The flash IHS Markit Eurozone Composite PMI® rose further in July from the all-time low of 13.6 seen back in April, climbing from 48.5 in June to 54.8. This was the first reading above the 50.0 no-change level since February and indicated the largest monthly gain in output since June 2018. 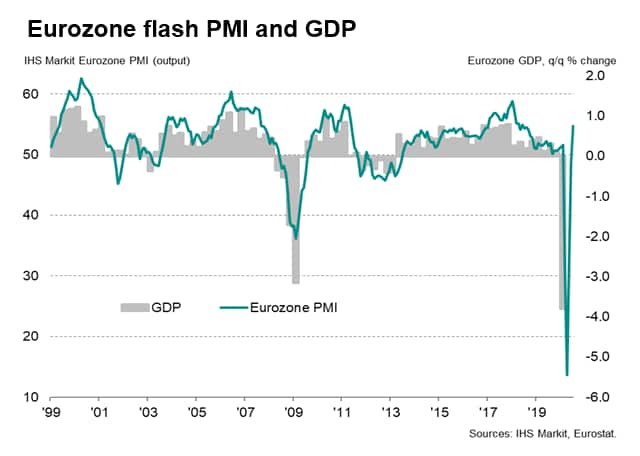 Both manufacturing and services returned to growth (the latter recording the slightly stronger performance), with growth hitting 23- and 25-month highs respectively. While the rise in service sector output was the first since February, the increase in factory production was the first reported since January 2019. 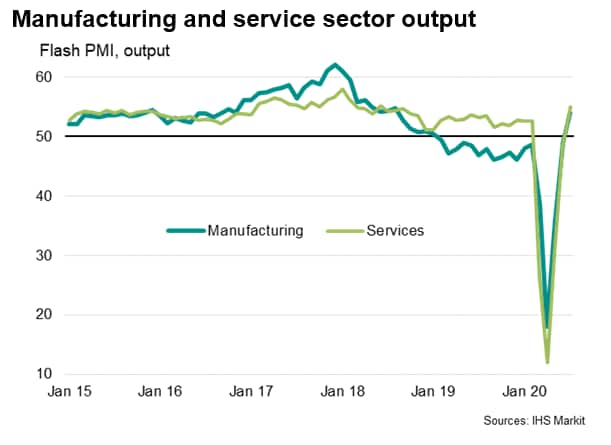 The improvement in part reflected a technical rebound from recent lockdowns, as businesses and their customers increasingly returned to work following the further relaxation of COVID-19 containment measures across the region during the month. 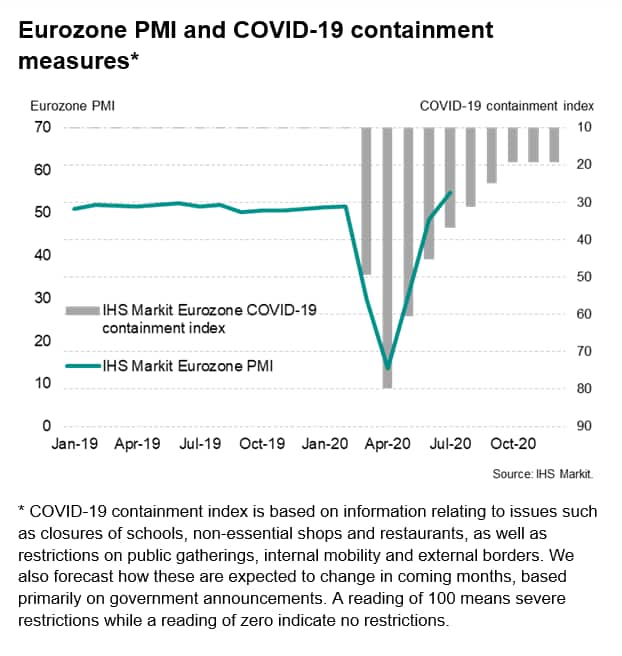 By country, French companies led the upturn, reporting a second successive month of output gains, with growth surging to the fastest since January 2018. Both manufacturing and services reported the best output growth for two-and-a-half years.

In Germany, output rose for the first time since February, increasing to an extent not seen for almost two years. A surge in services activity (the largest gain for two-and-a-half years) was accompanied by a more modest manufacturing output increase. The factory output gain was nonetheless the best seen for nearly two years, fueled by a marked jump in exports. 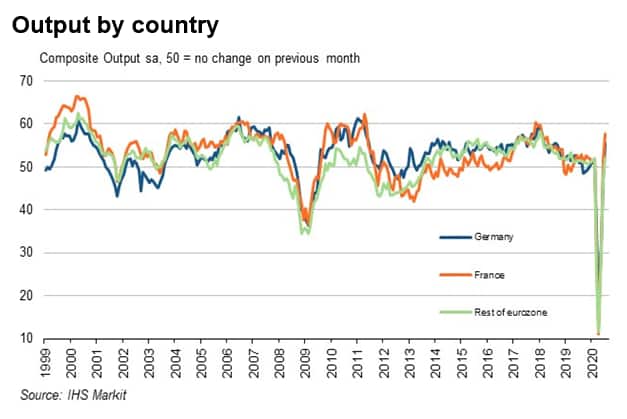 The concern is that the recovery could falter after this initial revival. Firms continued to reduce headcounts to a worrying degree, with many reporting that underlying demand is insufficient to sustain the recent improvement in output.

While demand was also reported to have revived alongside the lifting of lockdowns, with new order inflows rising for the first time since February, the upturn in new orders was less marked than that recorded for output, thanks in part to a further loss of export sales. This weakness of new business inflows led to an ongoing depletion of backlogs of work during the month, indicating a surfeit of capacity, hence the further trimming of headcounts during the month.

While the rate of job cutting eased compared to the prior four months, it nevertheless remained faster than at any time since the start of 2013. Job losses remained especially severe in the manufacturing sector where, besides the prior three months, the rate of job cutting was quicker than at any time since 2009. A far more modest rate of employment decline was seen in the service sector, though even here the drop in headcounts was the greatest for seven years, barring the height of the pandemic. 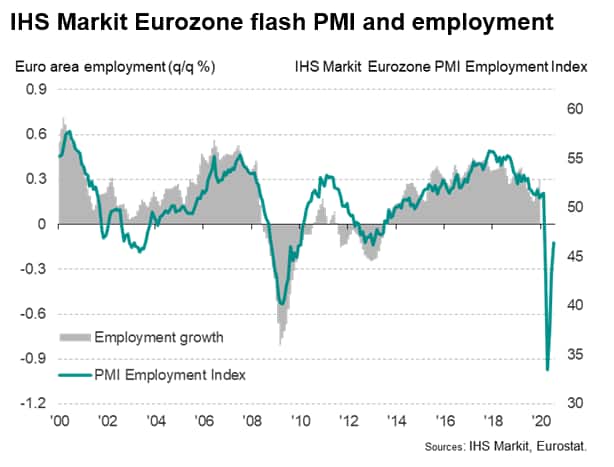 Demand therefore needs to continue to recover in coming months, but the fear is that increased unemployment and damaged balance sheets, plus the need for ongoing social distancing, are likely to hamper the recovery.

Looking ahead, expectations of future output continued to improve from the low plumbed in March, rising to five-month highs in both manufacturing and services, the latter reporting relatively greater prospects. Hopes of improved performance over the coming year often reflected expectations of a further opening up of economies, though companies also often warned that any gains were from historically low bases, due to business volumes having been hit hard by the pandemic.

Much will therefore rely on the pace at which economies can be re-opened further, virus numbers and stimulus measures.

In the absence of any second wave of the virus outbreak, the further planned reopening of economies in coming months should help sustain the recovery. In terms of stimulus, the recent agreement among EU member states on a COVID recovery fund represents an important development, with the willingness of member states to mutualise debt and disburse funding on the basis of grants rather than loans being two very significant steps.

Thus, while July's gains in the PMI represent an important initial step in the recovery, there remains a long way to go before the output lost to the pandemic is regained, and a renewed loss of momentum cannot be ruled out after the initial boost from businesses re-opening. Our forecasting team therefore expects the recovery to be long, with an 8.6% drop in GDP in 2020 followed by a more modest 4.2% expansion in 2021. 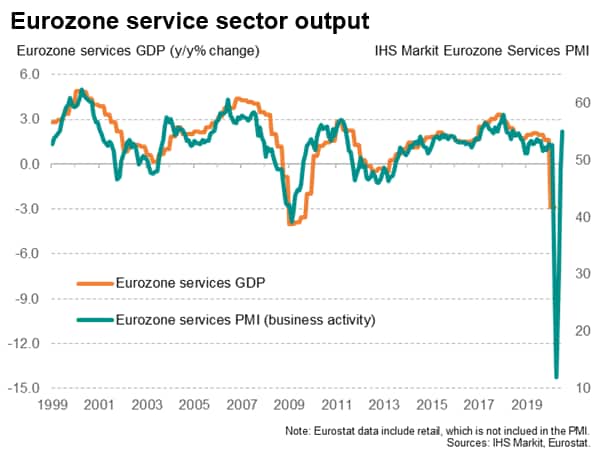 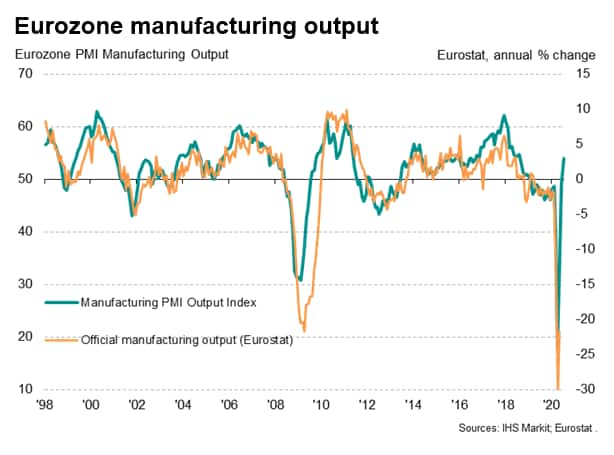 Fresh GDP estimates for major economies such as USA, Germany and France headline the economic calendar this week, a… https://t.co/VFt4blYkAA