The eurozone economy grew at its fastest rate in six months during February, according to flash PMI® data. The rate of expansion accelerated for a third straight month despite signs of demand being dampened and production being stymied by the coronavirus outbreak.

At 51.6 in February, the 'flash' IHS Markit Eurozone Composite PMI rose from 51.3 in January to indicate the largest monthly increase in business activity since last August.

Growth was centered on the services sector, where business grew at the joint-fastest rate seen over the past six months. Manufacturing meanwhile remained in decline, although the rate of contraction in output eased to the mildest seen over the past eight months.

The overall rate of expansion remained only modest, however, commensurate with GDP expanding at a quarterly rate of approximately 0.2%, largely due to further subdued new business growth. 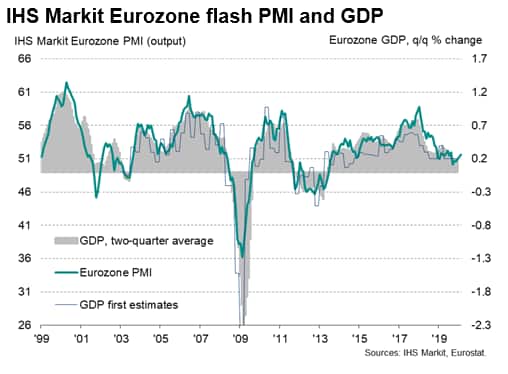 Although new orders rose at a rate equal to January's seven-month high, the rise was insufficient to prevent backlogs of work continuing to decline slightly, hinting at persistent excess capacity. Employment consequently continued to rise at a weaker pace than seen throughout most of last year, sustaining the softest spell of job creation seen for five years. 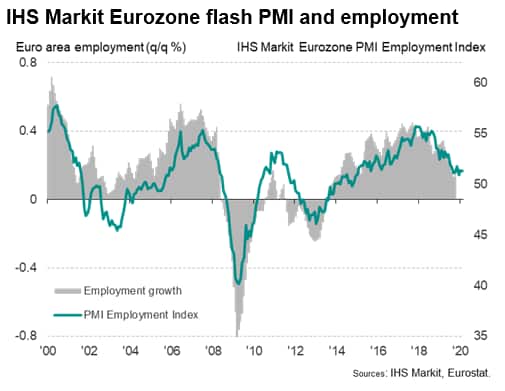 The improvement in the headline PMI suggests that eurozone businesses have, on balance, avoided an adverse impact from the coronavirus outbreak. However, there were signs that the epidemic has hit some sectors and could damage growth in coming months.

In the service sector, inflows of new business grew at a fractionally weaker rate than seen in the prior two months, the slowdown in part linked to travel, tourism and some areas of business reportedly being disrupted by the coronavirus outbreak.

New orders placed at manufacturers meanwhile fell for a seventeenth successive month, fuelled by an increased rate of decline in export* orders, notably to Asia. More encouragingly, the overall drop in factory orders was the smallest for 15 months as firming demand from domestic customers helped offset the export losses.

A further notable development constraining manufacturing in February was a marked lengthening of supplier delivery times, with delays for inputs the most widespread since December 2018, attributed in many cases to supply chain issues arising from the COVID-19 outbreak.

While the manufacturing orders-to-inventory ratio remained elevated by recent standards, hinting at the prospect of manufacturers stepping up production in coming months to ensure warehouse stocks are sufficient to meet demand, the widespread delivery delays seen in February suggest that actual production could be constrained unless new deliveries can be secured.

Hence, while the February survey data are welcome news in a month in which media headlines have been dominated by fears of economic growth being hit by the COVID-19 outbreak, the full immediate impact may not yet be apparent. 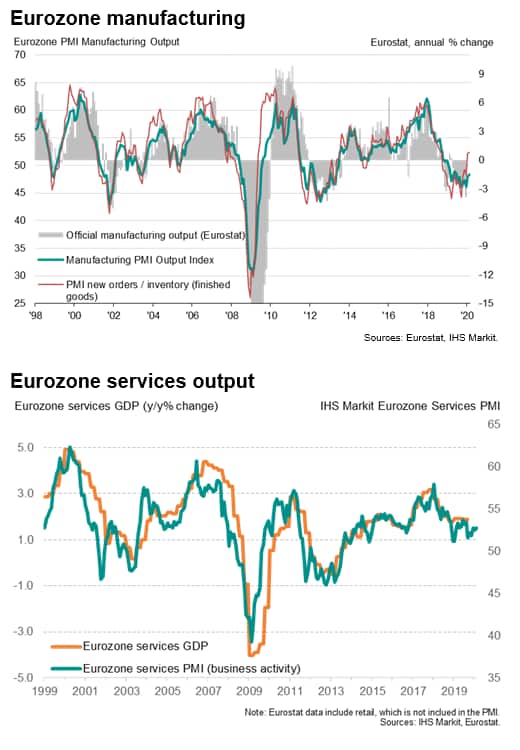 Looking into the breakdown of the flash PMI shows France outperforming Germany for the eighth time in the past nine months. The rest of the euro area saw growth reach the fastest since March of last year thanks to a sustained service sector expansion and the mildest contraction in manufacturing output recorded over the current nine-month downturn.

French private sector activity grew at a faster pace in February as a solid expansion in services more than offset an export-led decline in factory output. The export-led contraction in manufacturing production ended a four-month sequence of expansion, while services activity growth was the quickest since last October. 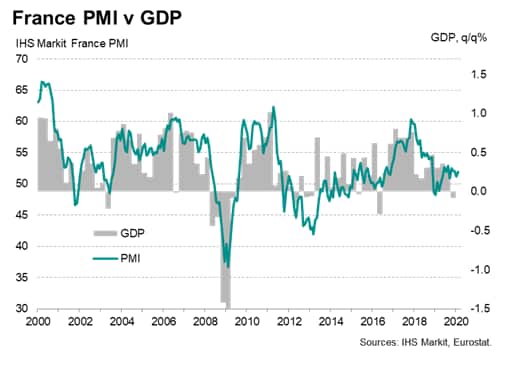 Germany saw output rise for a third successive month after three months of decline, but the rate of increase remained stubbornly weak to suggest the economy will struggle to expand to any significant degree. Notably, the manufacturing sector moved closer to stabilisation as orders showed the smallest decline in almost one-and-a-half years despite a slump in exports linked to the impact of the coronavirus.

Our colleagues in the European economic forecasting team expect eurozone GDP increase 0.9% this year, 1.0% in 2021, and 1.2% in 2022. On this basis, we assume no additional policy easing from the ECB in 2020, albeit with the current highly accommodative policy stance set to continue for a considerable period of time.

However, the next Governing Council meeting on 12th March is likely to see the ECB tweak its assessment of downside risks to the growth outlook to reflect the increased uncertainty stemming from the COVID-19 outbreak and restate, perhaps more forcibly, that it stands ready to adjust all of its policy instruments if necessary. The bottom line is that the ECB is going to want to have more time and information to gauge the significance of the COVID-19 outbreak and its consequences. It will therefore keep options open until it has a better grasp of the potential economic effects on the eurozone and their longevity. 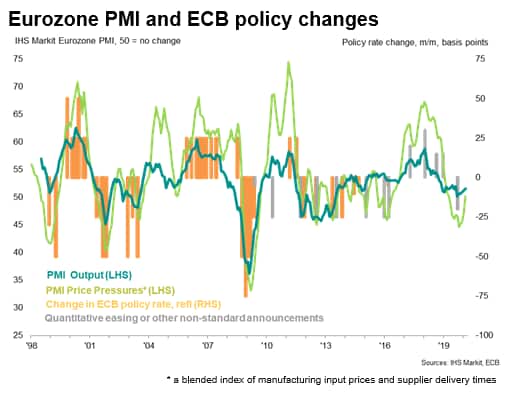