After several years of weak solar demand growth in Europe compared to the historical highs of 2011, installations are forecast to surge by 88% to reach a new installation record of 23 GWdc in 2019. A variety of favorable macro conditions have coalesced this year to reignite the market. These conditions include low module prices assisting the cost competitiveness of solar, return to growth of utility-scale driven by tenders and PPAs, steady growth of distributed PV (DPV) across the region driven by carefully managed policies and a broadening of the number of large solar markets in the region particularly in Eastern Europe.

While the European region is forecast to grow over the next five years, headwinds do exist. For example, grid connection issues, planning permission issues due to large installed base of PV in some local areas in key markets and shortening PPA terms as financial market drivers move towards merchant payment terms can cause delays. However, overall the European solar market is moving towards a new level of maturity and growth trajectory driven beyond rich subsidies. Increasingly, it will be driven by market fundamentals such as increasing interest from corporates, utilities and off-takers considering solar as a cost competitive energy generation source. 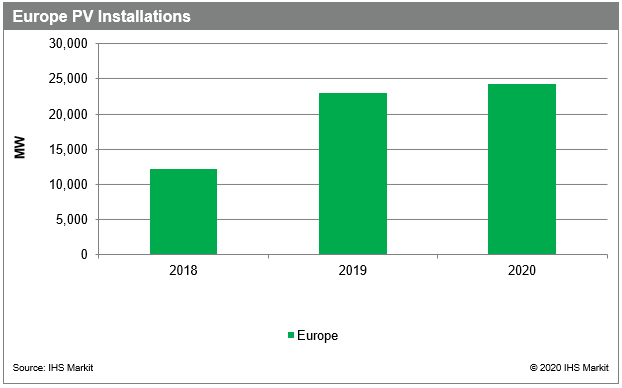 The global solar market in 2019 is highly interconnected and sensitive to big changes in demand such as the decline of a large market such as China. The solar supply chain has now reached such a scale that suppliers will seek new growth opportunities instantly if key markets fail to install expected demand for components. 2019 has been a prime example where the failure of China to reach the same heights as 2018 meant that module and inverter suppliers swiftly expanded internationally and rapidly lowered prices in order to fulfil their orderbooks. Among the beneficiaries are European EPCs and developers who were actively installing in 2019 during the lull in Chinese domestic demand in the first nine months of 2019. European installations are forecast to have surged to account for 18 percent of total global installations, an increase of six percentage points compared to 2018. Several Chinese module manufacturers are expected to increase capacity in the next few years with the mantra of scale being their strategy to maintain profitability and be cost competitive. As a result, PV system prices are expected to fall in 2020 mainly due to PV module prices decreases if excess module capacity develops which will help drive Europe to install more cost-competitive solar. 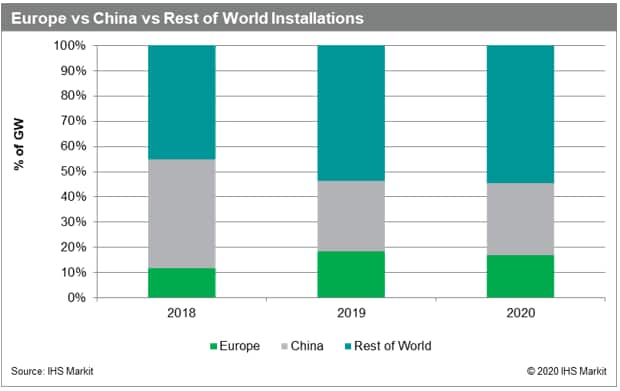 Figure 2: Europe vs China vs Rest of World Installations

2019 saw a large resurgence in solar demand across multiple markets in Europe after several years of modest growth according to its recent PV Installations Tracker: Fourth quarter 2019 (subscription required to access the report). While some of the major solar markets such as Germany, Spain, Italy, France and Netherlands that have been stalwarts of the European solar industry are expected to remain top-ten markets, growth markets such as Ukraine, Poland, Hungary, Turkey and Portugal are expected to flourish and to drive growth. Demand is forecast to be quite concentrated with the top-four PV markets of Germany, Spain, Ukraine and Netherlands, which at 13 GW of installations are forecast to account for almost 60 percent of European demand in 2019. 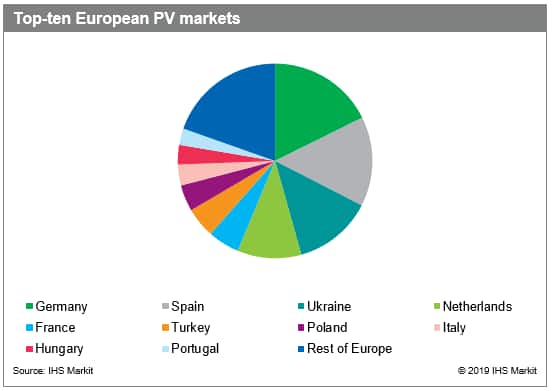 Is the European solar renaissance sustainable?

The European PV market, like other key solar markets, is not immune to the vagaries of changing market drivers and policies that can cause individual markets to boom or bust. PV installations in Europe have now reached a new level of critical mass with over 19 markets expected to have an installed base over 1 GW by the end of 2019 compared to a decade ago when only Germany, Italy and Spain had an installed base over 1 GW. The industry which has survived the initial market collapses is more resilient and educated as well as able to compete effectively with other energy generation forms such as coal. Solar is now in a new era of cost-competitiveness thanks to scale of the industry that produces well over 100 GW globally per year. In Europe, self-consumption is a major market driver, and merchant and/or PPAs are rapidly emerging as significant market segments. However, for the time being, tenders will be seen as necessary by many European governments to be able to push large-scale installations in a controlled way. New tenders have been announced this year in markets including Germany, France, Italy, Portugal, Poland, Hungary and the Ukraine. The development of the large-scale unsubsidized PV segment will crucially depend on the regulatory environment and the overall power market development in order to allow solar installations to prosper in Europe for the next five years.

Learn more about our solar and energy research and solutions.

Cormac Gilligan is a research and analysis manager at IHS Markit.