With an eye to the future, we analyzed the risk of protests and riots in Europe from mid-2021, when the coronavirus disease 2019 (COVID-19) virus epidemiological situation in Europe is likely to start improving. We assessed future trends for protests and riots, focusing on indicators for the changing risk environment. Let's take a look at the data for Europe first, and then take a close look at how this plays out across France.

Impact of the COVID-19 virus pandemic on protest trends

Our open source intelligence events collection indicates that despite an initial reduction in protests as a result of the imposition of government containment measures in March-April 2020, there was an uptick in protests and protest-related incidents for the remainder of 2020 and into 2021, back to pre-March 2020 levels.

You can see the geographical spread of protests and protest-related incidents recorded in our database in 2020-21 in our heatmap. The "warmer" the color, the higher the concentration of such incidents. The incidents heatmap demonstrates that throughout the pandemic, protests have remained quite evenly geographically spread, primarily across Western and Southern Europe. 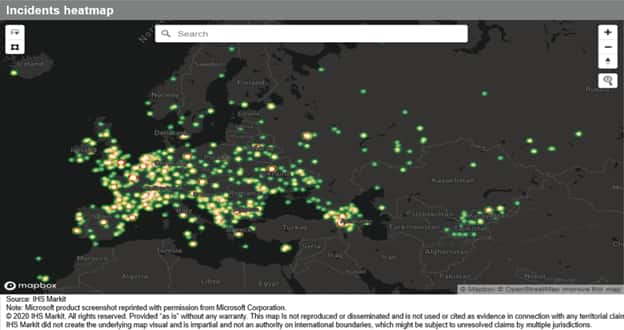 Taking this data forward, we can explore indicators even for unlikely scenarios, which are representative of the risk score bands for protests and riots as per our current methodology. 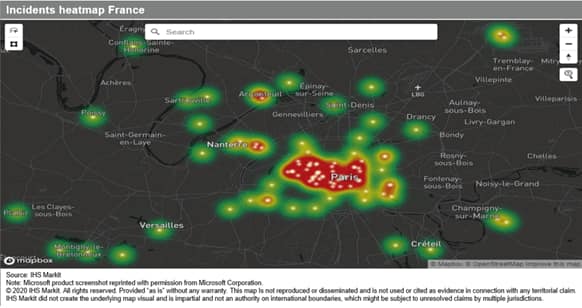 We currently assess France as being in the "very high" risk band for protests and riots causing damage to assets, business disruption, or injury in the one-year outlook. The "very high" band is characterized by very frequent, large-scale protests that disrupt business activity and/or transport networks in key cities for several days at a time and cause limited property damage in city centers.

Economic grievances, heightened by COVID-19-related containment measures, coupled with negative sentiment against President Emmanuel Macron (with a presidential election in April 2022) and environmental concerns will be the main drivers for civil disobedience in the coming months and even beyond the one-year outlook. Protests in Paris, Lyon, Bordeaux, Nantes, Toulouse, and Montpellier are likely to attract up to hundreds of thousands of participants. Violence will be primarily driven by demonstrators using "Black Bloc" tactics (including vandalism and rioting), as well as "anti-system", "anti-capitalist", and "anarchist" groups and supporters, who will attempt to take advantage of initially peaceful protests to escalate the potential for violence. This will involve fights with riot police and damage to government and commercial assets through vandalism and arson, including targeting high-profile multinational brands in retail and finance as well as extractive industries.

This level of risk is also defined by occasional large-scale violent protests or riots that lead to moderate damage to property in smaller cities or larger towns. In French suburban areas (banlieues), disenfranchised youths, due to increasing unemployment and decreasing living standards, spurred by perceived police brutality, may start rioting, including arson attacks, and vandalism, damaging public and private property.

In terms of the monetary value of potential damage, riots related to cuts in social spending in France in November 2005 were estimated to have caused EUR200-million (USD242-million)-worth of damage, and violent protests throughout late 2018 and early 2019 were estimated by the French Insurance Federation to have cost at least EUR170 million.

Indicators to watch: Likelihood of move into "severe" risk band

This band represents countries with tens of thousands of protesters in key cities staging protests and riots lasting up to a week. Protests often turn into riots with significant damage to property from thrown projectiles and arson, with high death and injury risk, especially from a heavy-handed security force response.