Our latest European Nowcasts give reason behind the Friday the 13th superstition, with the latest results showing a fright for economic prospects in the euro area. Our Q3 Nowcasts have been downgraded for Germany, France and Italy, indicating an increased likelihood of recession in the euro area's largest economy. While France looks set to maintain its outperformer status, albeit with a slower expansion than in the second quarter, stronger declines in GDP are forecast for Germany and Italy. Meanwhile, a positive flurry of data in the UK sees an upward revision to growth across the channel.

Technical recession risks have increased once again over in Germany thanks to another disappointing industrial production print for July, which our model has been pointing to for some time. However, the severity of July's decline was not fully captured and subsequently, the official outturn has led to a sharper contraction anticipated in the third quarter. Our Nowcast currently suggests Germany's economy has contracted by -0.28% (-0.21% previously).

The story is similar in Italy, where weak factory data has pushed the Q3 Nowcast into deeper negative territory (-0.08%, down from -0.04%). The outperformer continues to be France, which is being held aloft by resilience in the labour market. The plight of the regional manufacturing sector strikes once again, however, with a stronger-than-anticipated drop in industrial output contributing to a marked downward revision to +0.24% (+0.35% previously).

Nevertheless, the overall euro area projection was unchanged from last week at +0.05% as our model did a good job at anticipating the strength of July's drop in industrial production at the aggregated level this week.

The standalone upward revision was seen across the channel, with the UK third quarter nowcast improving to +0.10% (from +0.01%). The dataflow over the past week has been firmly positive, with growth in services and manufacturing during July flanked by strong wages figures. Official data for August will come in October, which will be crucial to weighing up any technical recession risk here, although we note that PMI data for August does not inspire a continuation of July's positive official data trend. 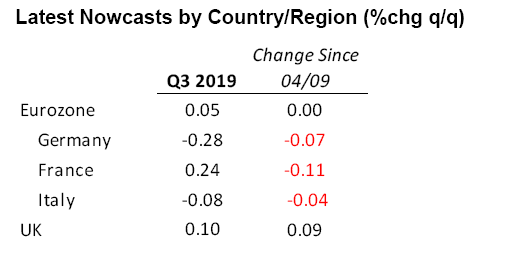