October's flash PMI data, released today, provide an early look at the performance of the euro area economy in the fourth quarter of the year - and as such our first nowcasts for the final three months of 2019.

Overall, the latest data offer a broad continuation of the trends we reported in the third quarter, with quarterly GDP growth remaining firm in France, but Germany continuing to struggle and, notably, raising the risk of an outright contraction of euro area GDP for the first time since Q1 2013.

The flash PMI for the euro area was little changed at 50.2 in October (September: 50.1) and subsequently remains around its lowest level since the first half of 2013.

The devil was, however, in the detail, with forward-looking data on new orders remaining in contraction territory and business confidence at its weakest since May 2013.

The PMI figures subsequently offer little reason to suggest any noticeable improvement in underlying regional performance prior to year-end, although we would caveat our first nowcast of a slight contraction in economic output (-0.1%). Naturally a paucity of information so far in the quarter elevates point estimate uncertainty, although this will subside in line with the newsflow over the coming weeks.

None more so is this the case than in Germany, where our first nowcast for Q4 2019 points to ongoing contraction (-0.25%) following our call for a decline in the third quarter of around -0.1%. As with the euro area, headline PMI data were little changed since September, remaining just inside negative territory for a second month running.

However, we again note that forward looking data (new business, confidence) were especially weak, whilst there was a first drop in private sector staffing levels for the first time since the summer of 2013 as the spillover from the industrial downturn into the domestic economy continues.

France, in stark contrast, is maintaining reasonably robust growth, with the early nowcast print coming in at +0.37%. Further evidence of ongoing domestic service sector growth was provided by PMI data, but there was also some expansion of the country's manufacturing base in October according to the early survey figures.

Finally, although we await Q4 related information on the performance of the UK and Italian economies, we nonetheless can provide early nowcast prints for both countries. In Italy we expect at this stage stagnation (-0.01%), whilst the UK is experiencing slight contraction (-0.06%), following expected growth of +0.18% in the previous quarter. 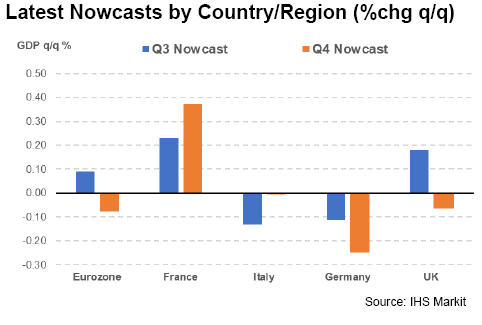