Our first growth estimates for the opening quarter of the new decade point to a continuation of meagre expansion across the European economy, although there are further signs that the recent downturn is bottoming out.

Of note, Germany looks set to record a stronger performance than in the fourth quarter, largely thanks to renewed strength in its more domestic-facing services economy. January PMI data showed activity rising at its best rate for five months, supported by firmer gains in new work and rising employment. However, with industrial recession persisting - the respective manufacturing PMI improved in January but remained well below the crucial 50.0 no-change mark - expect growth to remain weak at best and reflected by the initial Q1 2020 nowcast of 0.05% q/q expansion.

France meanwhile is maintaining expansion, with the headline PMI moving down only slightly in January. Growth is estimated to be running at a level of just below 0.4% q/q, a little slower than the previous quarter's punchy performance, but nonetheless on track for a robust gain.

Outside of the biggest two eurozone economies, we presently see Italy inside negative territory
(-0.1% q/q) although we await next week's January PMI data for a better steer on underlying economic performance at the start of the new year.

With Italy continuing to drag on regional output, and Germany only just inside growth territory, we anticipate another quarter of slight expansion at the overall euro area level (nowcast: +0.08% q/q).

Meanwhile, further signs of a release of pent-up demand in the UK following the decisive election outcome in early December are sure to provide some food-for-thought for the Bank of England as it mulls over a possible rate cut at the end of January.

All this added up to a Q1 2020 nowcast estimate of +0.2% q/q for the UK, a subdued rate in isolation, but nonetheless a notable improvement in underlying performance compared to previous quarters. 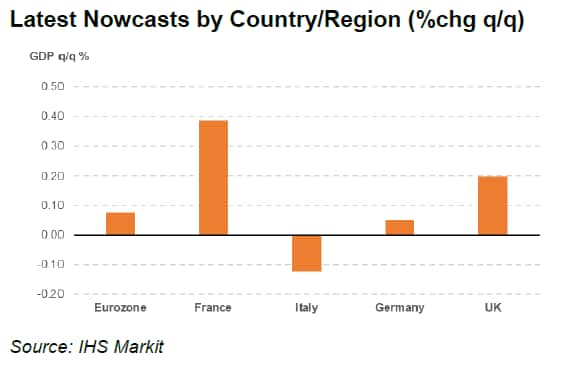