With the release of PMI data for September providing us with a well-rounded insight into economic performance for the third quarter, we have updated our nowcasts. However, we report little change since last week's influential flash PMI figures, with fractional movement at best recorded on the most part.

Our eurozone nowcast held steady at +0.04% for the third quarter, suggesting that the economy will come close to flatlining following the growth slowdown seen so far in the year-to-date. Here, forward-looking PMI indices such as new orders and employment show an economy losing steam. Indeed, the final September headline eurozone PMI fell to 50.1 (flash: 50.4), a level consistent with stagnation. Early signals from our nowcast model suggest heightened contraction risks for the fourth quarter.

Our estimate for Germany has faced several downward revisions over the current nowcast cycle, and the latest update once again comes in with a worsened trajectory (-0.31%). The last three model projections have all pointed to a contraction close to the -0.3% mark, although technical factors may see the actual GDP outturn come in not quite as severe as the nowcast anticipates.

We record no change in our third quarter nowcast for France, holding sturdy at a respectable +0.24%. PMIs here have been far more stable relative to the likes of Germany. Elsewhere, Italy's economy showed less resilience to the manufacturing slowdown. Uninspiring September PMI data failed to breathe any life back into our nowcast following the downgrade in the last update. Our model estimates the Italian economy will decline by -0.16% in the third quarter.

Last but not least, our UK nowcast was little changed at 0.1% for the third quarter, despite PMI data coming in on the soft side for September. With the exception of the immediate aftermath of the EU referendum (July 2016), survey data showed the first contraction in all three sectors (manufacturing, services, construction) since April 2009. August GDP figures are due next week, and we note that downside risks for UK growth cannot be ignored. 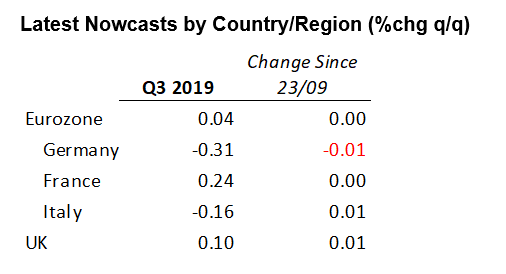 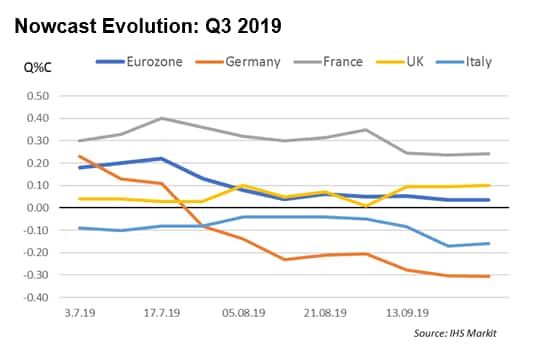