Following this morning's release of final October PMI data for the euro zone, as well as a first look into business conditions for Italy and the UK for October, we provide our first comprehensive outlook for the fourth quarter.

The early signal from our dynamic-factor model points to a shallow fall in economic output across the euro area in Q4. If our contraction estimate for Germany in the third quarter comes to pass, we would see the recession here extend into year-end. By contrast, the robust performance in France is expected to persist, while slight growth is apparent for Italy at this early stage of the nowcast cycle.

The eurozone Composite Output PMI recorded 50.6 in October, broadly signalling stagnation. However, it is within the forward-looking components where real signs of weakness lie as new business fell for a second successive month. We are currently projecting a fractional decline in economic activity of -0.03% for the fourth quarter in the euro area, reflecting the soft fundamentals seen within October survey data. We stress however that these early-stage estimates are prone to revisions as data availability increases. Nevertheless, downside risks to economic output are clear.

Across the single-currency region, France was the best-performer in October from a PMI perspective. This was also the case with our nowcast, where another solid quarter-on-quarter expansion is anticipated in Q4. We currently have growth projected at 0.36%q/q for France, which would be an acceleration from Q3. Additionally, it seems Italy is set to carry its growth trend on following the upside surprise last quarter. Our Q4 nowcast here has been upwardly revised to 0.08% as a result of stronger Services PMI and GDP figures.

On the other hand, Germany looks set to retain its status as the clear weak link among the euro area major economies. If our Q3 call of contraction comes to fruition, which we will find out next week, then Germany will see out 2019 in recession. A decline in economic output of -0.12%q/q is projected amid forecasts of disappointing trade flows and further manufacturing malaise over the next couple of months. Furthermore, evidence of spillover into the domestic economy via services was seen once again in today's PMI data.

Lastly, despite the great difficulty in point estimating UK GDP through-out 2019, our dynamic factor model has consistently straddled the 0% flat-line, either showing idle growth or slight contraction. The latter is the case for Q4, with a decline of -0.02%q/q estimated. An improvement in sterling has pulled the nowcast into less negative territory, while PMIs for October were also slightly up from September. 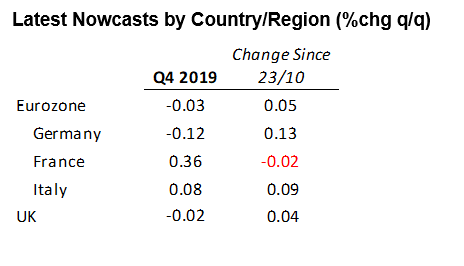