IHS Markit's flash PMI data for the G4 developed economies indicated that the pace of economic growth remained broadly unchanged in October as rising COVID-19 restrictions hit the service sector, notably in Europe, hinting at a disappointing start to the fourth quarter for the global economy. 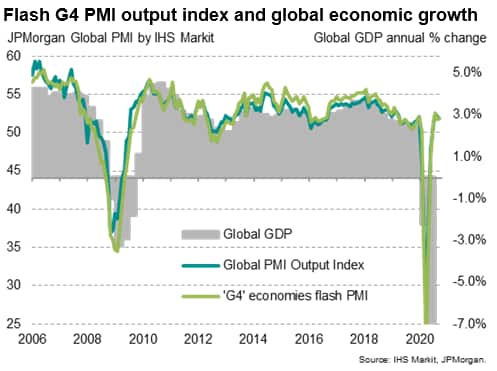 Flash PMI surveys for the US, Eurozone, Japan and UK, which collectively account for approximately half of global GDP, indicated an expansion of business activity for the fourth consecutive month in October. But at 51.9 the G4 economies' flash PMI output index was little changed on the reading of 52.0 seen in September, and below the recent post-pandemic peak of 52.5 seen in August. The latest reading is also well below the long-run survey average of 53.5 seen in the five years prior to the pandemic.

The historical relationship of the flash PMI with global GDP suggests that the latest reading is broadly consistent with the global economy growing at an annual rate of just over 2%. Note that this does not mean GDP was 2% higher than a year ago in October; it merely indicates that the global economy is expanding at a relatively modest rate equivalent to 2% per annum.

The peak rate of decline appeared in April 2020, coinciding with strict lockdowns and enforced closures of non-essential businesses across many countries. Since July, however, rising output has been recorded in the G4 economies on average, and in the wider global economy, as these severe lockdowns were relaxed. However, the September and October data have indicated a pull-back in business activity in many sectors amid second waves of virus infections.

Although manufacturing output growth accelerated across the G4 economies to the fastest since September 2018, service sector growth waned slightly for a second month running to register far weaker growth than the factory sector. Weaker service sector activity was most commonly seen in hospitality, travel and other consumer-facing services. 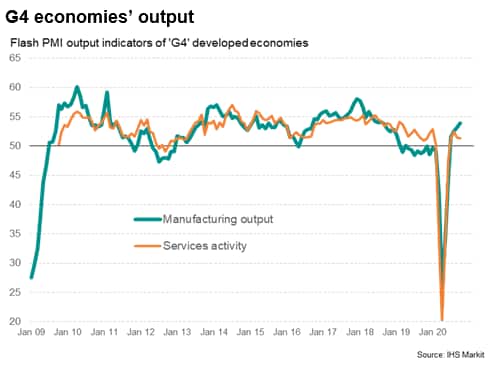 The flash PMI survey data also showed growth of new orders for goods and services slowing across the four major developed economies for a second month, with new business inflows in the service sector even stagnating during the month. Hiring likewise cooled, with the October surveys registering only a very marginal increase in employment. 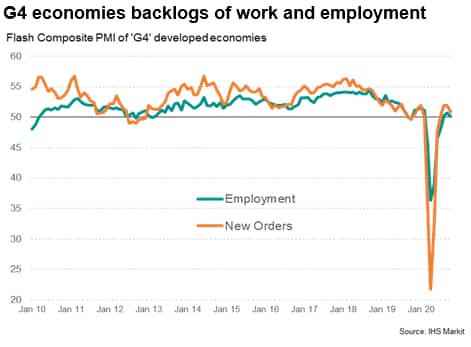 Of the G4 economies, the US reported the strongest expansion in October, with growth reaching its highest since February 2019. Although rising virus numbers continued to be seen in the US, our index of COVID-19 containment measures implemented by the authorities continued to fall during the month, benefitting many businesses. The service sector consequently led the US expansion, though manufacturing also continued to report solid growth due to rising demand from households and businesses

It was a different story in Europe, where increased local lockdown measures were implemented in the UK and containment was tightened up considerably across the eurozone to fight second-waves of infections.

While the UK continued to expand, the rate of growth slowed markedly to the weakest since the recovery from the national lockdown began in July. Not surprisingly the weakening was most pronounced in the hospitality and transport sectors, as firms reported falling demand due to the renewed virus restrictions and customers were deterred by worries over rising case numbers. The slowdown would have been even more pronounced had it not been for goods exports rising as overseas customers sought to secure orders before potential supply disruptions ahead of Brexit day on 31st December.

The eurozone fared even worse, sliding back into a downturn, though the survey also revealed a tale of two economies. While manufacturers enjoyed the fastest growth since early 2018 (as orders surged higher on the back of rising global demand), the intensifying COVID-19 restrictions took an increasing toll on the services sector, which contracted for a second month.

The divergence was even starker by country within the eurozone. Germany was buoyed by its manufacturing sector booming to a degree exceeded only twice in almost 25 years of survey history, but the rest of the region sank into a deepening downturn.

The eurozone nevertheless continued to fare better than Japan, where the au Jibun bank composite PMI remained firmly in contraction territory as output fell once again in both manufacturing and services. Some comfort can be drawn from the rate of contraction moderating to the slowest since February, however, easing most notably in services. 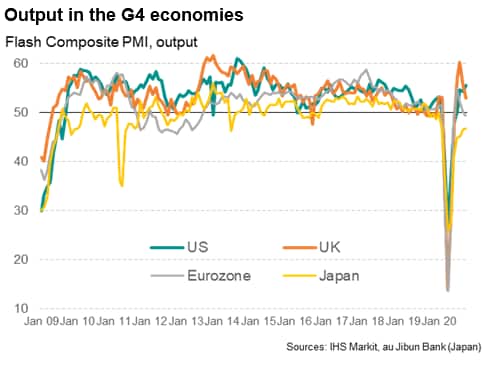 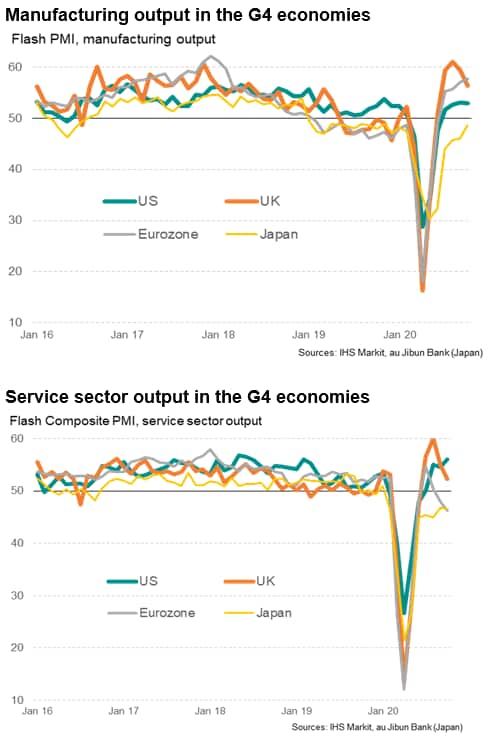 Only the US reports rise in jobs

Of the four economies, only the US reported a net increase in employment during October, though even there the rate of job creation cooled markedly. Job losses were again most commonly reported in the UK. 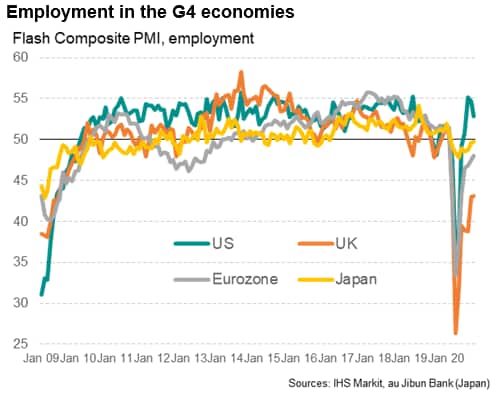