European automotive contraction extends to over a year amid lacklustre demand

September PMI® data from IHS Markit signalled a further downturn in automotive production across Europe, extending the current period of contraction to 13 months. The latest fall reflected worsening demand conditions and ongoing political uncertainty. In particular, a slowdown in Chinese consumer demand has reportedly dented growth opportunities across the automotive sector, according to surveyed businesses.

Forecasts from our Comparative Industry Service meanwhile suggest subdued demand conditions will continue into the near-term, in part due to Brexit-related worries. Some 23 major automotive industry bodies across the region released a statement in September calling for greater reassurances once the UK has exited the European Union.

After falling to a ten-year low in July, the Europe Automobiles & Auto Parts PMI has remained worryingly weak in recent months, as the rate of contraction in the automotive sector remained steep in September according to the latest release. Contributing to the marked deterioration was a sharp decline in both production and new orders. The contraction in output extended the current sequence of decrease which began in September 2018, during the height of production delays associated with the introduction of new WLTP (Worldwide Harmonised Light Vehicle Test Procedure) regulations. 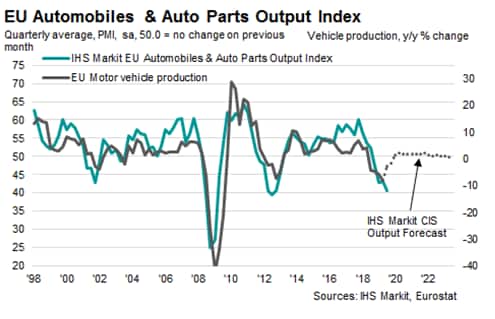 The extended soft patch has meant growing numbers of firms reporting excess capacity, meaning autos producers reduced their workforce numbers at the end of the third quarter at the fastest rate since mid-2009.

The deteriorating jobs picture from the PMI coincides with statements by industry bodies such as the Society of Motor Manufacturers and Traders (SMMT), who recently released data showing that one-in-three UK car manufacturers were cutting staffing levels amid efforts to rein in costs following a drop in demand. A shift in annual auto production schedules in the UK - moving August shutdowns to April - partly weighed on total production during the first half of 2019, with British car manufacturing output falling by 20% during the first six months to June.

Looking in more detail at the PMI at country level, key car exporting countries such as Germany and the UK have reported marked falls in foreign demand. Moreover, German automotive manufacturers expect production to continue to drop over the coming 12 months, with British producers also downbeat in the context of the series history. 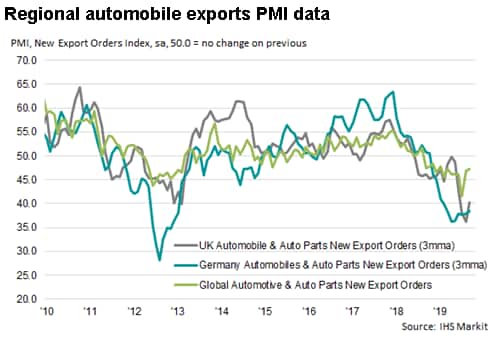 Heightened political uncertainty across the region, especially in the UK, has reportedly provided a drag on investment over the course of 2019. The greater need for and adoption of contingency plans by automotive producers in the run up to Brexit has also pushed operating costs higher and reduced investment. A recent report by the SMMT detailed the drop in spending across the UK autos sector, which at £90 million in the first six months of 2019 is 70% lower than last year. Contingency plans are seen as key for a sector where the EU remains the largest export market for British producers, with the EU accounting for 57% of exports from the industry.

Another crucial factor behind the recent contraction in production has been a notable decrease in demand in China. According to the China Association of Automobile Manufacturers (CAAM), automotive sales in China fell by 5.2% in September, marking the fifteenth successive monthly decline in car purchases. Our automotive experts currently foresee total light-vehicle sales in China falling 7.6% in 2019 and flatlining in 2020.

That said, some major cities in China have loosened their new vehicle quotas in an effort to boost sales and have increased investment in electric vehicle research to help secure future development. However, sales of electric light-vehicles have dropped notably following the recent decrease in subsidies for purchases and an extension in the requirements needed for a vehicle to qualify under the scheme. As such, new energy vehicle sales across China declined by 34.2% in September. 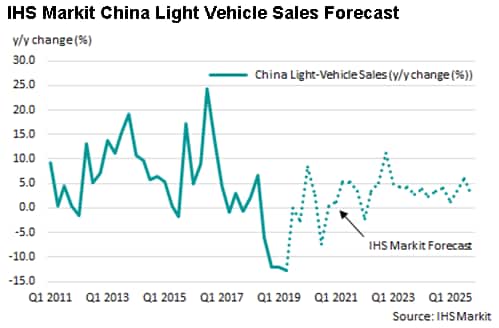 Following a lacklustre performance across the European automotive sector in 2019, our Comparative Industry Service are expecting growth to return in 2020, with output forecast to rise by 1.8%. Panellists contributing to the Europe Automobile & Auto Parts PMI, however, remain downbeat towards output expectations over the coming 12 months, with the degree of confidence at its second-lowest since sentiment data were first collected in July 2012.

That said, optimism is dependent on any conclusions to ongoing political uncertainty and an improvement in Chinese demand. Any such change in underlying conditions could free up capital to be invested in research and development for projects such as electric vehicles which will become ever more important. 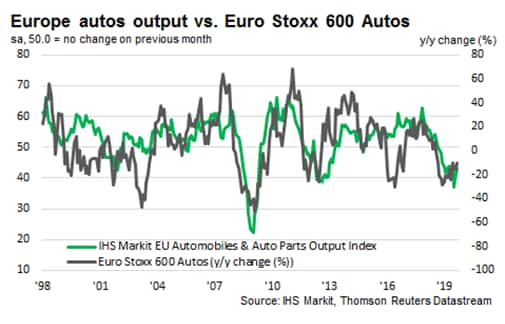