IHS Markit's flash PMI data indicated divergent economic trends among the major developed economies in November, with accelerating growth in the US contrasting with renewed downturns in the eurozone and UK, while Japan's downturn eased.

To a large extent, the varying economic trends reflected the introduction of tougher COVID-19 restrictions in many European countries as governments sought to contain second waves of virus infections, while the US relaxed its restrictions and Japan left its measures unchanged.

The data hint at a modest cooling of global economic growth, though nothing approaching the severity of the downturn seen earlier in the year at the height of the pandemic.

Manufacturing generally fared better than services, thanks to rising global trade, and sentiment improved amid encouraging vaccine developments. However, only in the US, and to a lesser extent, Germany, did this translate into higher employment.

Flash PMI surveys for the US, Eurozone, Japan and UK, which collectively account for approximately half of global GDP, indicated an expansion of business activity for the fifth consecutive month in November, though the rate of expansion was the weakest since the recovery from severe lockdowns in the second quarter began. At 51.2, the G4 economies' flash PMI output index^ was down from 52.6 in October, and also well below the long-run survey average of 53.5 seen in the five years prior to the pandemic. The reading therefore hints at a slowing in the rate of expansion to a pace further below the recent long-run average.

^The flash PMIs are based on around 80% of the total number of survey replies usually received. As such, they provide the first, internationally comparable, insights into how economic conditions are changing. Currently, flash PMI are produced for the United States, the eurozone, Japan, the United Kingdom and Australia, encompassing manufacturing and service sectors in each economy. These survey data can in turn be weighted together according to each country's GDP to form international aggregates. Weighting the US, eurozone, UK and Japan PMIs together, for example, creates a "G4 developed world" series of indicators, covering output, new orders, employment, inflation etc.

Because the four largest developed economies account for approximately half of global GDP (at market prices), the G4 flash PMI output index acts as both a good indicator of the Global PMI as well as global GDP growth. Since 2007, when IHS Markit's US PMI series was first included in the global PMI database, the flash PMI has exhibited a 94% correlation with annual percent changes in global GDP with the PMI acting with a lead of one quarter. 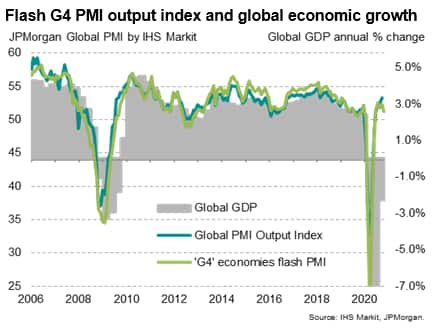 Although manufacturing output growth rose collectively across the G4 economies at the strongest rate since May 2018, growth of service sector output stalled after four months of recovery. 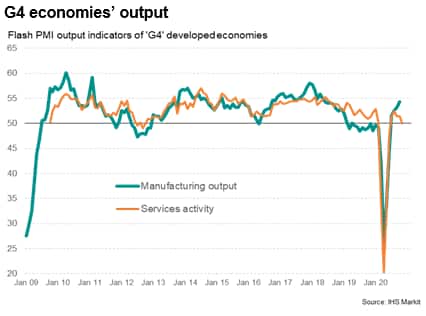 Europe contracts while US accelerates

The weakened expansion was attributable to renewed downturns in Europe, with the flash Eurozone composite PMI sliding from 50.0 to 45.1 in November while the equivalent index for the UK slumped from 52.1 to 47.4, indicating a return to decline for both economies for the first time since June. The index for France fell especially sharply, from 47.5 to 39.9, but Germany remained in expansion territory, albeit with the PMI slipping from 55.0 to 52.0 to register a marked easing in the rate of growth.

The comparable flash US PMI meanwhile rose from 56.3 in October to 57.9, its highest since March 2015, to signal a strong and accelerating rate of economic expansion.

Meanwhile in Japan, the equivalent au Jibun Bank PMI - also compiled by IHS Markit - fell from 48.0 to 47.0, indicating a further decline, but remain at a rate of contraction far weaker than the severe declines seen earlier in the year at the height of the pandemic. 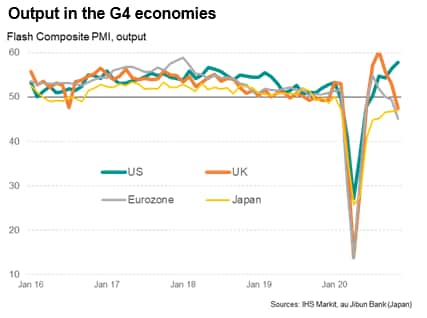 With the exception of April this year, at the height of the pandemic, the divergence between the US's expansion and the Eurozone's slump was the widest seen over the past two decades (using ISM data for the US prior to 2009). This divergence came at a time of rising COVID-19 infection rates in Europe and the US, though it was only the former that saw governments act to contain the spread of the virus. 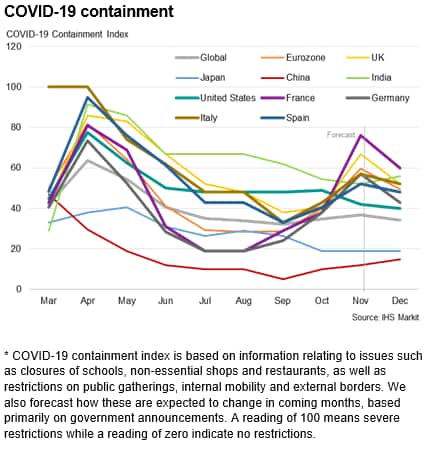 IHS Markit's COVID-19 Containment Indices, which use a basket of measures to assess the extent to which economies are 'locked down' to fight the spread of the virus, rose sharply between October and November in the Eurozone and UK (indicating tighter restrictions, but fell in the US (indicating looser restrictions).

The Containment Index for the Eurozone rose from 40 in October to 60 in November, rising in all four largest euro members (though most aggressively in France), and increased from 41 to 67 in the UK. In contrast, the index fell from 49 to 42 in the US. It meanwhile held steady at 19 in Japan, indicating an unchanged level of restrictions.

The biggest divergences in economic performance were seen in the services sectors. Activity fell sharply in the eurozone and UK, and continued to fall in Japan, amid COVID-19 restrictions, which hit hospitality activities, tourism travel and transport especially hard. In the US, however, service sector growth accelerated to the fastest since March 2015, fueled by the reopening of the economy in many states as well as a marked rise in business sentiment.

It's notable that even in those countries which were the hardest hit by renewed COVID-19 containment measures - such as France and the UK - the rate of service sector decline remained far weaker than seen at the height of the pandemic earlier in the year. For example, while the services PMI for France fell to 38.0 in November, that compares with a low of just 10.2 back in April at the height of the first wave of the pandemic. Similarly in the UK, the services PMI reading of 45.8 in November indicates a markedly smaller contraction of business activity than the low of 13.4 seen back in April.

The more resilient picture of service sectors during the second waves of infections appears to reflect a number of factors.

First, the actual lockdowns are not as severe as earlier in the year, as indicated by the COVID-19 Containment Indices.

Second, an important aspect of the second lockdowns has - for many countries - been the continued opening of schools as well as the continuing functioning of many other businesses, especially in manufacturing.

Third, the second waves have not led to a 'global' shutdown. Whereas the first wave of infections earlier in the year led to a synchronised lockdown (albeit with China having shut down earlier), many economies - such as the US but also importantly including China - have not seen anything like the levels of containment imposed earlier in the year in recent weeks, and have even opened up in many cases. Global demand has therefore remained relatively resilient compared to earlier in the year, benefitting exporting manufacturers around the world as well as those service providers whose businesses are to any extent tied to manufacturing (such as transport and industrial services).

The sustained expansion of global demand for manufactured goods meant eurozone and UK manufacturers were able to continue to expand production in November, while US producers even reported an acceleration of output growth to the fastest since March 2015.

However, the picture is tainted somewhat by Japan's producers reporting a slightly increased rate of contraction, and UK manufacturing having been buoyed by a temporary boost as customers stockpiled ahead of a potentially disruptive end to the Brexit transition period at the end of the year. This boost will likely fade. 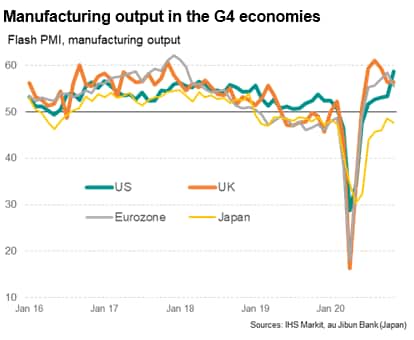 US hiring surges amid renewed optimism

More encouragingly, news of successful vaccine trials helped bolster business confidence about the year ahead, which rose especially markedly in the UK and the US, the latter buoyed also by rising sentiment about the year ahead following the presidential election. 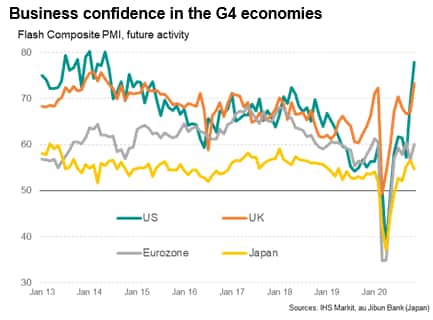 The marked improvement in US sentiment also fed through to higher employment, with the US PMI composite employment index for the US rising to the highest since the survey began in 2009.

In contrast, jobs continued to be cut in the eurozone, UK and Japan as companies remained focused on keeping costs low amid the uncertain demand environment. One exception was Germany, where a small net rise in jobs was recorded, reflecting the country's relative resilience and less-severe lockdown measures than the eurozone average. 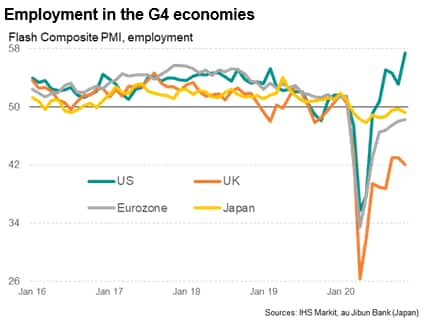