Europe is stepping up its 2030 climate target – what does this mean?

The European Union is currently re-evaluating its 2030 target to align it with the 2050 net zero carbon ambition. Currently the EU's aims to reduce emissions by 40% of compared with the 1990 level, which Europe is on track to meet.

A decision on the new 2030 target is a collective effort, a process called Trilogue, by the Commission, Parliament and the Council which represents the heads of state of European member states. The European Commission has proposed a reduction of 55% of emissions by 2030, Parliament suggests a 60% reduction.

Due to the magnitude of this decision, the Council's position is expected to prevail. Several member states have made their position clear: a number of Western European countries are advocating at least 55%, while Germany supports a 55% target. Those countries that have not expressed a preference are likely to be concerned about the cost implications of a faster energy transition and are possibly seeking guarantees that Europe will assist them financially. By early 2021, Europe is likely to have agreed to a new 2030 target. IHS Markit expects the EU will agree on a 55% target, but a slightly lower target cannot be ruled out.

As important as the headline number is the fine print that is also part of the discussion: will all countries need to achieve climate neutrality in 2050 or will the obligation rest of the EU as whole? Will Europe introduce a 2040 target? What will be the role of offsets in meeting the 2030 ambition? Will abatement outside of the EU be allowed to count towards national goals? 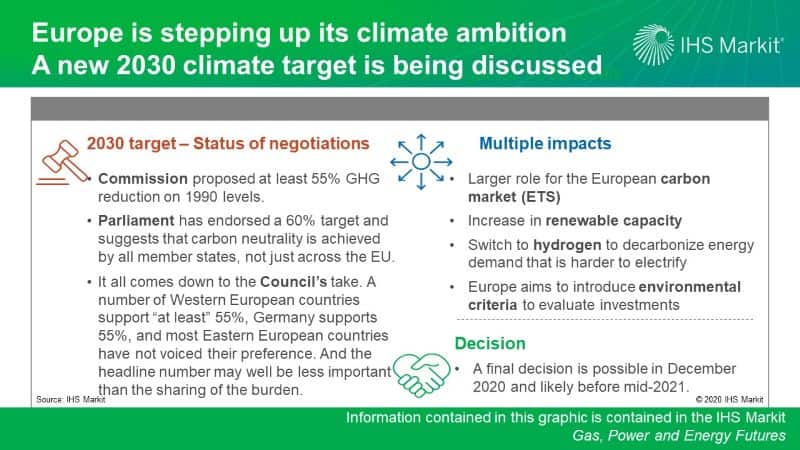 One of the most visible impacts of the new 2030 target is likely to be a larger role for the European carbon market. Today, the emissions trading system (ETS) regulates emissions for power and industry in Europe. At the very least, its ambition will be increased - by tightening parameters such as the linear reduction factor, the level of the cap or the market stability reserve. The EU is also discussing including new sectors - shipping, transport and buildings are in the short list. Whatever the sectors included, the tightening of the cap and the growing pressure on the industrial sector will lead to higher carbon prices. Prices are unlikely to spike to the three-digit levels, however: IHS Markit expects that industrial decarbonization will come from a layering of policies, not just the ETS.

To meet a higher climate ambition, renewable capacity will increase. The renewable target is likely to rise from the current ambition of 32% to over 38% of renewables in energy demand. To deliver a higher 2030 target, renewable additions in power will need to accelerate in the next decade beyond our current growth outlook of 400 GW.

The role of low-carbon hydrogen stands to grow as it offers a route to decarbonize energy demand that cannot be electrified. The EU and six countries have issued national strategies - all after the start of the COVID-19 crisis, a sign that hydrogen is integral to green recovery - identifying low-carbon gas as a preferred option to decarbonize industry and possibly buildings and transport.

Finally, Europe is finalizing the sustainable finance taxonomy which, from 2022, will identify what investments are green and, crucially, which are not. The taxonomy will be used to award the EU recovery and budget funds and the finance sector will be required to disclose how their investments align with it. For the power sector this raises two questions: will nuclear and gas investments be viewed as sustainable? Nuclear's status depends on whether nuclear waste meets the 'do not harm' principle of the taxonomy and the current proposal requires that thermal plants emit less than 100gCO2/kWh ruling our new natural gas fired plants without carbon capture and storage. Sustainability definitions will also be important for hydrogen project development.

The next generation of Europe's climate policy will be agreed in the next years, IHS Markit expects it will deeply reshuffle the playing field in Europe's power and gas markets.