The European Parliament on 20 May adopted a resolution stating that the ratification process of the EU-China Comprehensive Agreement on Investment (CAI), agreed in principle in December 2020, would be "frozen" by the Parliament while Chinese sanctions remain in place. China imposed sanctions against five members of the European Parliament (MEPs) and four entities and members of the Dutch, German, and Lithuanian parliaments measures in response to a 22 March Council of the European Union decision to impose restrictive measures, including travel bans and asset freezes, on four Chinese officials.

China was the EU's second-largest trade partner in terms of the total value of trade in 2020, with the EU running a trade deficit of USD186 billion. However, foreign direct investment (FDI) flows have been substantially lower than the sheer size of the two sides' populations, and potential markets would imply. Despite EU companies historically being more active in China than vice versa, the EU's FDI outflows to China represented less than 2.5% of extra-EU FDI in 2017. EU FDI into China has been limited by factors such as a lack of market access, complex and costly regulations, and weak intellectual property protection. The largest share of EU direct investment into China has been in the manufacturing sector, particularly in the production of transport equipment and machinery. The service sector, on the other hand, only accounted for an average of around 10% of the total. 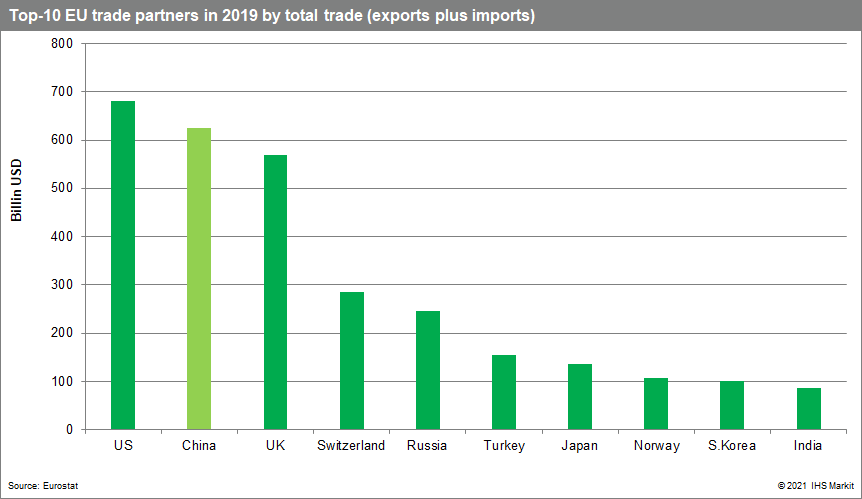 China's motivations for the CAI

The CAI likely serves both economic benefits to China and also supports its domestic and external political goals: the CAI is likely to encourage European companies to increase investments in China in emerging sectors such as renewable energy, cloud computing, and financial services. Furthermore, successful implementation of multilateral trading agreements will be viewed favorably ahead of upcoming important political events, including the Communist Party of China's (CPC) centenary celebrations in July 2021 and an upcoming leadership transition at the late-2022 National People's Congress. Externally, the accelerated negotiation process leading to its signing, within a crucial time window before the end of Germany's presidency of the Council of the EU and prior to the inauguration of the President Joe Biden administration in the United States, indicate geopolitical targets of strengthening China-EU relations to undermine the prospect of US-EU alliances against Chinese interests. 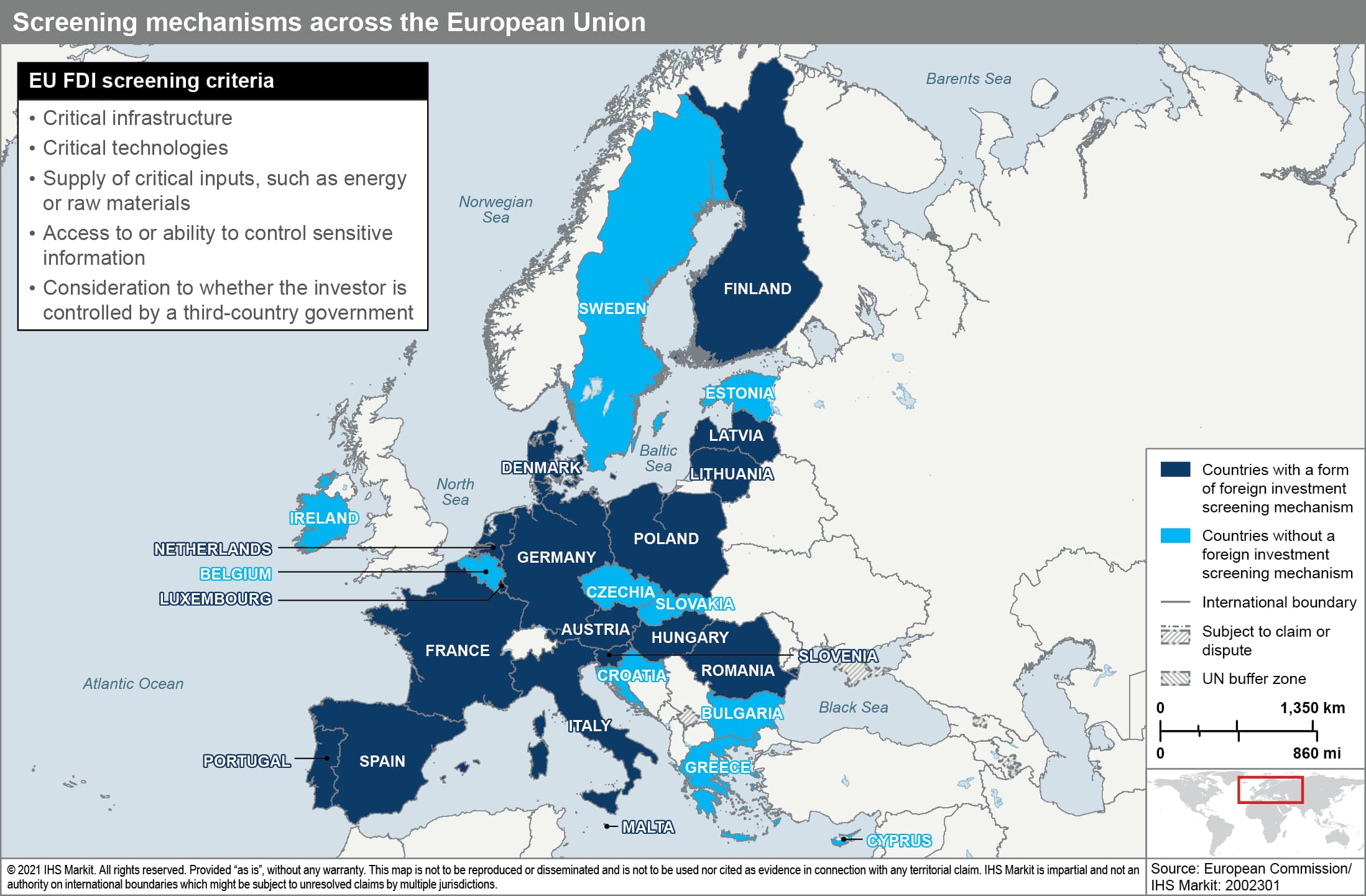 EU's motivations for the CAI

Key provisions of the CAI are intended to improve market access and remove operational obstacles for EU firms operating in China in sectors such as manufacturing and various services sectors. The forced transfer of technology to a Chinese counterpart in a joint venture (JV) has, for instance, been considered particularly problematic by EU businesses. Externally, the CAI's signing ahead of US President Biden's inauguration in January 2021 advanced the EU's long-standing trade policy objective of removing market barriers and increasing legal protection for EU companies in China. Additionally, the EU almost certainly wanted to signal to the US its willingness to broker deals with China rather than remaining on the receiving end of any US-China strategic competition. EU governments and firms were most likely dissatisfied with the US-China Phase One trade deal of January 2020, which left European companies in China at a presumed relative disadvantage.

Despite strong interest in the CAI's passage back in early 2021, the level of response from China indicates that, at least in the short term, the Chinese leadership would place emphasis on the projection of political strength domestically, even if these are at the expense of some economic interests. The decision by China to sanction elected MEPs and EU bodies, such as the EU Council's Political and Security Committee, indicates a desire to demonstrate that it will escalate beyond what the EU was likely expecting as a tit-for-tat response, and have likely anticipated that it would undermine the CAI's ratification in the European Parliament. Consequently, the likelihood of China reversing its sanctions to facilitate ratification of the CAI within its original schedule will remain low, especially if the EU continues to challenge Beijing on politically sensitive areas.

On the opposite side in the EU, Chinese sanctions against MEPs, including two from the largest political group - the center-right European People's Party (EPP) and one from the second largest - and the center-left Progressive Alliance of Socialists and Democrats (S&D), have become a key roadblock to any prospect of the CAI moving through the European Parliament. The European Parliament's resolution from 20 May was widely supported by EU parliamentarians, being approved by 599 to 30 votes with 58 abstentions. On the EU side, the CAI requires ratification by both the European Parliament and the Council of the EU.

Despite political hurdles, both sides have maintained the possibility of restarting ratification in the future. The Chinese response to the European Parliament's resolution which halts the ratification process has so far been relatively measured, with state media outlet Xinhua highlighting that the Chinese legal review and the translation process for the CAI are still proceeding normally. Furthermore, China has indicated its intention to preserve stability in the EU-China relationship, limiting risks of retribution over current political disputes. On an inspection tour of the Business & Innovation Centre for China-Europe Cooperation in Chengdu, Sichuan province, on 21 April, Chinese premier Li Keqiang highlighted the continued planned opening of markets and "fair competition" for European and other foreign businesses. This is a positive indication for European businesses seeking to take advantage of the anticipated liberalization of Chinese markets included in the CAI. However, companies will continue to be exposed to politicized regulatory barriers, legal and reputational risks, and nationalistic-driven boycotts as China is unlikely to compromise on issues of EU concern, such as human rights issues, industrial policy, or national security.