EU passenger car sales have posted another very strong set of numbers as replacement demand from both private buyers and fleet buyers fuelled the market.

After an Easter-inspired slowdown in sales growth in March the passenger car market in the European Union (EU) regained very strong momentum in April, rising 9.1% year on year (y/y) to 1,273,733 units, according to the latest data published by the European Automobile Manufacturers' Association (ACEA). This strengthened the year-to-date (YTD) sales trend to 8.5% y/y, with 5,094,026 units. Sales in the European Free Trade Agreement (EFTA) area - Iceland, Norway, and Switzerland - in March gained 4.5% y/y to 45,087 units and in the YTD rose 3.1% y/y to 157,731. 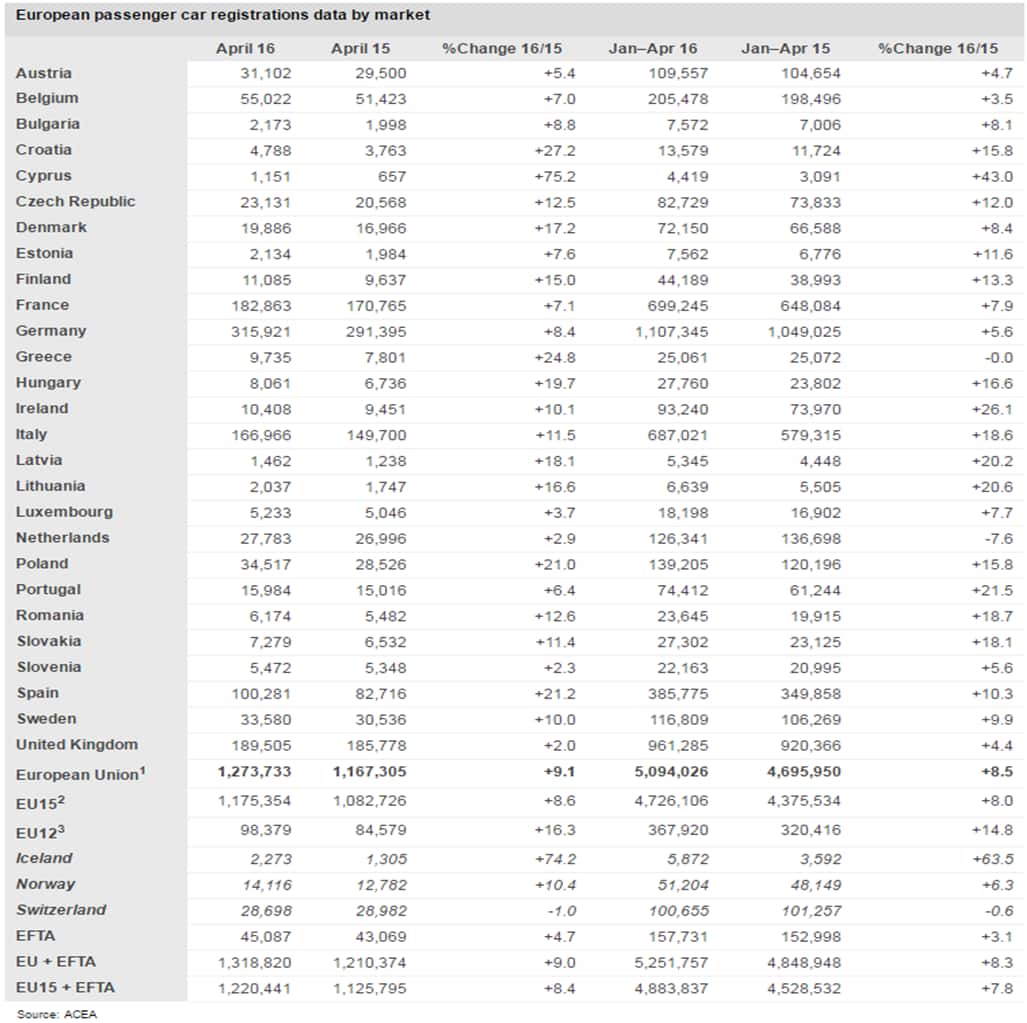 On a market by market basis all the major Western European markets recorded extremely positive increases during April. The German market posted a very positive uplift of 8.4% y/y to 315,921 units, with the German premium brands in particular recording strong results. Spain and Italy each recorded a very strong double-digit increase, of 21.2% y/y and 11.5% y/y respectively, as sales were bolstered by both the fleet and hire car markets, with a high rate of replacement registered for the summer holiday season in both countries. The French market also recorded a robust rise with a 7.1% y/y rise. But the UK reported a slowdown in growth after the record-breaking March, which was fuelled by the bi-annual plate change. Sales in the UK edged up 2% y/y to 189,505 units. Other notable market performances in the EU during April included a 21% y/y increase in Poland to 34,517 units and a 10% y/y rise in Sweden to 33,580. 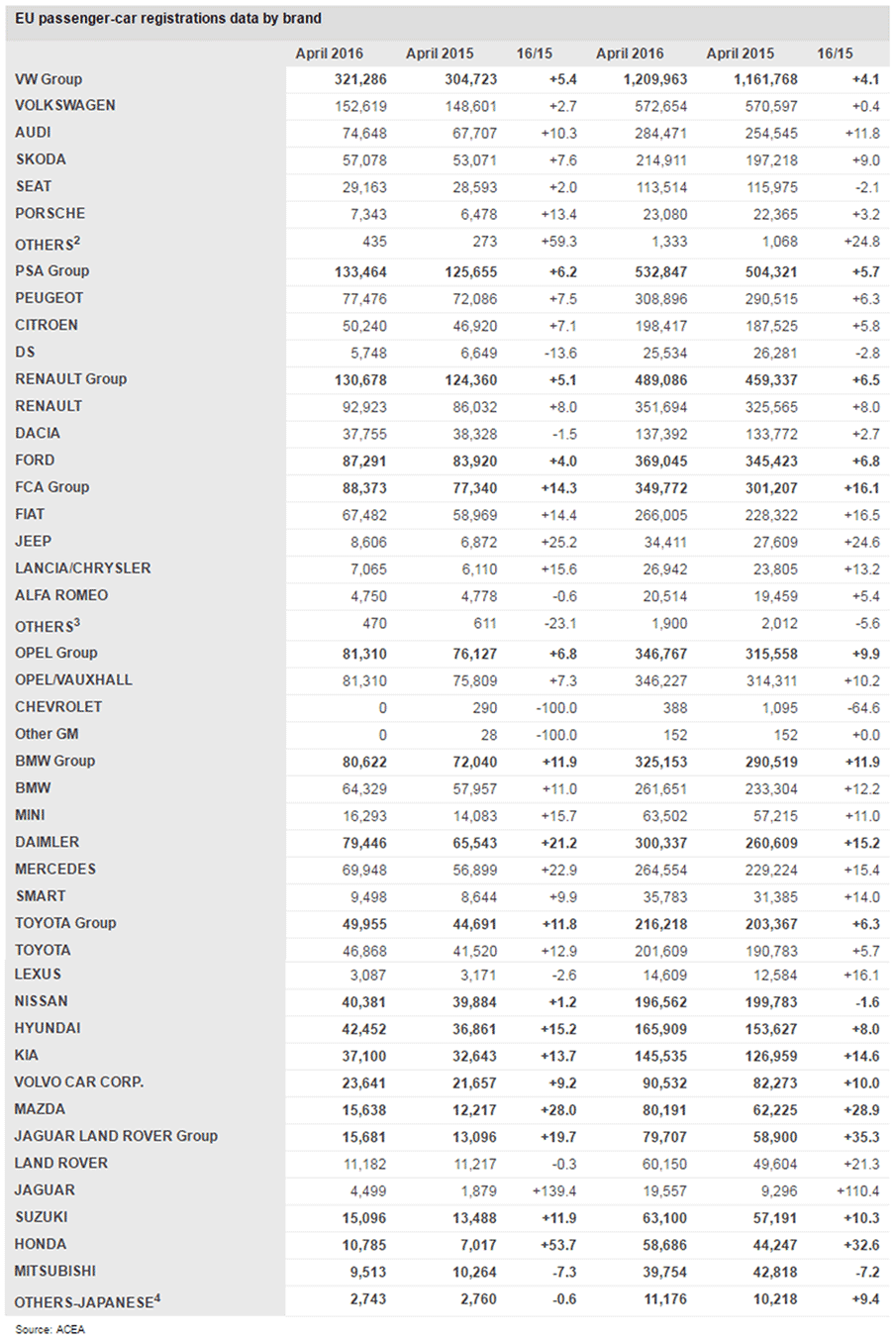 The VW brand itself followed the pattern of recent months by underperforming the wider market, with a 2.7% y/y increase to 152,619 units, with the YTD improvement at 0.4% y/y to 572,654 units, a significant underperformance of the wider market. The company's recently launched second-generation Tiguan SUV should raise sales momentum, although key models such as the Golf and the Polo are well advanced in their model cycles. The Audi brand rose at 10.3% y/y during April to 74,648 units with an 11.8% y/y rise to 284,471 units, with strong A4 and Q7 sales backing this result. Skoda was also a strong performer with a 7.6% y/y rise to 57,078 units in April.

Second-largest OEM Groupe PSA also posted a slightly underwhelming performance, with a 6.2% y/y increase in April to 133,464 units, with many of the company's best-sellers moving into their model cycles, such as the Peugeot 208 and Citroen C4 Cactus. But the real brake on performance came from the DS brand, which recorded a double-digit decline. The group's sales improvement underperformed the overall market's 9.1% y/y rise. In the YTD, sales rose by 5.7% y/y to 532,847 units. Peugeot sales rose 7.5% to outperform Citroen, which posted a 7.1% y/y increase.

The Renault Group's sales also underperformed the wider rise with a 5.1% y/y increase to 130,678 units. The Dacia brand dragged down group performance with a 1.5% y/y fall to 37,755 units, while the Renault brand posted an 8.0% y/y rise to 130,678 units. The Renault brand will get a boost in the second half of the year when the Scenic is launched. The well-received model is likely to be an initial success with buyers.

The FCA Group was the best performing group in the top-five in terms of sales growth. Its 14.3% y/y increase was fuelled by a 14.4% y/y improvement by the Fiat brand and a 25.2% y/y surge for Jeep, propelled by the Renegade's continuing strong performance.

In April, the market posted another set of very positive figures. "Sales remained buoyant throughout the continent," said IHS Automotive's manager for the European light-vehicle sales forecast. "For those markets that flattened a bit in March (most notably Germany and Spain), a neat uptick was witnessed in April. This was expected since it was largely a calendar effect due to the Easter period. At a trend level, Europe keeps following a very positive and robust track. Once again, this is a very good sign since we have entered a period when the base comparison could have started to 'play against the numbers'. That is, we are now increasingly comparing to much healthier monthly levels than ever before (at least for the past six years or so). Hence these robust results mean that the market is really benefiting from a very strong and deep momentum that is not abating at all."

Pent-up demand remains a significant player in boosting the market, with both the private and fleet markets contributing to this uplift. Private demand has been a particular catalyst in the Southern European countries such as Spain and Italy but is showing signs of rising in Germany and France too.

Given the current overall situation in Europe - characterised by low commodity prices, very low inflation, increasing disposable income, less austerity, reduced unemployment - customers are in a fairly strong position and this is clearly translating into the market. At this stage there is no serious reason to think this robust market position should disappear in the very short term.

Yet risks remain. The global economy, and especially emerging economies, remain fragile. The EU's integrity is at risk with the UK membership referendum. Other issues such as security and immigration remain high on the political agenda. For the full year IHS Automotive expects a slowdown in momentum in the final two-thirds of the year, with sales of 14.2 million units, equating to a 3.5% y/y rise.