While daily news across Europe are filled with doom-and-gloom reports of delays in the roll-out of COVID-1 vaccines, the latest actual data doesn't look too bad. Daily administration rates of COVID-19 vaccines in EU countries show that countries that have languished near the bottom of the vaccination league table have slowly begun to catch up to the top-performing member states. This means there is broadly speaking a reasonable likelihood that most of them will meet their short-term objectives to vaccinate high-priority risk groups as scheduled. 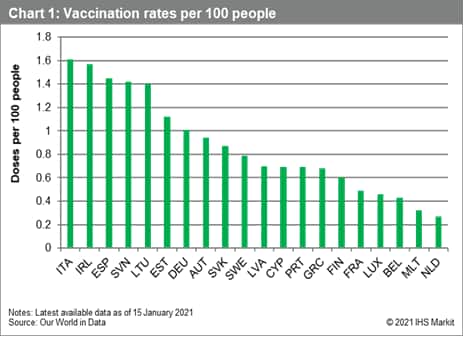 However, this will be to a large extent dependent on no further major vaccine supply disruptions in the one- to two-month outlook. Manufacturers have offered reassurance that the delivery schedules will be largely maintained, although there is still major uncertainty. Overall, the IHS Markit forecast, outlined in its Weekly COVID-19 R&D tracker, of broad access to vaccines, which will negate the need for non-pharmaceutical interventions such as lockdowns, by mid-2021 remains in place.

Italy and Germany continue to lead the field of EU countries according to Bloomberg and national trackers, with more than 1,153,501 vaccine doses administered in Italy as of 17 January and 1,048,160 vaccine doses deployed in Germany as of 16 January. Spain has the next highest cumulative rate of vaccination at 768,950 doses as of 15 January, followed by France with 422,127 doses administered as of 17 January. France is still trailing behind the leading countries, but the latest data released by the French Ministry of Health suggest that the country received 1,651,000 COVID-19 vaccine doses and used 25.6% of these so that 0.7% of the population has been given at least one dose. The daily average in the past 24-hour period amounted to 9,081 doses per day. However, the typical daily average is running at about 40,000 and peaked at 70,500 on 14 January.

Although EU healthcare systems have started to show encouraging signs of rapid increases in the number of vaccine doses that they are capable of administering per day, the situation on the continent is increasingly poised on a delicate knife-edge. Looking ahead to the next one-month outlook, uncertainty about supply is the main potential choke point in national vaccine programmes and is the most pressing area of concern. There is also a growing risk that rising COVID-19 infection rates and increased pressure on hospital systems could hit some EU member states before vaccination programmes are fully ramped up. That could once again threaten to overwhelm national healthcare systems and prompt governments to consider extending lockdowns. A case in point is Ireland where an estimated 6,400 healthcare staff are currently isolating even as hospitals face a peak in COVID-19 cases. This has led to members of the National Public Health Emergency Team (NPHET) warning that socioeconomic restrictions could be required until May.

France appears to be in a similar situation, with new infections rising to about 18,000 per day. This has recently prompted the French government to impose a nationwide curfew and enforce tighter border controls. The French situation is exacerbated by increases in the number of cases involving the B117 variant of the COVID-19 virus, with at least 200-300 cases per day detected, according to Minister of Health Olivier Véran. Some modelling has suggested that France could be between six and eight weeks behind the very-high UK infection curve for the more transmissible B117 variant and potentially other variants. The situation in Spain is also a cause for concern, with the COVID-19 infection rate reportedly climbing 60% week on week to 575 cases per 100,000 residents.