The next wave of regional ethylene capacity additions

Do we anticipate another regional wave of ethylene production capacity additions like those wehave seen historically in the Middle East, Asia, and currently in North America? The base case view for the coming three to five years is that global ethylene demand growth will remain strong. This case is based on a few key drivers:

Our expectation is demand growth in the range of 6.5 million metric tons per year (see Figure 1). To meet this demand, we need 7.0 million tons per year of capacity additions when we take into account sustainable operating rates near 90%. 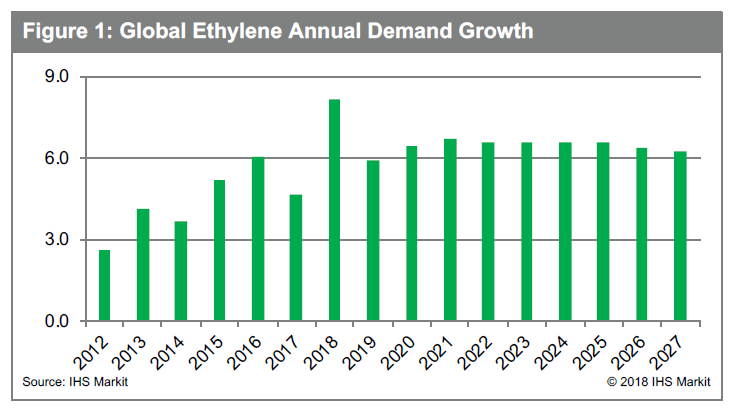 This capacity growth must be covered by new ethylene production assets, as the base load system during 2016/17 was barely sufficient to keep pace with demand. In short, we cannot depend on existing spare capacity to cover some of the shortfall. Rather, we need new builds to address growth and maybe more capacity to offer some buffer. If this build were ethane-fed crackers alone, at 1.5 million tons per year of capacity for a world scale unit, we would need five new units each year. If the build were only naphtha-fed crackers, the build requirement is more likely to be seven new units per year.

Where will this capacity be built? Four key drivers help determine this outcome:

The least risky projects would have all of these key parameters in their favor, but having two or three of the four could be sufficient to drive the investment decision. The current forward view, taking into account these four key variables, is an expected "wave" of capacity coming to China. In fact, nearly a third of all new assets are expected to be built there over the next 10 years (see Figure 2). 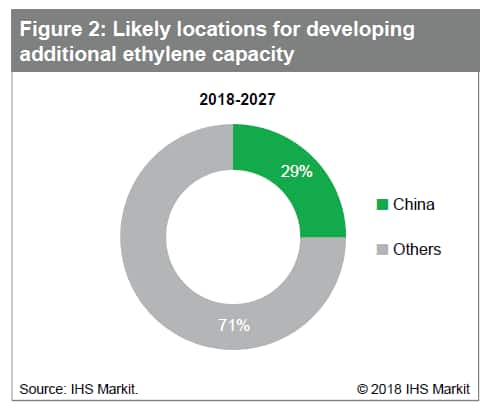 Why is China a likely site for capacity investment? Let's consider how it performs against these four criteria.

Ranking China as an Investment Location

As a major energy importer, China falls short on the first key driver: feedstock advantage. China does have a large reserve of coal, but the processes required to convert this to chemicals need b oth high oil prices and improved environmental footprint technologies to make coal viable.

From a legal, political, and social perspective, China continues to progress. New investment for chemicals is coming more from the private sector than state-owned entities. Confidence is improving, thanks to a more open market with a very large labor pool looking for employment in petrochemicals.

The cost of construction is an advantage that can offset some of the negatives of higher feedstock costs. With its large labor pool, improving capabilities in technology, and large mining resources, China has continued to increase the local content of parts in large petrochemical facilities. This advantage, combined with rapid progress on the learning curve, is driving the China construction process to near half the total cost of a similar plant on the US Gulf of Mexico coast. This is a tremendous build plus for China.

On top of this cost advantage, China is experiencing the build-out of many complementary industries, creating scale not available in many parts of the world. As shown in Table 1, China is building on a mix of feeds, with the largest portion of new builds coming with integrated refining and petrochemical sites. 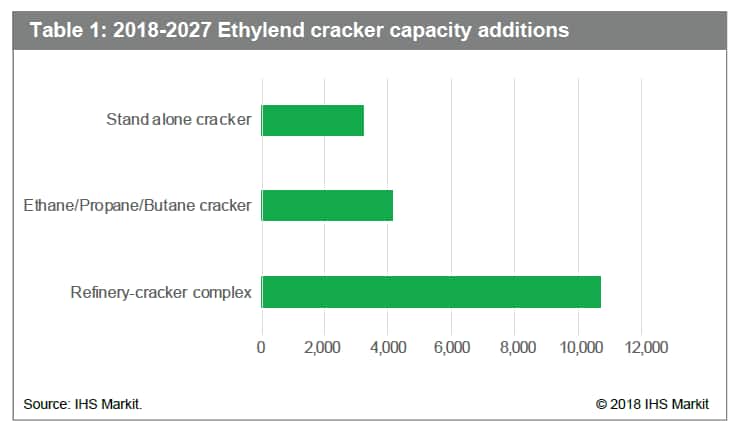 But, China is not the only region with capacity potential. Table 2 shows the relative advantage of other regions on the four variables:

With these regional considerations in mind, countries and companies in each of these regions will work to weigh the plusses and minuses of these drivers to make their build decisions. IHS Markit's global analysis of ethylene covers many of these points. Count on us to assess the capacity additions and investment decisions needed to meet the growing global appetite for ethylene.

Stay ahead of the competition with reliable 10yr forecasts

Has the global #paraxylene market reached a turning point where profitability returns to the industry or is the cur… https://t.co/VTQDa8QWyS