The increasing presence of exchange traded funds in the capital markets has extended to many classes of investors, with retail investors seeking low fee passive vehicles, while operational ease of use has drawn many institutional investors. The total AUM for global ETFs reached $5tn this year, an increase of $280bn compared with end of 2017. The increasing use by institutional investors is reflected by the growth in lendable assets in securities lending, which also reached a new high this year, though like total AUM, has declined with markets in Q4. Compared with 2017 average, global ETF lendable assets have increased by $58bn in 2018.

The revenues associated with lending those portfolios have also been trending higher, with the $342m in YTD revenues poised to best the 2017 total of $345m before the end of November. The $52bn in average balances QTD is the highest on record for any quarter, despite the sell-off in global assets. The good news for ETF holders is that utilization of lendable supply has also trended up this year, from 9.1% in Q1 to 11.3% in Q4. 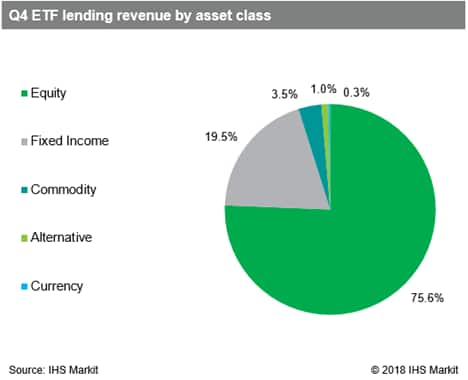 The key driver of borrow demand: exchange traded products are popular with short sellers, as they allow for the efficient expression of a view on a wide range of asset classes. That allows hedge funds to gain short exposure to a given sector or asset class both as a directional view or as a hedge to a specific long. At the top of the list of most revenue generated funds YTD: the USD high-yield index tracking funds HYG and JNK, though, equity funds drive the bulk of total revenue (75% QTD, up from 70% in Q3). The $52bn in borrowed ETFs equates to roughly a third of short positions reported to exchanges. The other two thirds are largely created from borrowed fund constituents which are exchanged for units of the ETFs. The ability to "create to lend" often keeps a lid on the lending fees for holders of the ETFs; however, the products which are more challenging to create can still command non-GC rates (for example, JNK and HYG currently have fees greater than 200bps.)

Not all ETFs can be created out of borrowed securities, in particular those with exposure to illiquid asset classes. One such example is the Invesco Senior Loan ETF, BKLN, which consists of a basket of leveraged loans. The fund has seen increased demand from short sellers in Q4, with over $800m in current loan balances. Only a small handful of the underlying loans have any availability in securities lending, so borrowing shares from long holders of the ETF is essentially the only means of sourcing the borrow. Lenders have attempted to pass through increased rates, though the increased fees in late October and early November saw an immediate response of returned shares, driving fees lower. Once the borrow fee declined the balances picked up and fees have started to move up again. It's worth noting that BKLN has a 67bps expense ratio, which means that if short sellers can borrow for less than that rate there is an arbitrage assuming no movement in the underlying asset class. Additionally, the YTD increase in OBFR means that short selling any easy-to-borrow asset will result in a positive rebate to cash proceeds. 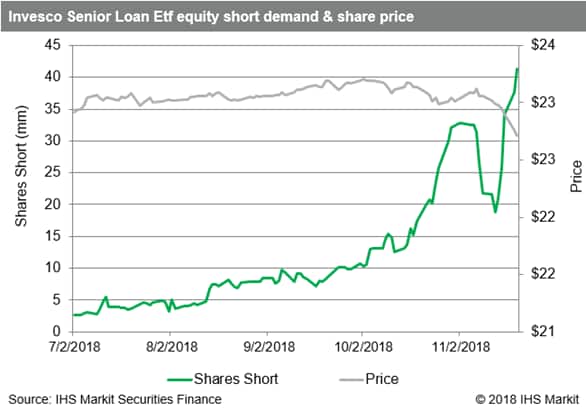 Generally speaking, hedge funds would prefer to be short ETFs with higher expense ratios, as that is a direct drain on the fund's performance; however, most funds will achieve securities lending revenues which partially offset the fund expenses, making this analysis less precise for funds which lend. Another factor in selecting exchange traded products for short positions is the liquidity of the ETF shares. Looking at the S&P 500 tracking funds as an example, SPY has a higher expense ratio than VOO, and is also more liquid in the cash market, making it the preferred choice for short sellers. That preference is clearly expressed in the comparison of short balances, where SPY currently has over $50bn, more than 100x the short balances in VOO.

The continued proliferation of exchange traded products shows no sign of stopping, both in terms of AUM and product count. The Q4 sell-off has only reduced AUM to the level observed in Q2 and is still 5% above Q4 2017. As far as product count, there are now over eight thousand exchange traded products, with more than a thousand new entrants over the last 12 months. Holders of these products continue to see increasing total revenues and the increasing utilization means that returns to portfolios in lending programs are also increasing as a percentage of assets.

We are excited to announce that Financial Risk Analytics has won both the ‘Market Risk (Buy Side)’ and ‘Model Valid… https://t.co/wD39KL5HKN