The economic impact of the coronavirus disease 2019 (COVID-19) pandemic has undermined the ability of companies and governments to meet their contractual obligations around the world, given a variety of factors such as contractions in export demand, supply chain disruptions, and the disruptive effects of social distancing requirements. The risk of non-payment for contract or trade-related loans can be especially acute in emerging and frontier markets, with IHS Markit downgrading the sovereign ratings of 88 countries during 2020, particularly in Latin America and sub-Saharan Africa. Below the sovereign level, the risk is highly uneven across commercial sectors, given the variegated impact of COVID-19, but also because of payment-related issues that pre-date the pandemic.

To better estimate and compare the risk of non-payment across commercial sectors in emerging and frontier markets, we developed an index that incorporates four key components. 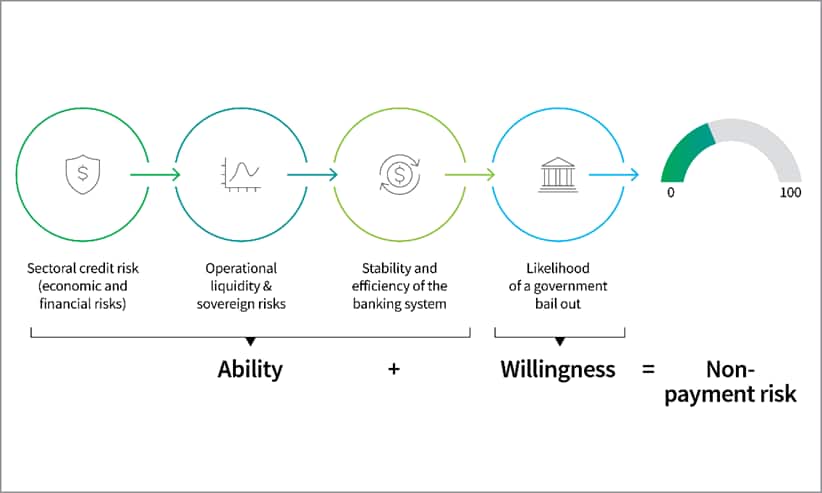 Taking these weighted components together, we produce an overall numerical non-payment risk index, which is comparable across the 17 sectors and 39 economies currently covered in our dataset.

The COVID-19 pandemic has evidently had a profound effect on non-payment risk across all countries and sectors, with nearly all sectors shifting up from the 'Moderate' risk band to the 'High' risk band according to our estimates.

However, some industries have proven to be more resilient to the impact of COVID-19 than others. We estimate that agriculture has seen the lowest increase in non-payments, stemming from the continuity of agricultural supply chains and strong demand for agricultural goods and soft commodities, supported by exchange rate weakness boosting export performance in some regions (e.g. Latin America). Similarly, telecommunications do not appear to have experienced the same degree of disruption caused by social distancing requirements as has been the case in the hospitality and leisure sectors.

COVID-19 is not the only factor driving non-payment risks. The variation in risk across regions reflects the country and sector-specific factors that pre-date the pandemic's onset. By far the greatest variation in risk is found in Latin America. Despite a comparatively lower regional average, there are several notable outliers, such as Venezuela, Ecuador, and Argentina, with the region being the worst affected by sovereign rating downgrades in Q4 2020: a total of 13 sovereigns. Conversely, we estimate that sectors in Africa will experience the highest risk of non-payment of average, yet countries are more tightly clustered around this average and trend towards the lower quartile.

This variation in part stems from sector-specific risks in particular regions. Notably, the electricity utility sector started from a comparatively higher risk level prior to the pandemic, particularly in Africa. This stems from several factors, such as the legacy of unaffordable electricity offtake arrangements and the role of government interference through the use of price controls and subsidies to protect consumers. By contrast, the construction sector started at a lower risk level but was comparatively less resilient to the impact of COVID-19.

A common factor in emerging and frontier markets where governments are facing more severe fiscal constraints is the willingness to pay, based on which sectors are considered to be a priority, the government's responsiveness to the needs of companies operating in them, and the degree of undue political interference. We consider these factors in the following two case studies.

Since 2015, Brazil's main construction companies have gone either into receivership or closed for business; the same happened with shipbuilders, which in 2014 totaled 40, but have dwindled to just eight, as work orders dried out. This has been due to a combination of several politically induced factors, ranging from industrial policy, undue support for national champions, excessive dependence on a single company, to building up of unsustainable levels of debt to a major bribery scheme, known as Lava Jato. The latter, which included corporate executives and top politicians, led to criminal prosecutions, cancelation of contracts, and withdrawal of credit lines by both public and private banks. Brazil's fiscal crisis and the significant reputational risk posed by Lava Jato meant that the state was unwilling to bail out the companies involved.

In the year to June 2020, Kenya's main power company faced an after-tax loss of USD8.6 million (despite a tax credit of around USD56 million), driven particularly by 'Take or Pay' contracts that include fixed charges paid to producers even if power is not dispatched. The government is unlikely to support a substantial increase in electricity consumption charges because it would reduce public support ahead of a planned constitutional referendum in June. Instead, the government is likely to support management's plan to renegotiate PPAs that improve its fiscal position, having previously allowed the parastatal to run up arrears and debts. The International Monetary Fund (IMF) reached a staff-level agreement on 15 February on a new USD2.4-billion credit facility with Kenya, which is likely to stipulate the declaration of parastatal debt on the sovereign balance sheet. This is likely to increase government responsiveness to the needs of the power company, particularly limiting its debt accrual. Renegotiations will reportedly focus on reducing capacity charges rather than scrapping the charges entirely. Foreign investors remain able to use international arbitration courts, a right enshrined in the Kenyan constitution, to contest these changes.