Equatorial Guinea: A tale of too much gas?

The future of the Equatorial Guinean (EG) LNG facility on Bioko Island seemed in doubt over 2018, however into 2019 there has been a reversal of fortune. In the near-term, feedstock stability has been secured with the recent final investment decision (FID) taken for the Alen Gas Hub. The development of the Alen Gas Hub has unlocked further potential gas supply in and around Blocks O & I. The development of these reserves is however uncertain given recent announcements from the government of a potential tieback of the re-invigorated Fortuna project. Consequently, the EG LNG facility is now awash with potential medium to long-term feedstock options.

The EG LNG plant, located offshore, north of Bioko Island, is currently supplied from a single field, Alba, whose production is forecasted to begin to decline in 2020 - 2021. To support continued supply to the liquefaction facility, Marathon Oil, the plant's operator, has agreed with the government to process third-party resources and is seeking to secure further feedstock supply. As part of this, additional supply was secured in April 2019, with an agreement signed between Noble Energy and the government of Equatorial Guinea for supply from the Alen field. The Alen field has been producing condensate since 2013 with gas injection utilized for pressure maintenance. Noble Energy has decided to commercialize the gas and is aiming to begin gas production in 2021. The project took FID in April 2019 and the contract for the construction of the 950 million standard cubic feet per day (MMscf/d) export pipeline to EG LNG was awarded to Saipem. This will help maintain feedstock to the EG LNG facility until the mid-2020s but longer-term supply stability is still uncertain. 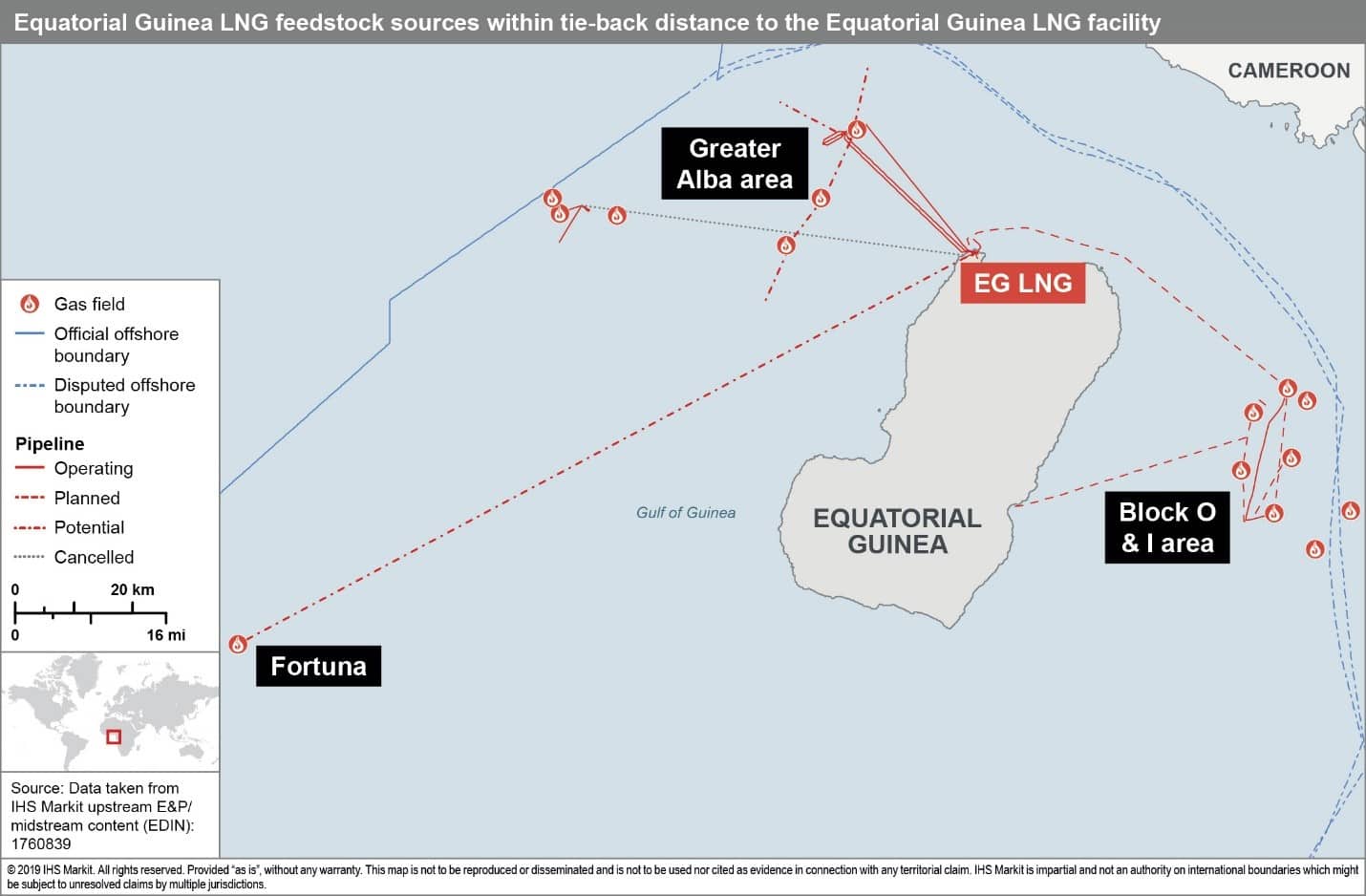 The large capacity gas export pipeline between the Alen facilities and EG LNG had aimed to support the commercialization of further gas reserves from Block O & I. This includes the Aseng, Diega, Felicita, Carmen and Carla fields. All fields are within 5 to 10kms of the Alen production facility and can be developed utilizing low cost tieback scenarios. Combined, the gas reserves from Block O&I could sustain production through to the early 2030s, should they be brought on stream in the mid-2020s, once spare capacity is available. The Aseng field has been producing oil since 2011 with gas injection for pressure maintenance. For gas to be produced, minimal to no drilling will be required as existing wells can be converted into gas producers. Diega, Felicita and Carmen are currently under appraisal, with further studies required to define the best development scenario. These assets have robust forecasted economics of approximately 1.5 USD per thousand standard cubic feet in IHS Markit Vantage. Their economics could further improve through operational and cost synergies if field developments were combined.

An additional source of gas could be supplied by the Yoyo/Yolanda field which is located 15 kms east of Blocks 0 & I, straddling the border between Equatorial Guinea and Cameroon. The two governments are currently negotiating a joint development of the two fields. The government of Equatorial Guinea is said to be aiming for a joint development whereby gas will be exported to the EG LNG and condensate to a local refinery in Cameroon. The planned Alen export pipeline has sufficient capacity to support supply from both Blocks O & I as well as from Yoyo/Yolanda.

Another area which has the potential to supply feedstock gas to the EG LNG plant is the Greater Alba area and associated blocks. These blocks are hosts to the Langosta, Gardenia, Agate, Bococo, Estrella and Luba East fields. All fields are small to medium size discoveries, some of which are under appraisal. Combined, the gas reserves of these fields are estimated to be between 500 and 650 Bscf. All of these fields are within a short tie-back distance from the nearby Alba platform, from which production could be exported via the existing Alba trunk line to EG LNG. All six fields are estimated to have marginal economics as standalone developments but could be improved substantially, if developed together.

Fortuna and the potential competition for processing capacity

While there seems to be sufficient long-term future feedstock for the single train liquefaction facility at EG LNG, recent Government announcements have indicated that the newly invigorated Fortuna development could also be developed as a tieback to the EG LNG facility. The Fortuna project, located in Block EG-27 (previously Block R), was awarded to Lukoil during the 2019 Equatorial Guinea Bid Round. Fortuna was originally operated by Ophir up until December 2018. The government refused to extend the producing contract following the failure of the company to secure project funding. Ophir had previously announced the plan to develop the field utilizing FLNG technologies, however, the development had been stalled for years due to the fields stranded location and the lack of financing for the project. Although historically delayed, indications from the new operator are that the development concept for Fortuna may be finalized in early 2020. If developed as a tieback, the project faces both technical and financial challenges. The ultra-deep waters plus high maintenance and inspection cost required to keep the 140km long pipeline operational could limit the economic viability of the development as a tieback project.

In recognition of Equatorial Guinea's gas potential, a strategic partnership and cooperation agreement was signed between the Equatorial Guinea government and Vitol group in late 2019. It is aimed at developing a gas megahub on Bioko island in the vicinity of the EG LNG plant. Information in the public domain indicates the construction of several offshore gas processing centres. The most preferable development would be an additional LNG train at EG LNG to allow for the simultaneous development of both the Fortuna and Block I & O reserves. Given the current oversupplied global LNG market this is unlikely to take place in the 2020s. Consequently, the development of Fortuna and reserves in and around Block O & I are possibly in direct competition to secure medium to long-term capacity at the EG LNG facility.

Rebekah Bostan, Africa Regional Lead Vantage, is an expert in supply and demand fundamentals, in particular in relation to upstream asset evaluation and economics at IHS Markit.
Ismini Katsimpardi is a Senior Technical Analyst focusing on the valuation of upstream assets in Africa at IHS Markit.