In July 2020 reports in the press indicated that ENI plans to divest operated assets in Congo. ENI is not the only company to have announced an asset divestment plan following significant oil price reductions, reduced global oil and gas demand due to COVID-19 and rising stakeholder pressure to decarbonize portfolios. This announcement coincides with ENI's 2020 CAPEX reduction of ~35% (relative to the initial budget), the July 2020 downward revision of the company's post-2023 Brent oil price assumption (from $70/bbl to $60/bbl) and ENI's continued commitment to the energy transition. In order to achieve more agile, lower carbon, advantage barrels the company will need to increase the efficiency of their oil production operations and minimise gas flaring, whilst re-focusing on lower carbon energy sources, including gas monetisation. The presence of large volumes of gas with limited commercialisations options is a challenge to ENI's operated Congolese portfolio, potentially increasing the carbon intensity of the portfolio if increased gas flaring is required. Divesting from potentially higher carbon assets, such as those in Congo, will allow ENI to achieve a more sustainable and lower carbon portfolio, and also lower future CAPEX and OPEX costs. Any company that takes on this potential farm-in opportunity will have access to relatively robust existing and future oil production but must be willing to solve the gas commercialisation conundrum, or if not be willing to accept a higher carbon portfolio. 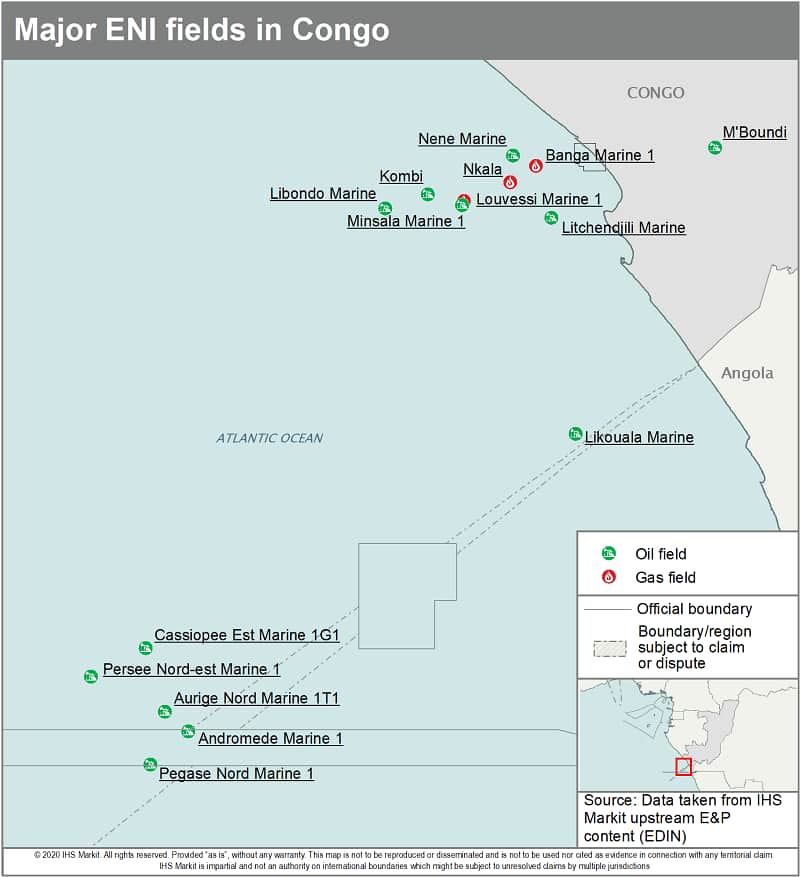 Robust existing production could support an easy farm in opportunity

ENI is currently active both onshore and offshore Congo and recently acquired further exploration acreage. ENI operates more than 50% of Congolese reserves, which include the large Nene Marine and Litchendjili fields. Currently, 80% of their operated production comes from offshore assets with break-even prices estimated within Vantage in the range of $25/barrel. With mature production in decline the development of the multi-phase and low cost Litchendjili and Nene Marine fields are key to maintain production levels in the near term. Looking further out the timeline for the development of other ENI operated discoveries is uncertain creating a real risk of production decline beginning in the late-2020s.

The Nene Marine field, in which ENI holds a 65% operated working interest, is a multi-phase development with Phase 1, Phase 2a and Phase 2b already online. The field is expected to be the largest source of production in Congo over 2020. Phase 2b came on stream in 2020 and is expected to boost gross production to over 25 thousand barrels of oil equivalent per day (boe/d). This third stage in the field's development is also due to include gas commercialisation, but the final volumes to be developed are currently unclear. A final fourth stage, Nene Marine Phase 3, is planned with an expected start date in the early to mid-2020's, which will further boost production to over 50,000 barrels of oil per day (bo/d). Results from Vantage indicate that Nene Marine Phase 3 is expected to require a capital investment of USD 655 million to develop the remaining 240 million barrels of oil equivalent (MMboe) of oil and gas reserves. This phase is likely to have a healthy break-even price (BEP) of around $30/barrels but has significant gas reserves. Gas commercialisation from Phase 3 is currently unclear given the limited domestic Congolese market and there is significant risk of gas flaring unless further gas offtake contracts are secured. This may prove a challenge for any farm in partner.

The Litchendjili Marine field, in which Eni has a 65% operated interest, is one of the largest fields in ENI's portfolio in Congo. A phased approach has also been adopted for the development of the field. Phase 1 focused on the production of the gas reserves and was brough on stream in 2015 underpinned by gas offtake agreements with both the Central Electrique due Congo (CEC) and the Centrale Électrique du Djéno (CED). Gas and condensate are transported onshore to the Djeno gas processing plant and from there the gas is used as feedstock to the various gas to power plants. Phase 2 will focus at producing a small part of the remaining oil reserves of the field. A final investment decision (FID) has yet to be made and a start date in the early 2020s is currently unlikely. Oil will be produced through the existing unmanned platform and from there it will be sent onshore to the Djeno Oil Terminal.

Phase 3 of the Litchendjili Marine field is estimated to hold approximately 800 MMboe of 2P reserves and will tie into the existing field infrastructure. This phase is expected to have a production capacity of more than 60,000 bo/d and a BEP less than $20/barrel. The project is aiming at primarily developing the remaining oil reserves of the field, with the associated gas reserves providing substantial potential additional value to this last phase in the development of the Litchendjili asset. This is a low risk investment from a subsurface and technical perspective, but the large volumes of associated gas may be a challenge to develop, given the limited domestic Congolese gas market. This may delay out any development of this final development phase of the field.

Excluding the future planned development of the Nene Marine and Litchendjili fields there is approximately 2 billion barrels of oil equivalent (Bboe) of gross undeveloped operated resources, of which more than 800 MMboe are gas resources. Given the large gas resource present commercialising any associated and non-associated gas production will be key to lower the overall carbon intensity of the future portfolio. This will be a challenge given the small existing domestic gas market and the limited increase expected in domestic gas utilization Developing the remaining gas reserves from Marine XII could possibly be undertaken via a liquified natural gas (LNG) plant or a floating LNG (FLNG) facility, but given the current oversupplied gas market this is unlikely to take place in the near term.

The largest undeveloped project in the ENI portfolio is the Minsala/Louvessi Marine oil asset (Eni 65% interest). Limited appraisal drilling has taken place to date and commercialising the associated gas production will be a challenge and could limit any near-term development. A fact reinforced by ENI in 2020 which has indicated that an FID timeline is likely anywhere between 2023 and 2030. Should the field be developed in the late 2020's, and include gas commercialisation, results from Vantage indicate that this would provide a strong net present value (NPV) of 650 million USD at a $60/barrel oil price due to a break-even of under $20/barrel. Farming into this asset would provide a company with advantage barrels if they are willing to accept a higher carbon emission level due to potential gas flaring.

The challenge of gas commercialisation could potentially be solved with the development of an FLNG facility which will use as feedstock gas from the fields within the Marine XII block. The fields are located in close proximity and it is estimated that they hold a total of over 2.5 trillion cubic feet per day (Tcf) of associated and non-associated gas reserves not including the undeveloped Litchendjili gas reserves. Should a combined development be agreed, asset value could be fully realised with the development of both oil and gas reserves within the block while the minimisation of gas flaring will lead to low-carbon operations.