Energy storage will play a critical role in supporting network reinforcement, but business case will rely on additional value streams

As renewable penetration increases, transmission and distribution (T&D) infrastructure will require significant reinforcement. Battery energy storage is becoming a keyalternative to traditional ways of reinforcing network infrastructure because it is fast to deploy, can provide multiple services, and often comes at a lower capital cost.

Countries across the globe are at various stages of transitioning from a predominately dispatchable, spinning thermal generation which has naturally provided grids with inertia, to renewable generation which provides an inherently variable output. This variability creates challenges in pairing peak generation with peak demand and ensuring reliable power at all times. At a local level, when an area becomes saturated with behind-the-meter solar there can be issues with power back-feeding to local substations, which can damage the network infrastructure. In addition, lines can become congested, limiting the amount of power that can be exported and often leading to energy being curtailed.

Energy storage can solve many of these issues, however, balancing power generation with demand and balancing frequency are managed through system wide services procured on an ongoing basis, rather than being addressed by network infrastructure. Instead, a network operator or utility is most commonly interested in utilizing energy storage for managing congestion, helping to mitigate outages and providing voltage support. Deferring network investment is certainly a potential benefit to network operators but is not a service that a battery provides on an ongoing basis. Also, to note, providing capacity is not considered a network enhancement service but rather a generation support service so is not considered here.

According to the latest forecasts, IHS Markit predicts that 5.4 GW of battery energy storage will be installed for T&D enhancement between 2020 and 2025, however the services that a T&D enhancing ESS will provide is influenced by location of the system, local regulation and conditions of the network. 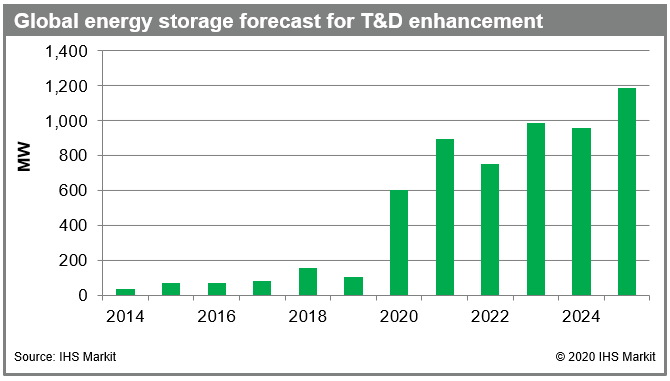 As early as 2008, utilities in the United States utilized energy storage as a non-wire alternative (NWA) to traditional network reinforcement. Utilities are increasingly recognising the economic benefits of using ESS to manage congestion, mitigate outages, shave peaks and these same systems are increasingly being able to trade energy in wholesale markets and providing frequency regulation, in order to generate additional revenues.

Historically, ESS providing T&D enhancement in Europe has been dominated by demonstration projects. Terna - the TSO for Italy - in 2014 and currently RTE - TSO for France - are testing three 10-12 MW projects in their respective countries are just some of the more prominent examples. The requirement to unbundle vertically integrated energy services (requested by Directive 2009/72/EC and 2009/73/EC of the European Union) restricts the ability of both transmission and distribution system operators (TSOs and DSOs) from owning and operating ESS in Europe. Network operators can seek exemption when specific criteria is met, however, such exemptions often come with limitations on what the systems can do and for how long. Instead, network operators are creating new markets for third party operators of ESS to bid into to provide these system services.

A growing market for T&D enhancement is Australia as a result of its dispersed population, a harsh environment and an aging infrastructure that is installing renewable generation at a rapid pace. Western Power - a network operator in Western Australia - is leading the way in utilising ESS in fringe-of-the-grid locations in place of traditional network infrastructure. Not only is it installing solar plus storage systems behind-the-meter (BTM) in place of new lines but also pioneering innovative community battery storage systems that provide local residents the opportunity to purchase space in the system to store their solar power.

Energy storage is a critical asset for supporting network reinforcement, but will rely on additional value streams

Globally, there is a trend towards network operators outsourcing the operations of the energy storage system (ESS) to a third party. In some markets this will be to comply with unbundling requirements, for vertically integrated utilities it will be in order to make use of the expertise of a third party. Additionally, these T&D enhancement services are increasingly becoming only a part of the value stack, providing frequency regulation or arbitraging energy in wholesale markets is commonly provided by the same system. The portion of the cost that the network operator or utility, therefore, has to cover reduces, which makes these systems highly cost efficient for network operators. It is also important to not forget that behind-the-meter (BTM) ESS can also support the grid by participating in demand management programs and local flexibility markets.

Oliver Forsyth is a research analyst at IHS Markit.