While Russian natural gas continues to flow via Ukraine to Europe as of 1 March 2022, it seems clear that the invasion of Ukraine by the Russian military will cause many European countries to look urgently for new gas supply sources. Particularly as the risk of an interruption in flows has increased, which would in turn impact other European states.

The map below from the Midstream Infrastructure and Markets Database - which details transportation, processing and primary market facilities along the natural gas and oil value chains - illustrates the significance of Russian gas pipeline infrastructure supplying Central and Eastern Europe. As of February 2022, a full cutoff of Russian gas supplies through these transit routes would imply a supply loss equivalent to 30% of European gas demand. 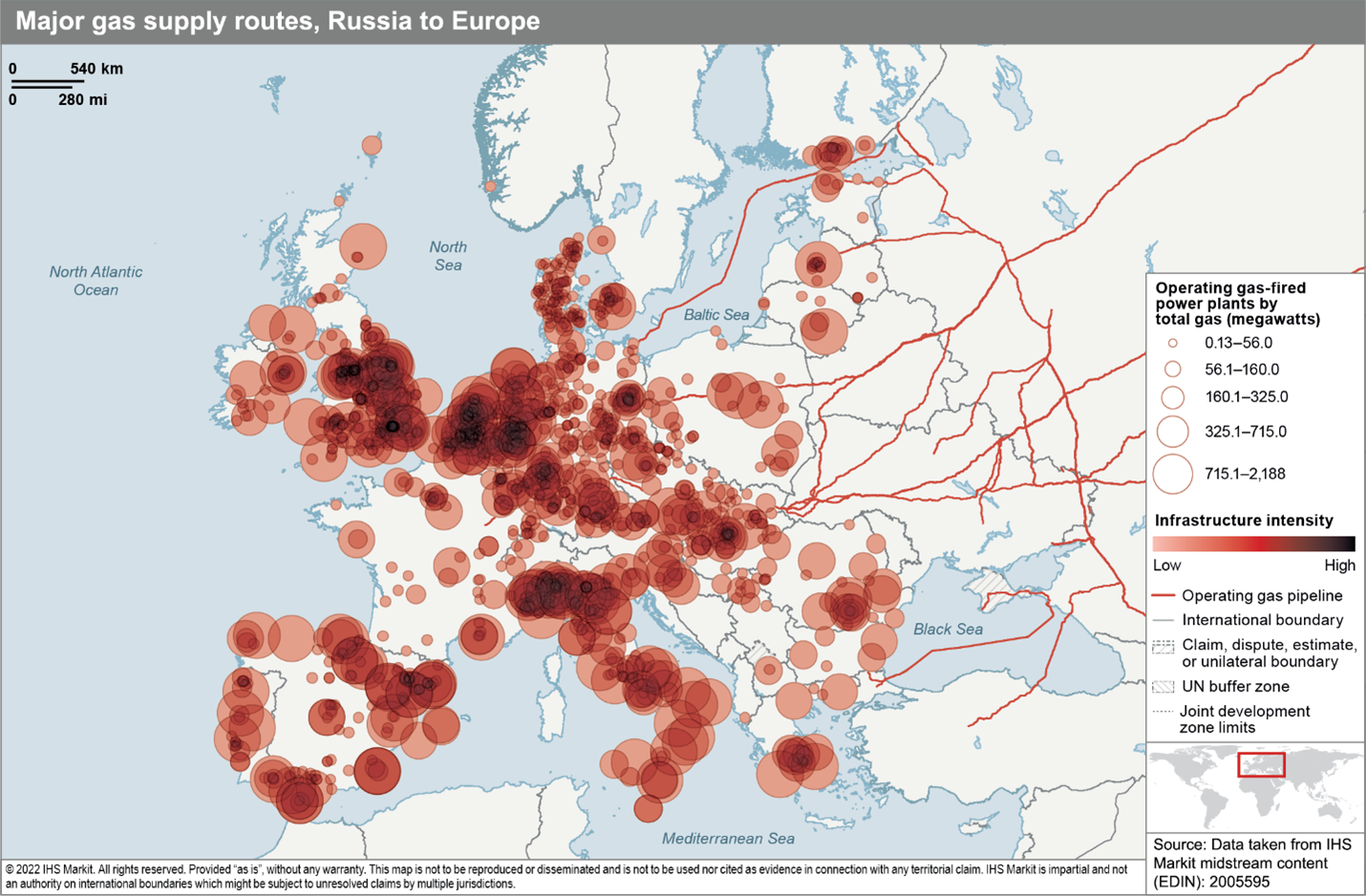 European countries are not all reliant on Russian gas to the same extent. Spain primarily uses Liquefied Natural Gas (LNG) - imported from many countries including Russia - and imported pipeline gas from Algeria. Sweden is not a major gas consumer although many states in central and eastern Europe remain heavily dependent, having inherited the former Soviet gas pipeline system upon independence.

Geopolitical concern over reliance on Russian gas have driven states like Poland, Lithuania, Estonia and Finland to pursue supply diversification for many years. As the map below shows, LNG regasification terminals have been built, allowing gas imports from new markets. New interconnector pipelines have been constructed boosting internal flexibility to redistribute supplies. The Southern Gas Corridor - Trans-Adriatic Gas Pipeline - put onstream in December 2020 has allowed Azerbaijan to become a new supplier to southern Europe via Turkey. These strategic efforts to improve supply diversify will now intensify. 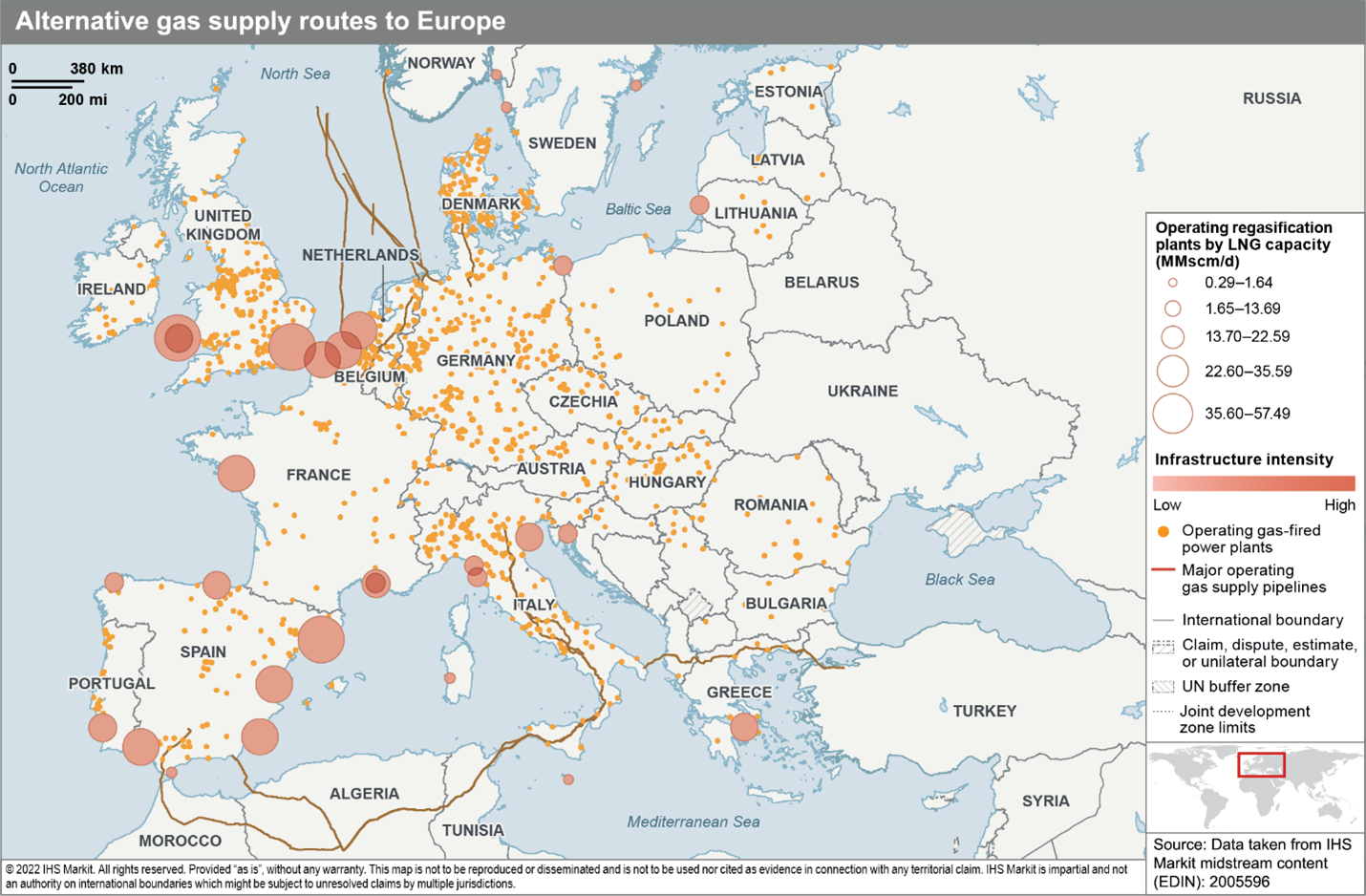 European states which did not share the same geopolitical concerns about importing Russian gas are now urgently re-evaluating their positions with a focus on security of supply. Germany is the largest gas market in Europe and in 2021 imported around 45% of its total gas imports from Russia. Germany has suspended certification of the Nord Stream 2 gas pipelines - potentially complicating efforts to meet incremental winter heating demand for the 2022/2023 heating season - and Chancellor Olaf Scholz stated on the 27 February 2022 that Germany would now seek to reduce reliance on Russian gas. 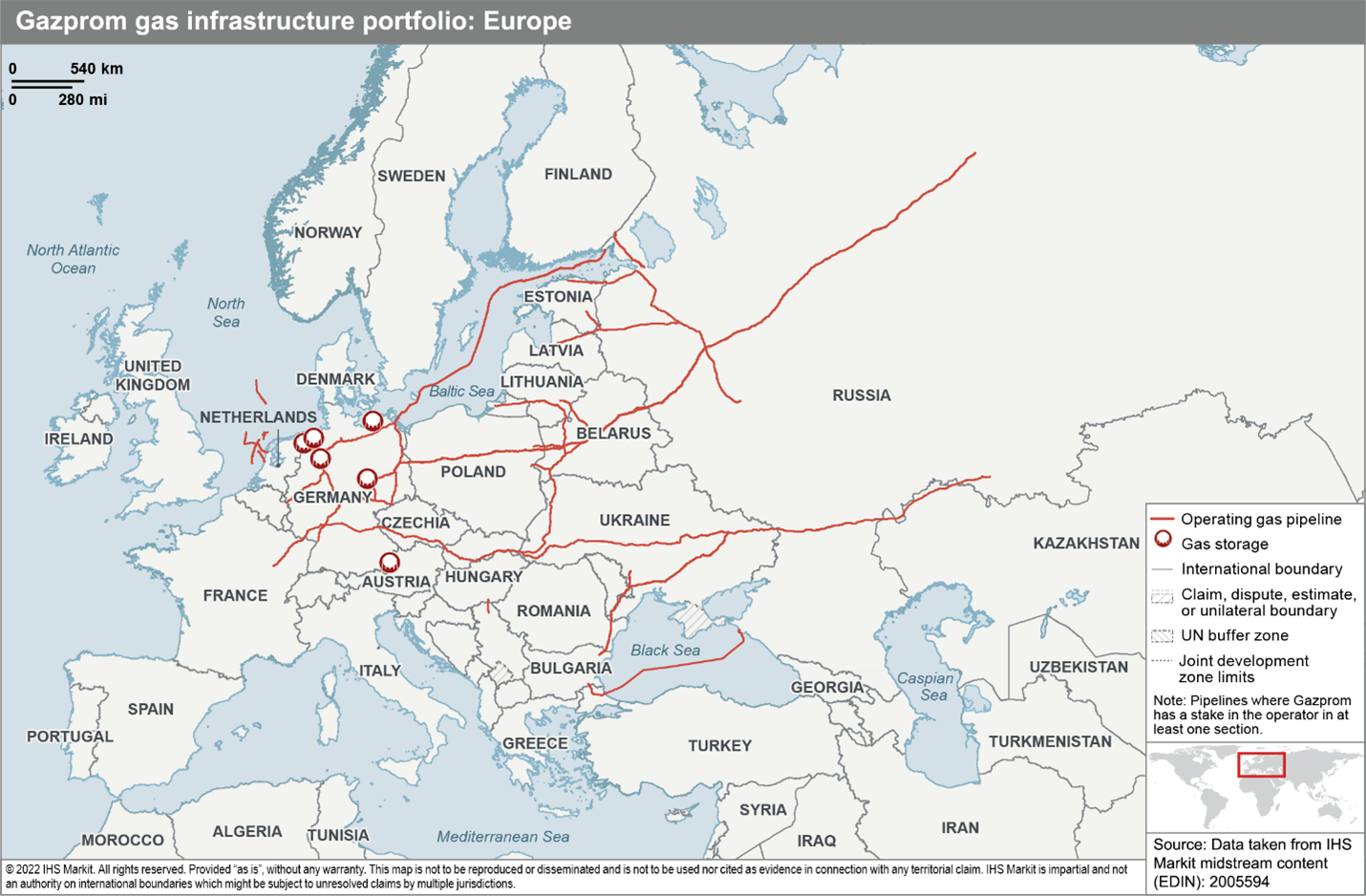 Deteriorating relations and worries about a potential supply cut-off will mean Europe will likely ramp up LNG and alternative pipeline imports, delay closures of power plants not using Russian gas or bring others out of mothballs while drawing on gas storage reserves. There may be political pressure to complete supply or interconnector projects like the Gas Interconnection Poland Lithuania (GIPL) pipeline between Poland and Lithuania or Baltic Pipe, transporting Norwegian gas via Denmark to Poland. Lithuanian grid operator already announced that GIPL will operate at partial capacity from 1st May 2022 before becoming fully operational from the 1st October 2022.

Longer term, a sharp pivot away from Russian gas could provide further investment impetus and policy support for alternatives to natural gas, including green hydrogen, which can be produced using water and renewable electricity produced in Europe.

Learn more about our Midstream research and analysis.