On January 8th, 2018 Eastman Kodak Co shares closed at $3.10, their value having declined by 80% over the preceding 12 months. Over the next two days, the shares more than tripled in value, closing January 10th at $10.7; insufficient to offset the losses over the prior year, but a boon for long investors, nonetheless. The cause of the about-face was the announcement of KodakCoin, a partnership the firm was forming to develop a blockchain cryptocurrency solution for payments to photograph rights holders.

A tripling will cause problems for short sellers. The pain of the unrealized loss is compounded by the lossmaking position having grown in nominal terms and as a percentage of the (now smaller) portfolio. For the prospective short seller, however, a tripling may be a most welcome entry point, as was the case in for KODK shorts in January 2018. The short interest reported by NYSE for Dec 29th, 2017, the most recently reported as of Jan 10th, stood at 3.2m shares. The Jan 12th short interest would later be reported as 12.2m shares, a 276% increase. 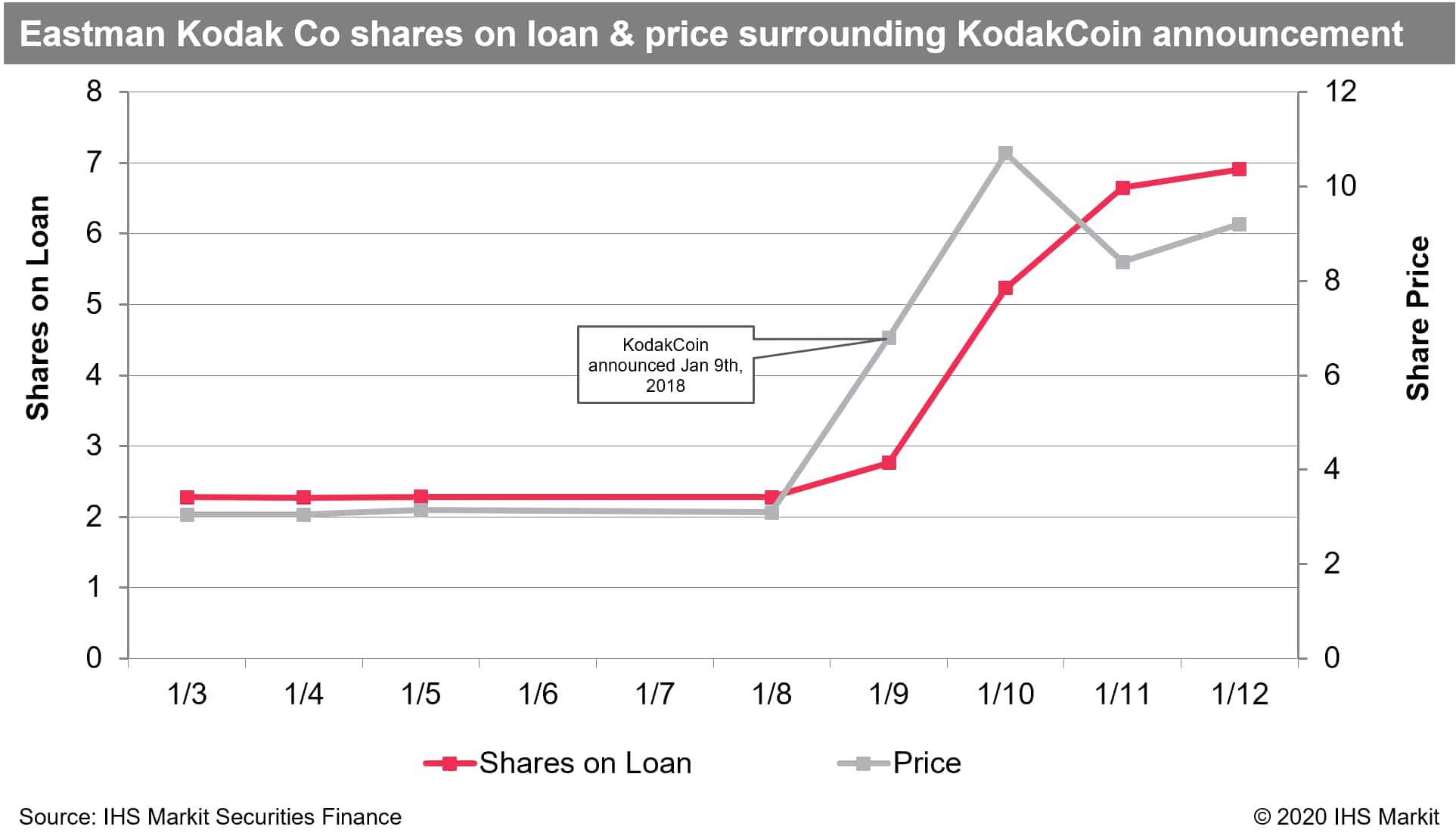 On January 10th the number of borrowed shares reported to IHS Markit more than doubled to 5.2m shares, while the fee for new borrows increased from < 50bps to more than 5,000bps. The increase in borrow fee was published intraday on January 10th and the net increase in shares on loan reported the next day on January 11th. The January 12th NYSE short interest number was not published until January 25th, by which time the shares price, shares on loan and borrow fee were all in decline from the January 22nd peak. By August of 2018, the KODK share price was back below where it was prior to the KodakCoin announcement.

The same-day spike in borrowing on the day of the KodakCoin announcement highlights a key subtlety in how the data is reported. The short interest data published by the exchanges is purely tied to settlement date, so the January 12th short interest number pertained to trading on January 10th. The securities finance data will function similarly, in that changes in borrowing will usually reflect changes in the settlement needs for that night, i.e. Trade date +2; however, Kodak provides an important caveat. While broker-dealers generally borrow shares for today's settlement needs, they are also managing an internal long supply of shares which they may lend out to their own clients or other brokers. If a broker had rehypothecated KODK shares prior to the KodakCoin announcement the combination of soaring volume and volatility, increased locate requests and surging borrow cost may have compelled the broker to borrow in shares today to cover the existing short position, suspecting that the long position may be sold and marginal borrow may be even harder to come by tomorrow so getting ahead of today's locate requests may be worth doing anyway.

Shifting forward by just over 2 years, amid the 2020 COVID crash, the KODK share price closed at $1.55 on March 23rd, the lowest point since the firm went public via an IPO in 2013 (as a result of bankruptcy reorganization). The KODK share price subsequently recovered along with the broader market, increasing by 35% from the low close in March to the close on Friday, July 24th. The following Monday, July 27th, the share price increased by 25% with no obvious catalyst. On Tuesday, July 28th, Kodak announced via a press release that they would be receiving a loan from the US government to develop capabilities as a provider of discount generic drug materials. In reaction to the news the share price increased by just over 200% to close at $7.9 (the highest closing price since January 31st, 2018). 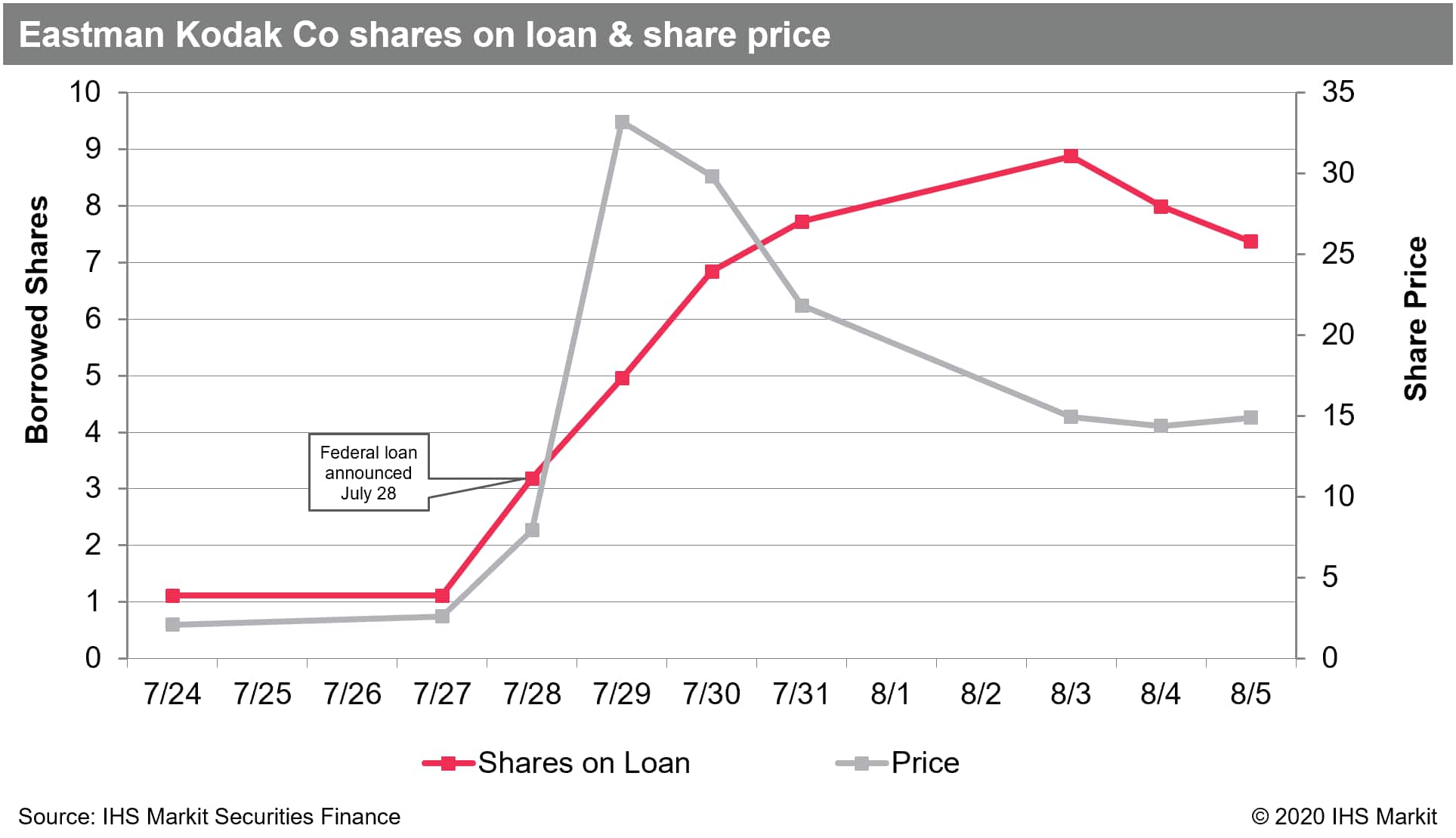 Like the January 2018 episode, the rapid ascent in share price was painful to existing shorts; the 1.7m in short positions (reported by NYSE as-of July 15th), increased in value by an estimated $3.5m on July 24th to $56m at the peak. Also echoing 2018, short sellers immediately added to outstanding short positions, both on the 28th and over the next week as the share peaked on the 29th and started to descend, reaching 8.9m shares on August 3rd. The July 31st NYSE short interest was published on August 11th at 8.6m shares. The borrow fee peaked at 16,000bps (an annualized rate of 160%) on August 30th and subsequently declined with the number shares on loan; new borrows were back under 2,000bps on August 13th.

"You Press the Button, We Do the Rest" so said an early slogan for Kodak, in 1888. That phrase would work as well for brokerage firms in 2020, given the surge equity trading activity. The outperformance of hard to borrow US equities starting in April exceeds even the rally from the depths of the GFC in early 2009, with filing for bankruptcy appearing temporarily to be a positive catalyst. The resurgence of Eastman Kodak Co fits perfectly into the broader narrative, however specific risks exist for investors on the long and short side. Shares of KODK closed on August 13th at $9.2, down 72% from the peak close on July 29th, though still up 338% from the close on July 24th. Shares on loan have decreased by 1.9m shares since August 3rd, suggesting some short sellers are pocketing gains, while most short sellers who entered positions after the loan-announcement await further developments to cover their positions. In 2018, short sellers were rewarded for maintaining positions after the initial reversal, however little about the short selling in 2020 been grounded in precedent.