Emerging risks in Latin America in 2022

Following a partial regional rebound in 2021 from the COVID-19-induced recession, external demand will be the main driver of growth in 2022. IHS Markit forecasts 4.3% real GDP growth for the world economy and 4.1% for the United States, the primary trading partner of many Latin American countries, implying increased exports along with higher remittances and expanded foreign direct investment. Although the Omicron variant brings renewed global economic uncertainty, strict lockdowns and mobility restrictions are unlikely in Latin America. 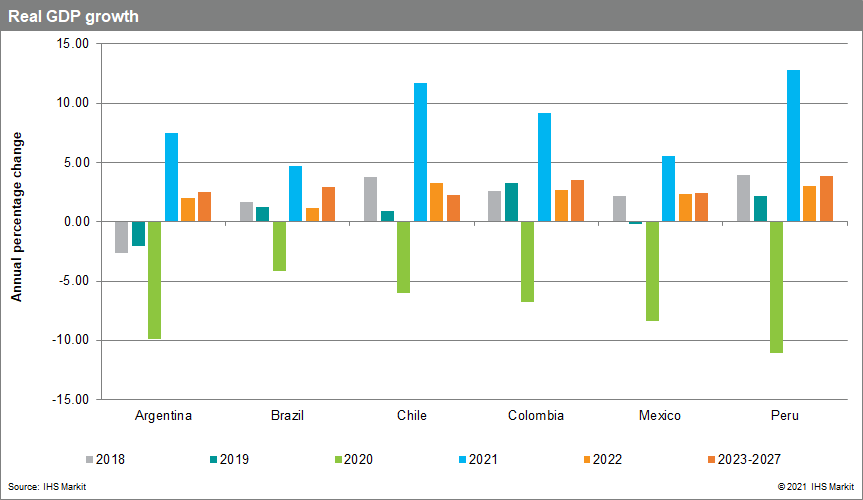 Left-wing parties are well-placed to gain office in Brazil and Colombia, posing a major threat to the business environment.

The leftward shift, already seen in Peru, Bolivia, and Chile in 2021, appears likely to continue this year. A victory for former president Luiz Inácio Lula da Silva would pose significant uncertainty for Brazilian fiscal policy, which remains the country's main challenge given a large structural fiscal deficit and a very high public debt. In Colombia, a victory for Gustavo Petro of the radical left would lead to a hostile stance towards the oil and mining industries, potential reviews of infrastructure contracts, and an expansionary fiscal stance rejecting austerity.

Nonetheless, there should be scope for recovery later in 2022. Politics-driven depreciation may lead to overshoot, and new administrations may moderate their rhetoric to stem currency weakness. The external environment should also remain broadly favorable. 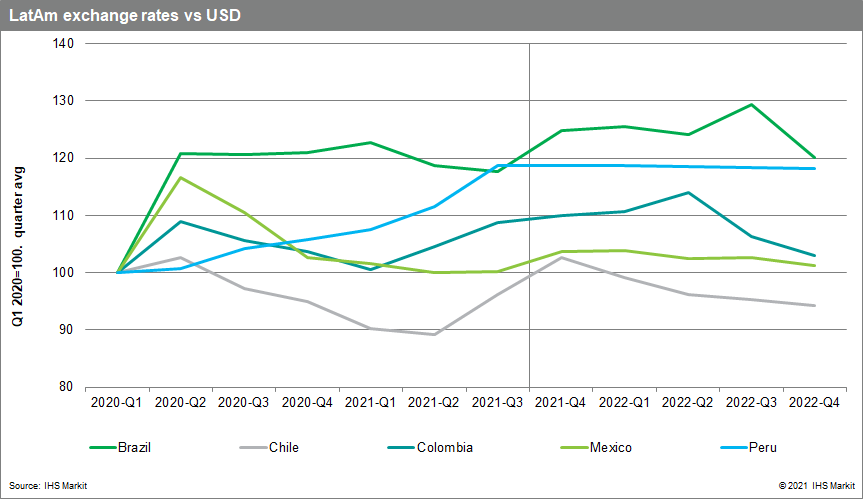 Monetary authorities in Brazil, Peru, Colombia, Mexico, and Chile have increased their policy rates in response to high inflation, reflecting the autonomy they enjoy. In Brazil, inflation reached double digits in September, bringing the most aggressive response from any central bank.

Worryingly, inflation in services is also increasing, implying there have been second-round effects or contagion from commodity-driven inflation. IHS Markit expects oil prices to decline in 2022, reducing external inflationary pressures, but supply chain relief is unlikely before late in the year. Semiconductor import shortages will hurt carmakers in Mexico, Brazil, and Argentina, and Latin American exporters of perishable agriculture goods face shortages and high prices of fertilizers into early 2023. Strikes by truck drivers' associations in Argentina, Brazil, Chile, and Peru are an additional risk. 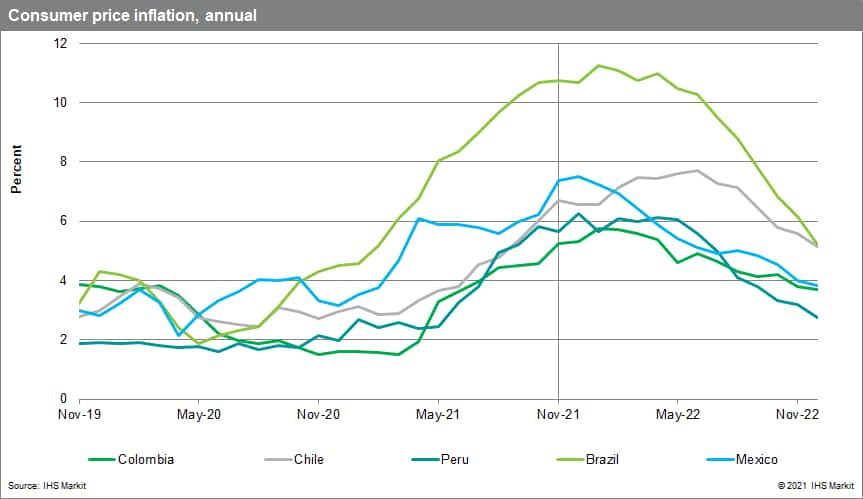 Throughout the pandemic, both small and medium-sized enterprises (SMEs) and nonmortgage consumer debt have been the weakest segments in terms of impairment (as measured by recorded non-performing loans) and for indicators of future deterioration. In Ecuador, Honduras, Panama, and Peru, full impairment in the banking sector is still to be realized, with many loans still benefiting from forbearance. The banking sectors in Mexico, Brazil, and Chile exhibit a healthier position but higher interest rates are likely to lead to increased defaults involving heavily leveraged debtors.

Argentina, which has delayed reaching an agreement with the IMF on rescheduling its existing liabilities, will struggle to meet the Fund's demands for fiscal and monetary restraint given government reluctance to embrace austerity. Political opposition to fiscal reform packages complicate IMF disbursements to Costa Rica and Ecuador, and Fund talks with El Salvador have been jeopardized by the introduction of Bitcoin as legal tender. Pressure on Brazilian and Colombian public finances may worsen following the 2022 elections.

In the context of a growing global ESG focus, Brazilian deforestation creates reputational risk and threatens further delays to the EU-Mercosur trade agreement. In addition, proposed EU carbon tariffs would disproportionately impact Latin America's key sectors, including oil and gas, agribusiness, coal, and cement production. Nonetheless, renewable energy has become the most attractive sector for FDI in Latin America, according to the United Nations Economic Commission for Latin America and the Caribbean, with investment opportunities in Brazil, Chile, and Colombia standing out.