Sub-Saharan African economies have seen growth slow in recent months, with some seeing business conditions deteriorate in October as the region suffers in common with other emerging markets.

Last month we introduced a new series of notes on emerging markets which began by looking at some of those considered most vulnerable at present. One of these was South Africa, and this month we delve deeper into Sub-Saharan Africa to look at how countries in the region are faring.

PMI survey data compiled by IHS Markit show that output growth in the Sub-Saharan African private sector moderated in October, slowing to the weakest in the current 22-month sequence of expansion. This represents a marked turnaround from the strong increases seen earlier in 2018, suggesting that GDP growth across the region will slow from around 3% currently to 2% in the final quarter of the year. 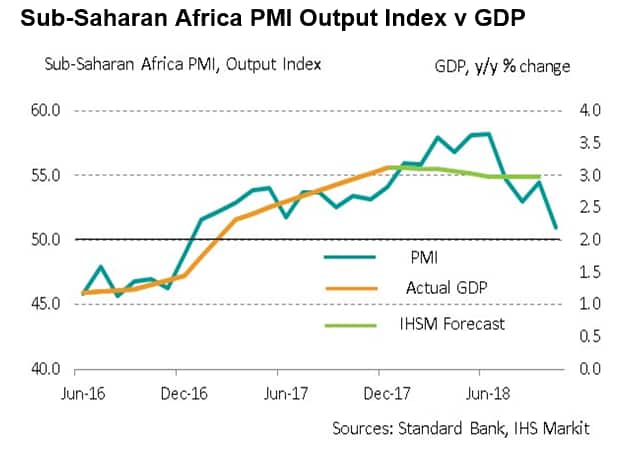 Looking at the individual countries covered by PMI data in the region shows that three nations are currently in contraction territory, including the influential South African economy. Nigeria continued to see output increase, but the rate of expansion slowed. In fact, four of the six monitored economies saw momentum worsen over the quarter, with only Kenya and Uganda seeing growth rates improve. 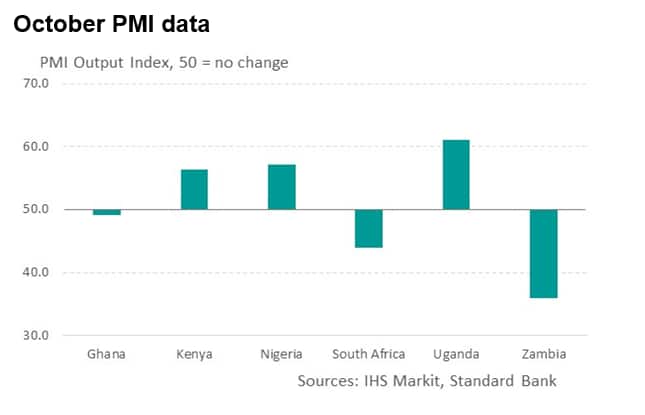 October data pointed to a fourth successive monthly deterioration in business conditions in South Africa, with the rate of contraction the fastest in over four years. Respondents to the survey signalled an ongoing lack of demand. Weakening economic activity and fiscal concerns have put pressure on the South African rand, which has depreciated by around 16% against the US dollar in the year-to-date.

As is so often the case, currency weakness is stoking inflationary pressures. Input cost inflation in South Africa quickened to a 28-month high in October, with average prices charged rising accordingly to the greatest extent since July 2016.

Building inflationary pressures have in fact been seen across Sub-Saharan Africa, with selling prices in the region increasing on average at the fastest pace in almost two years during October.

The strongest rate of selling price inflation in October was in Zambia, where the increase was the sharpest since November 2015. The Zambian kwacha has come under pressure in recent months amid worries about the country's fiscal position, as well as concerns regarding delays in the agreement of a deal with the IMF and the suspension of aid from some international partners. In fact, the currency has depreciated 18% against the dollar since the end of June, by far the worst of the monitored countries. 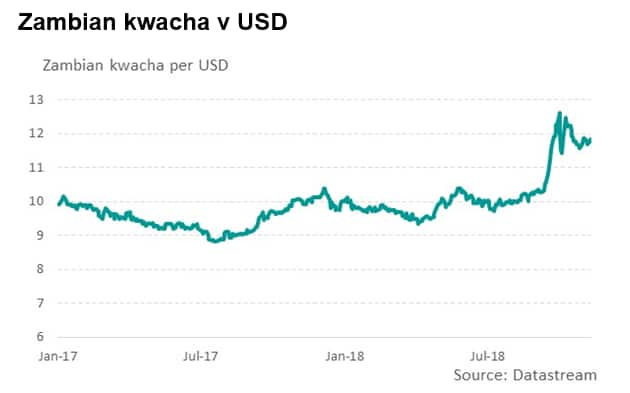 The survey data suggest that the Zambian economy looks to have slipped into a sharp slowdown in recent months, with output decreasing among the surveyed companies for a third month running in October and dropping to the greatest extent since September 2016.

Nigeria remained one of the stronger performers across the Sub-Saharan Africa PMIs during October, seeing a further marked expansion of business activity. The current run of increasing output now extends to almost two years. That said, the rate of growth softened to the slowest in 16 months at the start of the fourth quarter amid reports from companies of weakening demand conditions, in line with the trend seen across much of the region.

Given that Nigeria and South Africa are the dominant economies in Sub-Saharan Africa, any further slowdown in growth in Nigeria could see the region as a whole dip into contraction territory given the problems being faced in South Africa.