The worldwide PMI surveys indicated a solid but uneven start to the fourth quarter for the global economy. Growth accelerated in the US, China, India and Brazil, and Japan's downturn moderated, helping push the global PMI to a 26-month high. However, rising infection rates and renewed lockdown measures were linked to a stalling of business growth in the eurozone, as well as a marked slowing in the UK, when Brexit uncertainty added to the cautious mood.

The headline JPMorgan Global PMI™ (compiled by IHS Markit) rose from 52.5 in September to 53.3 in October, its highest since August 2018. The PMI has now indicated expanding business activity for four successive months, reflecting a rebound in economic activity in the third quarter and at the start of the fourth quarter after the COVID-19 pandemic caused an unprecedented collapse in the second quarter.

In the developed world, it was the relatively subdued services sector that continued to impede the recovery, though developed and emerging markets alike saw exports of services deteriorate further, often reflecting weak demand for travel and tourism amid the ongoing pandemic. 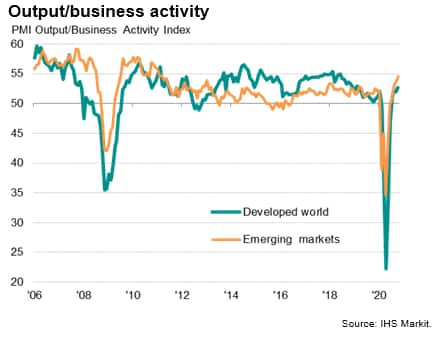 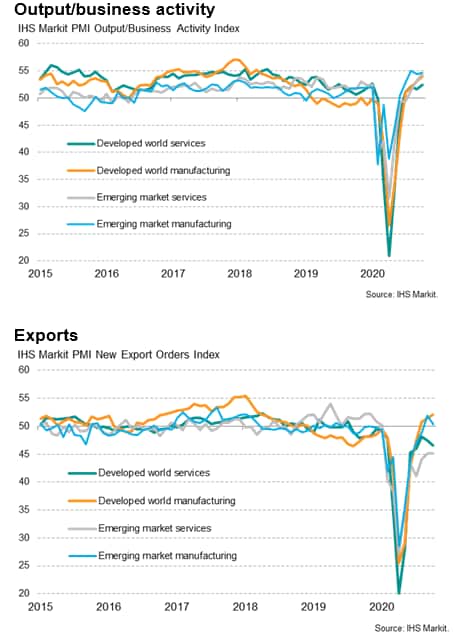 Looking at the largest markets, India - a late arrival to the global recovery - reported the strongest expansion in October, with growth surging to the highest since January 2012. A near-record jump in manufacturing output was accompanied by the first rise in service sector activity since February.

Brazil saw the second-strongest upturn of the 'BRIC' economies, with output registering the largest gain since February 2010. A near-record increase in manufacturing output was complemented by the largest rise in services activity since January.

China's recovery also regained momentum, with growth picking up to the joint-highest since November 2010 on the back of increasingly robust factory output growth and an improved performance of the service sector, where activity rose by the second-fastest for over ten years.

Russia bucked the improving trend, however, with business activity falling back into decline after three months of recovery. Both manufacturing and service sectors reported renewed downturns, linked primarily to rising virus worries. 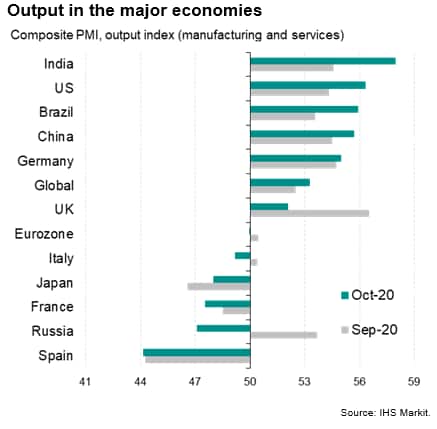 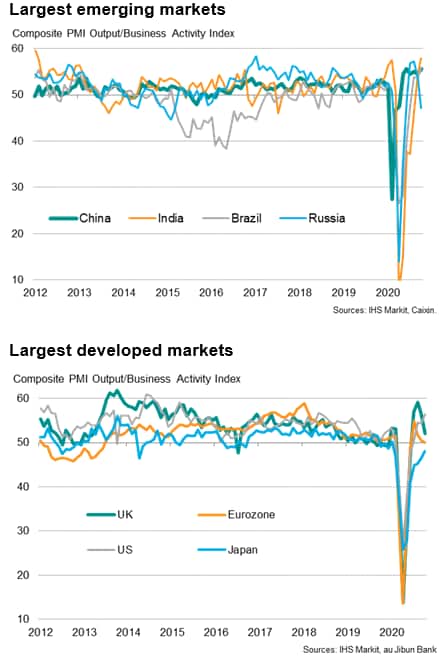 Trends were also mixed among the largest developed markets. Japan remained in decline, albeit recording the smallest contraction since the current downturn began back in February, thanks to a moderating loss of manufacturing output. Services sector activity fell at a decreased rate, however, with exports falling especially sharply.

The eurozone's recovery meanwhile stalled after three months of growth as rising virus containment measures led to an increased rate of loss of service sector output, offsetting an acceleration of factory output growth. Manufacturing production growth hit the highest since February 2018, in turned buoyed in particular by a booming factory sector in Germany.

Growth also slowed sharply in the UK amid rising virus worries and intensifying lockdown measures, easing to the lowest seen over the past four months. Rates of expansion cooled markedly in both manufacturing and services, the latter showed especially modest growth.

The US, in contrast, enjoyed the strongest expansion since May 2018. The upturn was driven by the largest increase in service sector activity since April 2015 (and the biggest gain recorded across all of the largest economies in October) alongside a more modest acceleration of manufacturing growth to an 11-month high.

Looking ahead, the greatest improvement in sentiment was seen in the US, where future business optimism showed a record surge ahead of the elections, pulling prospects for the year ahead up to the highest for two years. Sentiment also improved substantially in China and, to lesser extents, in Japan, India, Spain and Brazil. Business confidence waned, however, in Italy, Russia, Germany and the UK, as well as in the eurozone as a whole. 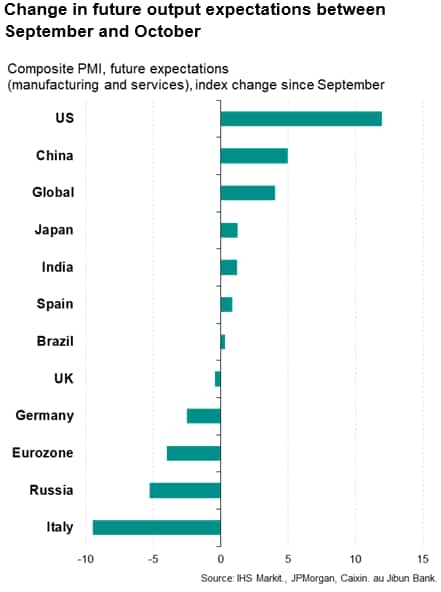 Meanwhile, only in the US and China were jobs added in October. The steepest reduction in headcounts was seen in the UK, where Brexit has added an additional layer of uncertainty for many companies. 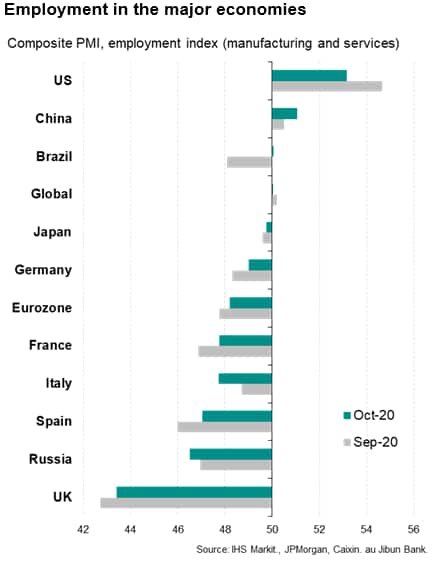 The divergent trends in the PMI data can be explained at least in part by divergent COVID-19 containment measures, which serve to subdue demand for various goods and services.

The weakening of the Eurozone PMI to indicate stagnation, for example, coincided with a ratcheting-up of virus containment measures during the month. The IHS Markit COVID-19 Containment Index for the eurozone rose from 29 in September to 40 in October - its highest since June - as governments sought to quell rising second waves of infections. Similarly, in the UK, where growth slowed sharply, the Containment Index rose from 38 in September to 41 in October. These indices are due to rise further to 60 and 67 for the Eurozone and UK respectively in November, thereby acting as intensifying drags on economic activity.

In the US, in contrast, the Containment Index merely rose from 48 to 49, up just one point in October, and is due to fall to 42 in November based on current government projections.

In China, the Containment Index was just 10 in October, and is set to rise to just 12 in November, posing little threat to the mainland recovery.

Whether these containment measures go to plan clearly remain on government decisions regarding changing virus numbers, but the overall global degree of containment should ease as we head into 2021, helping sustain the overall recovery. However, it's clear that national trends will inevitably vary according to the controls imposed by governments. 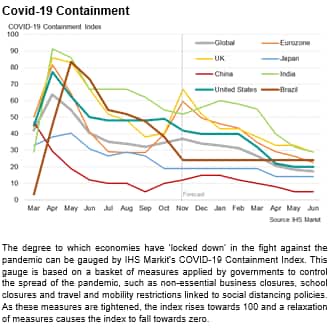