Foreign capital is a vital source of investment and growth for EMDEs. However, dependence on changeable inflows of foreign capital to finance liquidity gaps is also a vulnerability - as briefly demonstrated by the coronavirus disease 2019 (COVID-19) pandemic-induced 'sudden stop'. Strict capital controls generally are used only as a last resort, with governments instead favoring more-investor-friendly forms of intervention given historically low interest rates and continued borrowing by EMDEs. Still, EMDEs are likely to use a variety of tools to manage volatile capital flows that imply different consequences for foreign investors.

With the onset of the COVID-19 pandemic, pressure on local currencies and lost export earnings (particularly in natural resource- and tourism-dependent economies) accelerated across the Latin America and Caribbean, and sub-Saharan Africa regions. Capital inflows did recover from April 2020, stemming from the Organization of Petroleum Exporting Economies plus (OPEC+) agreeing to oil production quotas that supported commodity prices, the US Federal Reserve opening temporary repo facilities to improve liquidity conditions, the rollout of sizeable emergency support programs and liquidity lines by the International Monetary Fund (IMF), and the monetary policy responses undertaken by EMDEs' central banks. Furthermore, the larger economies within Latin America and sub-Saharan Africa entered the 2019-20 commodities downturn and COVID-19 pandemic with larger or similar foreign reserve holdings and more manageable current accounts than previous crisis episodes.

The imposition of COVID-19 pandemic-related restrictions on movement and trade also meant that EMDEs' current account deficits stabilized temporarily or moved into surplus, supporting foreign reserves and increasing external debt repayment capacity. This was particularly the case for non-oil exporting countries such as South Africa and Kenya, whereas oil-dependent economies - for example, Angola and Nigeria - experienced a widening of their external balances. Borrowing costs in many EMDEs are now below pre-pandemic levels, being supported by successful sovereign bond issuance. In aggregate, there has seemingly been little overall net change in external liquidity shortfalls for borrowers, with the rapid capital outflows of March 2020 having been rapidly recovered or plugged by other means.

During the COVID-19 pandemic, most EMDEs did not impose outright restrictions on capital outflows to defend their currencies, largely because of fears in developing economies that these would weaken their ability to access international markets or otherwise result in their being cut off from 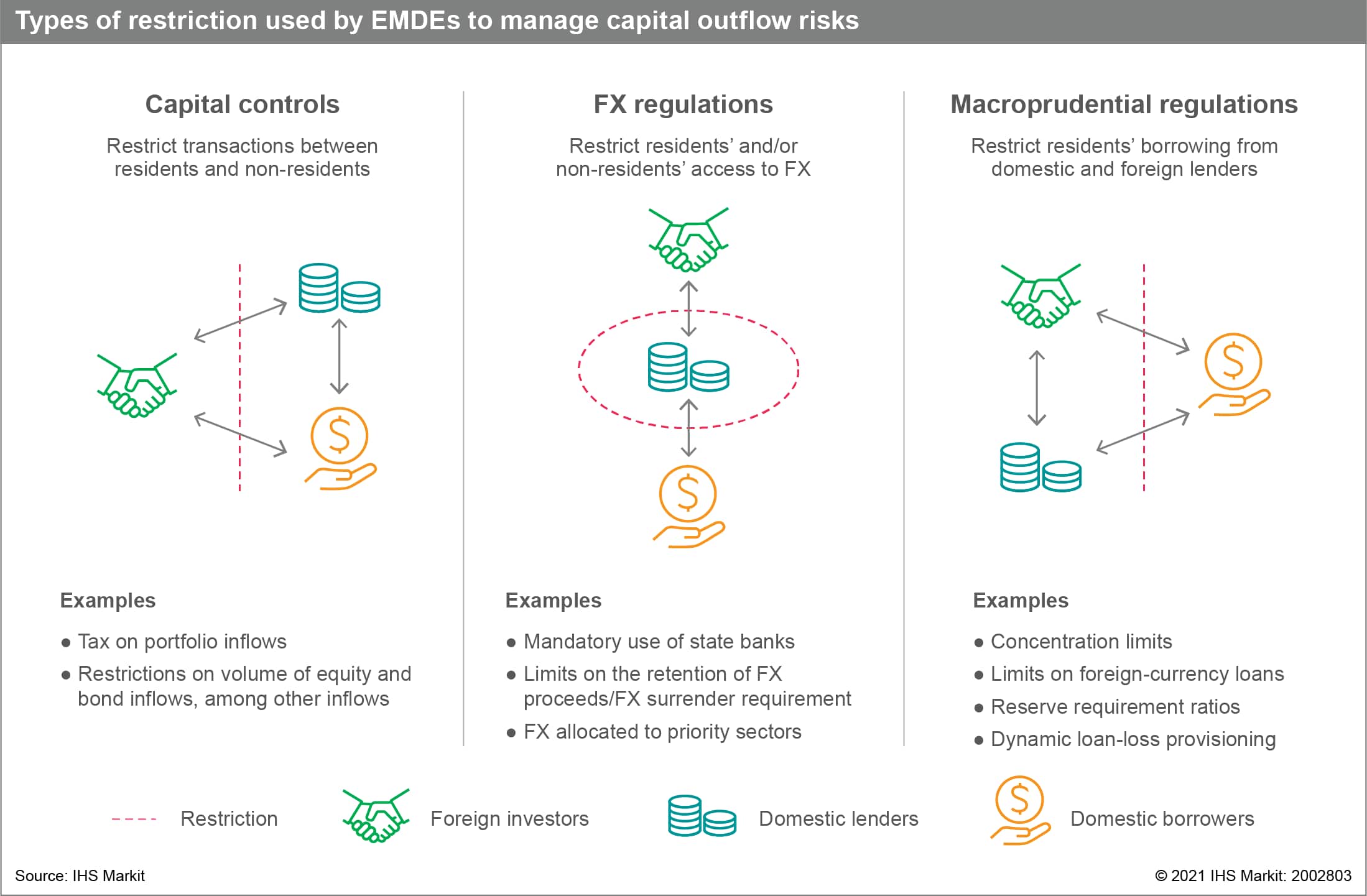 To assess the severity of policy responses to a potential sudden stop in net private capital inflows and to identify when such policy responses are most likely to be adopted, IHS Markit's economics and country risk team has devised a bespoke capital controls risk ranking, covering 69 countries in Latin America and sub-Saharan Africa (where data are available). The risk level ascends according to a 1-10 linear scale across four risk bands (Moderate, Elevated, High, Very high), where '10' (Very high) indicates a greater risk of severe policy responses (that is, outright restrictions) in addition to early signs of financial distress. The index comprises three core components: 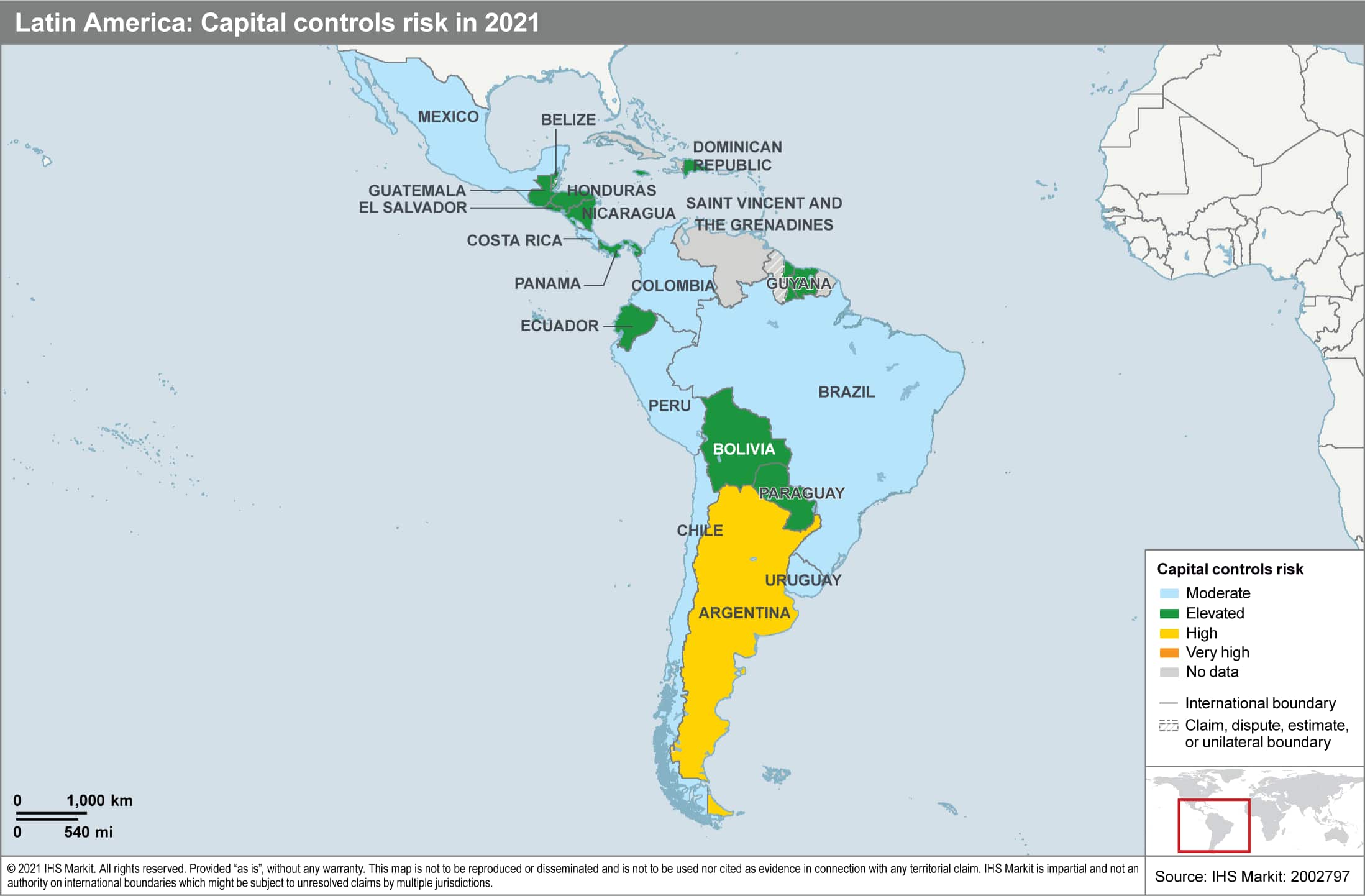 Unfortunately, headline consumer price inflation for April hinted at sustained weak consumer demand as it held steady at 1.4% y/y for a third consecutive month according to Statistics Indonesia and core inflation (which excludes government-controlled and volatile food prices) hovered for a second consecutive month at the record-low 1.2% y/y. There was minor upward pressure on food prices during the month, which may pick up modestly further as Eid al-Fitr is celebrated in May; otherwise, price increases were relatively modest across the other major components of the Consumer Price Index (CPI) indicating limited demand pressures. 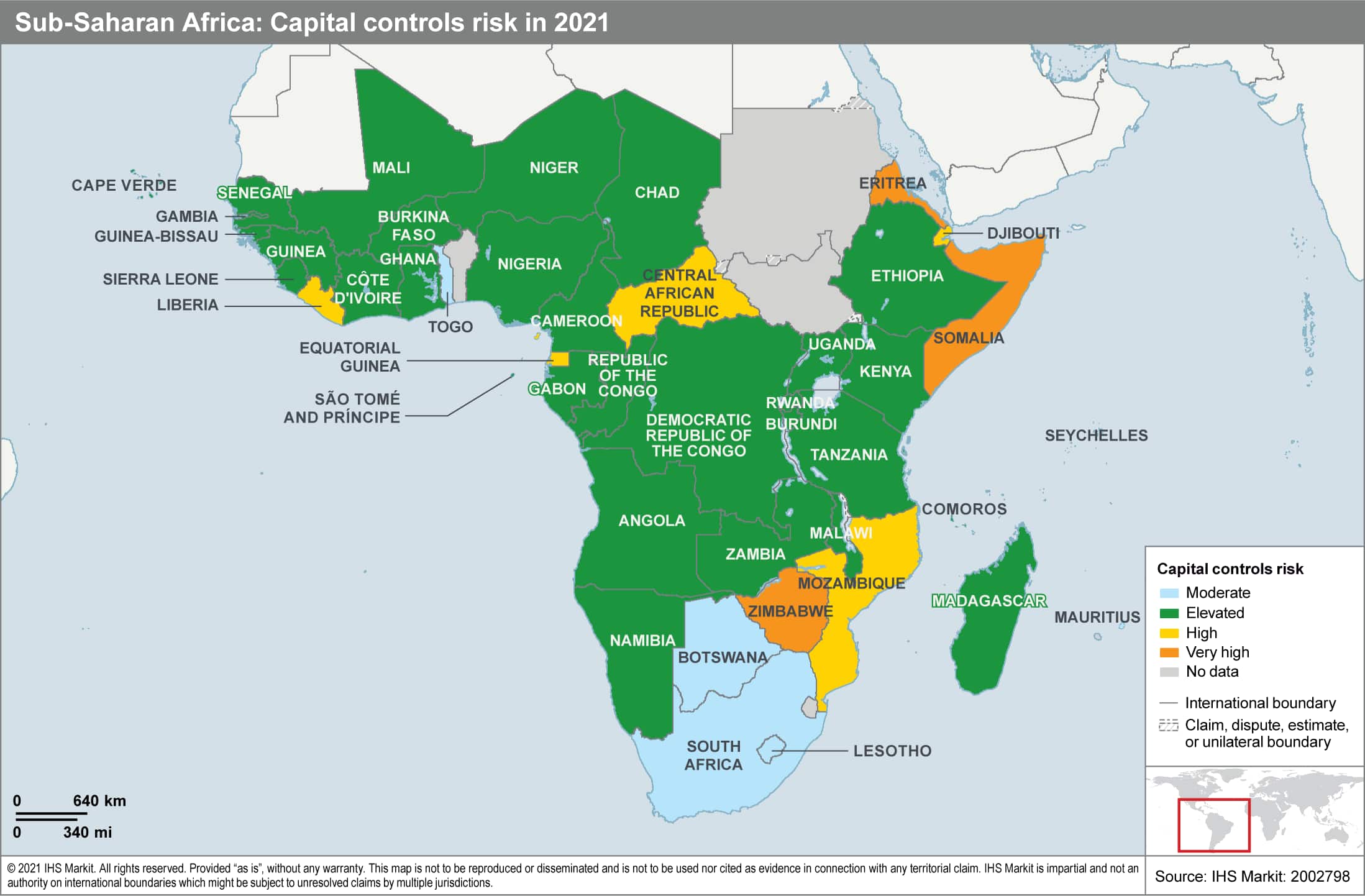 Despite the significant outflows across EMDEs initially caused by the COVID-19 pandemic, the imposition of strict capital controls has been rare and such measures have attracted little political support, other than in selected cases such as Argentina. More common tools to manage volatile capital flows are foreign exchange and macro-prudential regulations, which are typically used as part of a wider toolkit suited to an individual country's needs. Longer-term vulnerabilities stem primarily from the growth in foreign-currency-denominated debt burdens and the possibility of a future persistent rise in dollars rates increasing short-term debt distress and rollover risks, especially if inflationary fears materialize in the advanced economies. Aside from the potential for another high-impact long-tail event (such as a 'third wave' of COVID-19 virus infections, commodity price crash, or early rise in advanced economies' interest rates), there is implicitly a higher risk of a reversal of capital flows as borrowing costs with foreign creditors rise and, potentially, use of capital controls to stem outflows.