Although recent price and lending growth has been rapid in many Emerging Europe countries, housing prices in much of the region remain below the highs seen before the 2008-09 global financial crisis, while rising incomes have contributed to improved affordability.

Emerging Europe real estate markets have seen wide variations in recent years. Eurostat data indicate that 2017 housing price growth was fastest in the Czech Republic (up 11.7%), while all countries except Poland and Croatia recorded growth rates above the EU average. Although Croatia's modest price growth was unsurprising since the country has been Emerging Europe's weakest economic performer during the past 10 years, Poland's housing prices have been lower than anticipated given the rapid GDP growth and rising government spending. Despite rapid increases, last year's housing price growth was not viewed as excessive in most cases. Property prices have simply been catching up following steep declines amid the 2008-09 crisis. In a number of countries, property markets were hit further in the post-crisis years by depreciating exchange rates, making loans denominated in foreign currencies unrepayable for many homeowners and contributing to foreclosures. These problems were further exacerbated in January 2015 by the Swiss franc's appreciation against the euro, hitting Poland especially hard. Although Hungary previously had high rates of foreign-currency loans, that practice was discontinued by early 2015.

Only in the Czech Republic, Hungary, Estonia, and Poland are nominal property prices currently above levels seen in early 2008. In Poland, prices are only slightly higher than pre-crisis levels, while Slovak prices are slightly below. In the remaining countries, property prices remain far below early 2018 levels.

Development of mortgage market varies widely by country The Emerging Europe region's housing loan markets have shown considerable variation in recent years. Before the 2008 crisis, lending for house purchases was expanding rapidly, especially in the three Baltic states. Although Lithuania has finally caught up, Estonia and Latvia have suffered a decline in the share of housing loans to GDP since 2008. They have been joined in that trend by Bulgaria and Hungary, with the latter experiencing an especially sharp drop because of government measures to shift consumers away from foreign-currency loans. 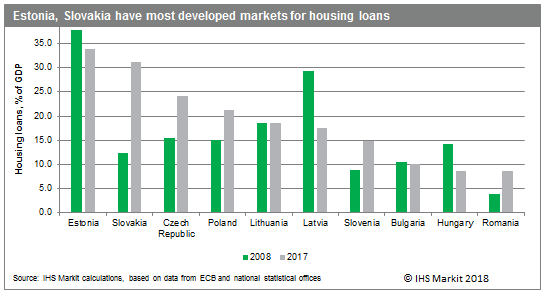 Elsewhere, lending for house purchases has expanded since 2008. Although the financial sector has been conducting more thorough risk assessments than it did before the global financial crisis, bank financing is plentiful in most countries. Slovakia has seen the fastest rate of growth in housing loans in recent years, with consistent double-digit growth. Growth is also robust in the Czech Republic and Romania.

In addition to falling unemployment and rising wages, low interest rates have been another key driver of demand for housing. In February 2018, interest rates on new mortgages stood at 2-3% in all five of the region's Eurozone members (Slovenia, Slovakia, Estonia, Lithuania, and Latvia) plus the Czech Republic. In contrast, the other countries in the region all had interest rates of 4.0-4.5%. Outside of Hungary, more expensive loans have kept housing prices under control in those countries. 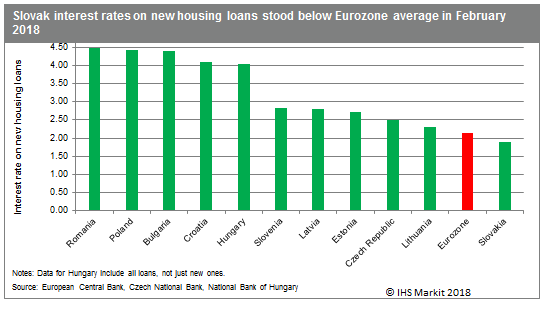 Constrained supply is a third factor that has driven up housing prices. In many Emerging Europe countries, the rental market is limited because of privatization programs in the 1990s that supported home ownership by selling flats to existing tenants. Although home ownership remains popular, new housing construction has been weak during much of the post-communist period. Meanwhile, the existing housing stock is deteriorating, as residential units built during the communist era often used prefabricated 'panel' technology, which tends to be of poor quality and was generally not intended for long-term use.

The recent rapid growth in housing prices and loans is expected to begin to decelerate in several Emerging Europe countries this year, thanks to tighter loan conditions, stricter central bank recommendations regarding mortgage lending, and the completion of new housing construction. Nevertheless, longer-term risks could mount, triggering further efforts to reign in lending and support faster housing construction.

On the demographic front, upside risks to housing prices stem from rising urbanization and the potential for return migration in the aftermath of Brexit. Moreover, with overcrowding rates currently much higher than the EU average, Emerging Europe residents could move to more spacious apartments as income levels converge with those in Western Europe, raising demand for housing. On the downside, demographic pressures may also have a negative impact on the housing market, as many countries in the region face shrinking populations. Downside risks are especially elevated in smaller towns and rural areas.