For the first time, the use of embedded touch modules in smartphones surpassed that of add-on touch modules, a feat achieved last year thanks to increased adoption by mobile phone manufacturers.

Shipments of embedded touch modules amounted to approximately 820 million units in 2016, representing more than 50% of total touch solutions for mobile phones, according to the latest IHS Markit Touch Panel Market Tracker Report. The rise to the top of embedded touch modules marks a critical milestone that indicates a notable change in both touch technology and the supply chain, as it now enables touch-panel makers to lead the touch display market that was once dominated by add-on touch module makers. 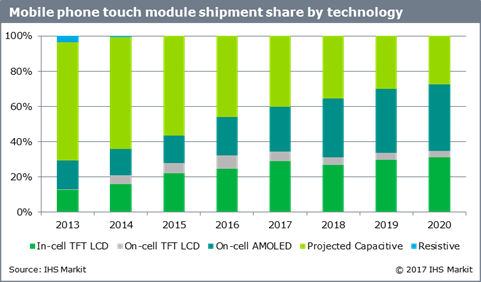 To be sure, display panel makers and add-on touch module makers have competed for a long time, but the tide started shifting when the two largest smartphone brands threw their support behind embedded solutions.

While Apple initially applied add-on touch solutions to the iPhone, since the release of the iPhone 5 in 2012 it has adopted in-cell touch, an embedded technology. Also helping the embedded market to grow is Samsung Display. In 2015, the South Korean electronics giant started supplying on-cell touch, also an embedded solution, for the company's active-matrix organic light-emitting diode (AMOLED) displays, which it calls Super AMOLED, in massive quantities to Chinese smartphone brands.

For their part, display panel makers were able to convince notebook PC brands to use embedded solutions in touch displays for computers, another factor that aided the embedded touch modules market. Notebook PC brands have shown willingness to adopt the embedded solutions of panel makers to reduce the thickness and weight of laptops. Overall, the percentage of notebook PCs featuring touch displays compared to non-touch solutions surged in the past year in global shipments, rising from 9.4% in 2015 to 26.0% in 2016.

Finally, the 2-in-1 PC-which utilizes embedded touch modules in its touch screen for the dual notebook and tablet PC functions of the apparatus-also helped the embedded space displace the add-on touch modules market.

As a result of the expanding use of embedded touch solutions in major IT and consumer electronics applications, the competitive landscape in the displays market is changing. And with the market now favoring embedded solutions, touch module makers on the whole are having to reset their relationship with panel makers-from being competitors to becoming partners, and living up to their new roles in the process.

As for add-on touch module makers now eclipsed by their embedded counterparts, the second-placers are now turning to larger applications, such as all-in-one PCs, automotive and interactive whiteboards, in their quest for new areas of growth. Some add-on touch tier 1 makers are also searching for fresh revenue sources in the new fine-assembly business involving display modules, cover glass bonding and fingerprint module assembly.