Brazil's National Electric Systems Operator (Operador Nacional do Sistema: ONS) in July reported deteriorating hydro-supply conditions and potential challenges to meet peak demand in November 2021. The country's Electricity Regulatory Agency (Agência Nacional de Energia Elétrica: ANEEL) has approved a 52% increase in the red flag tariff, the top band paid by heavy consumers, in an attempt to reduce energy consumption. The country has been significantly affected by unprecedented challenges to hydropower production after a sharp decline in hydroelectric dam levels; despite the progress made to diversify the Brazilian power mix over the last two decades, hydropower still represents 65% of the country's installed capacity.

The Minister of Mines and Energy on 28 June called on Brazilians to reduce their consumption of water and electricity.

The minister noted that the government has been taking measures to avoid rationing since late 2020, including activating thermoelectric plants and importing energy from Argentina and Uruguay. However, even assuming that the public complies with calls to be frugal with electricity and water usage, it is unlikely to be sufficient to ensure supply if rainfall levels continue to be below record lows. Reservoirs in the Southeast and Midwest regions, which account for nearly 70% of the storage capacity, are currently below 27% levels, the worst in more than 20 years. As a result, the National Water Agency (Agência Nacional de Águas: ANA) has declared a state of emergency in five states key to manufacturing and agribusiness production: Minas Gerais, Goiás, Mato Grosso do Sul, São Paulo, and Paraná. 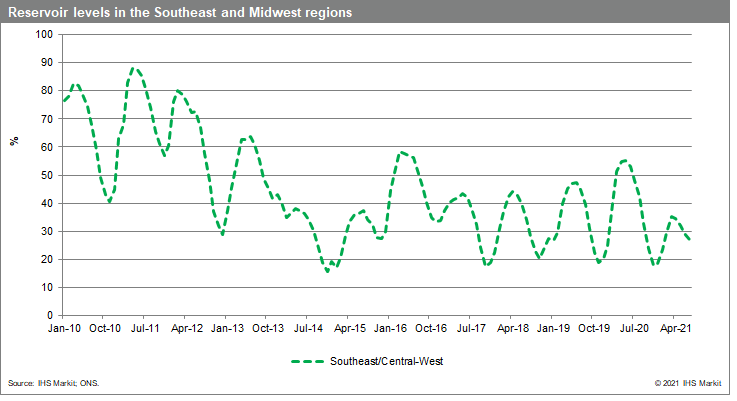 The tight balance between supply and demand will maintain spot power prices at high levels, above BRL500 (USD98) per megawatt-hours, and lead to increased prices for short-term contracts in the free market and further retail tariffs adjustments. With the growing thermal dispatch since October 2020, marginal operating costs of the Brazilian power system have climbed to the highest levels since 2015. Both wholesale prices and retail tariffs are therefore likely to result in higher production costs for companies operating in the manufacturing sector such as the production of automobiles, chemicals, and metallic products. Low water levels will also affect the agribusiness sector, which will experience reduced water supply for irrigation and impaired movement of cargo through waterways.

Increased participation of run-of-river hydroelectric plants, which have little to no storage capacity, has reduced the ability of the hydro fleet to cope with extreme weather conditions.

In addition to the relatively reduced storage capacity, shifts in rainfall patterns and droughts pose material risks for the operational dynamics of the hydro system. The largest reservoirs in the country have not been able to recover their levels throughout the last decade. With the current reservoir levels in the Southeastern region falling to 27% by July, Brazil's Independent System Operator ONS will maintain its operating policies to preserve the water stored through the dispatch of virtually the entire thermal fleet.

The Central Bank of Brazil (Banco Central do Brasil: BCB) on 4 August increased the policy rate from 4.25% to 5.25% and indicates further tightening this year. The hike reflected accelerating inflation, partly driven by electricity tariffs, which reached 8.3% in late June. IHS Markit forecasts a 5.5-6.0% rate by end-2021, and 6.5-7.0% in 2022. While high electricity will feed inflationary trends, relative price stability should return in early 2022 as world commodity prices level off and supply-chain disruption eases. This year's inflation trend is likely to remain upward as costs of thermoelectric electricity are higher than hydroelectric power. 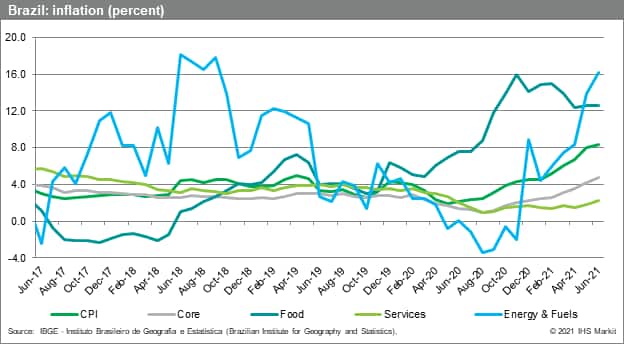 The government's plans to limit risks are unlikely to offset low reservoir levels.

The Ministry of Mines and Energy is leading a comprehensive action plan to prevent further depletion of the key hydroelectric reservoir including decreasing dependence on hydroelectric energy and expanding infrastructure and development for alternative sources. In the short term, these actions will provide some relief to the power system, but reservoir levels are still expected to drop to historic lows of 10% in November. Given the severe power supply constraints, there is a growing risk of the government introducing further measures to cope with the ongoing challenges in late 2021.