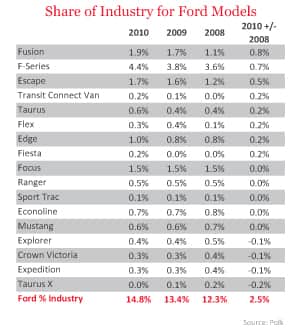 Ford's recent success has been driven by the Ford Division, as Lincoln has struggled with a lack of new products and Mercury has been discontinued. The Ford brand's share of the U.S. new light vehicle market has climbed 2.5 points from calendar year 2008 to calendar year 2010, an impressive amount. To put this in perspective, Ford's gain in share over this two year period is greater than the entire 2010 share of Subaru, Mazda, or Volkswagen.

And, Ford's share gain is not a fluke, i.e., it is not being driven by one model without which the brand would fall back. Rather, eight of Ford's seventeen models have gained share while only four have slipped, and three of those four declining products have eased by just one tenth of one point of share. The fourth model, the Taurus X, has been discontinued. This broad improvement in share across multiple models suggests the Ford brand itself has gained greater clout with the consumer.

Of the three models enjoying the greatest share increases - Fusion, F-Series and Escape, two recently have been redesigned, and one (Fusion) now is available with a gas/electric hybrid powertrain. These three models all participate in large segments that together represent almost half of the entire industry.

Ford has also benefited from positive consumer reaction to two incremental models, the Fiesta and Transit Connect Van. The relatively high fuel efficiency of each of these products lends itself perfectly to today's increased emphasis on that measure.

Ford's momentum is likely to continue as the all-new 2012 Focus will be launched this year. The Focus competes in the compact sedan segment, one of the biggest in the industry, providing the 2012 Focus with substantial volume and share growth potential when compared to its predecessor.