The US Natural Gas Liquids (NGL) market was expecting a far smaller stock change in NGLs than was revealed in Wednesday's Energy Information Administration (EIA) data release for the week ended May 25th. The EIA data showed an increase in NGL stocks of 2,044. The market, in contrast, had called for an increase of only 1,380 Mbbl, with views ranging from 700 to 1,800. While it's impossible to know exactly what the market consensus missed, it may be that many market participants skewed their estimate based on last week's unusually low inventory build which would have meant that their predictions about demand for propane was too high. The new IHS Markit US NGL Markets Weekly service, however, believed last week's low inventory build figure to be an outlier, particularly on the demand side. In our May 29th published issue, we forecast a stock change of 2,181 Mbbl.

Another prevalent topic covered in this week's report focuses on the Mariner East NGL pipeline. All pipeline operations through West Whiteland Township, Pennsylvania (about 30 miles west of Philadelphia, Pennsylvania, and about 40 miles northwest of the Marcus Hook LPG terminal) have been ordered to stop by a Pennsylvania Public Utility Commission administrative law judge, citing concerns surrounding previously reported pipeline leaks in the area and risk of further damage to West Whiteland Township water supplies. This is the second time operations on the pipeline have been halted, the first time lasting from 3/7-5/4. As the primary transportation feed into the Marcus Hook LPG terminal (one of two ethane export terminals in the US, concerns around the current state of ethane exports are obvious, but IHS Markit estimates that US ethane exports were actually stronger year on year for each of the months from March to May during the first halt. 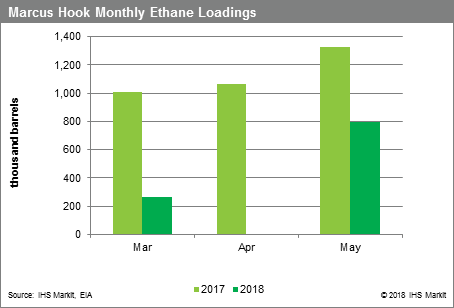 Using our Waterborne service, IHS Markit notes a switch from Marcus Hook activity to Morgan's Point activity in Houston, TX (the only other ethane export terminal in the US). This ability for ethane to export via another terminal could be key as the pipeline deals with another potential "long-term" outage, and because of this flexibility we have seen in the past few months, IHS Markit does not expect any material disruption to the current ethane exports. 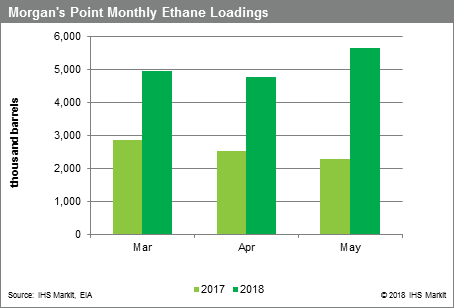 For a complimentary copy of our full report, contact omdcsales@ihsmarkit.com.
Find out more about the IHS Markit US NGL Market Weekly service.

Mark Meachum is a Director of Oil & Natural Gas Liquids with IHS Markit.