The overall performance of eurozone private sector workers deteriorated to the greatest extent in 67 months at the end of 2018. Faster rates of contraction in productivity were evident among service providers and goods producers, with the latter once again leading the downturn. Nationally, Germany recorded the quickest drop, followed by France. In Italy, a sustained increase in output per head in the service economy was insufficient to offset efficiency losses in the manufacturing industry. 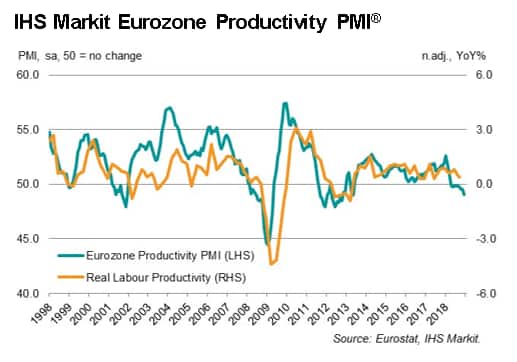 At 49.0 in December, the seasonally adjusted Eurozone Productivity PMI® - derived from IHS Markit's national manufacturing and services PMI survey data - pointed to a moderate decline in output per head in the currency union. Falling from 49.5 mid-quarter, the latest figure highlighted the quickest rate of deterioration in over five-and-a-half years.

Accelerated falls in output per head were registered in both the manufacturing and service sectors. In the former, the reduction was the sharpest in six-and-a-half years. Although only slight in comparison, the contraction at service providers was the quickest since May 2013.

Italy's service sector was the only one to post efficiency gains during December. The rise was the seventh in as many months, albeit marginal. At the same time, Italian goods producers noted a quicker worsening of labour market performance as sustained job creation coincided with ongoing declines in factory production. Hence, aggregate productivity decreased fractionally after growth had been recorded in November.

Germany remained the key source of efficiency losses, noting a quicker drop than France and Italy. The contraction gathered pace, reaching the fastest seen since August 2012. A marginal decline was registered in the service sector, one that was broadly similar to that recorded halfway through the final quarter. By comparison, German manufacturers posted the steepest deterioration since March 2009.

Following stabilisation during November, productivity in France's service sector worsened to the greatest extent in 32 months at the end of 2018. While services jobs continued to expand, business activity dipped for the first time since mid-2016. In the manufacturing industry, a combination of marginal job shedding and solid output contraction saw workforce efficiency weaken at the quickest pace in over five years. Subsequently, the Composite Productivity Index was at a 32-month low.