A week that kicks off with the findings from the largest global survey of business expectations also sees important data releases for the US, UK and China which have scope to steer policymaking at the Fed and Bank of England.

With worries about escalating trade wars and rising political risk dominating the media, IHS Markit's global business outlook survey, released on Monday, will give insights into the extent to which worries are feeding through to business intentions for the year ahead. The survey covers manufacturing and services in all major economies, based on the companies that contribute to the monthly PMI polls.

With the next Bank of England policy meeting looming on 2nd August, a fresh clutch of UK official data releases will give guidance on whether interest rates will rise. Three of the Bank's nine Monetary Policy Committee members voted to hike rates at the last meeting, and PMI surveys and new monthly GDP data have since shown the economy rebounding from a soft patch earlier in the year, as expected by the Bank. If labour market data show rising wage pressures and inflation numbers indicate sustained upward price pressures, the odds of an August rate hike will shorten. Official retail sales data will also add clarity to the health of consumer spending in June. 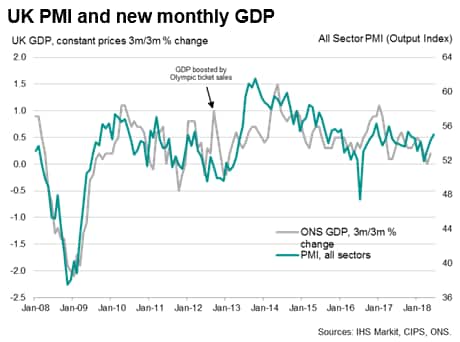 US production and sales data

Official updates to US industrial production and retail sales numbers are updated for June, and will be eyed for signs that the Fed will continue to hike rates in coming months. Retail sales numbers may soften slightly after better than expected gains in prior months, but are likely to once again show a healthy profile of consumer spending at the end of the second quarter.

Similarly, US industrial production data are likely to rebound from a decline in May, after PMI surveys showed the goods-producing sector faring well in June. However, we argue that ISM numbers continue to overstate the recent pace of manufacturing growth, and that the IHS Markit surveys show a more accurate picture of the sector losing growth momentum. 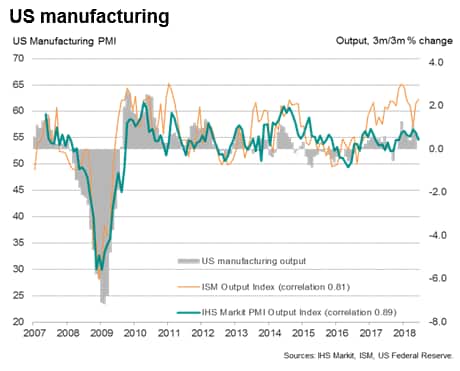 The first estimate of second quarter GDP is widely expected to show the annual pace of economic growth moderating from 6.8% to 6.7%, in line with government targets. However, the PMI data that IHS Markit produces for Caixin suggest there may be some upside potential to the estimate. The PMI has so far this year indicated the best performance since 2011. Providing further interest will be the accompanying releases of industrial production and retail sales numbers, which are likely to show the economy becoming more dependent on domestic spending. 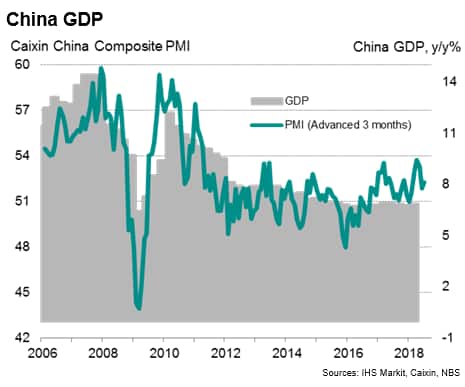 After raising interest rates three times in the two months to support the rupiah, Bank Indonesia is widely expected to pause its tightening cycle at its next policy meeting. The rupiah has depreciated 6% against the US dollar so far this year. Governor Perry Warjiyo recently commented the central bank has to use other measures to support the economy and to stabilise its currency. The policy rate currently stands at 5.25%, up 100 bps since May. That said, further tightening cannot be ruled out if US interest rates rise at a faster pace than expected and capital outflows persist. Latest Nikkei PMI data indicated weaker growth in manufacturing activity at the end of the second quarter.

In Malaysia, analysts eagerly await updated inflation data, which will provide official insights into price movements since the country's sales tax was scrapped at the start of the June. Nikkei PMI data had signaled in advance the disinflationary impact of the GST removal, with input cost inflation among manufacturers easing to the weakest in over three years. Weaker inflationary pressures - or even deflation - in coming months could raise expectations of a rate cut.

Download the report for a full diary of key economic releases.